A Flagship GNSS Rover Gets a Major Upgrade

The first generation of Trimble’s flagship GNSS rover, the first R10, was announced six years ago at the Intergeo 2012 Conference and Exhibition. While updated incrementally over the years, the R10 Model 2, or R10-2, is a major upgrade. It may look the same, but that familiar form factor belies the changes within. For one thing, it has a completely new ASIC (application-specific integrated circuit, the heart of a GNSS board) under the hood. There are power consumption enhancements, more channels, tracking and processing of more signals, more support for mobile systems, increased internal memory, and more spoofing and interference hardening.

The R10 is a very popular model of GNSS rover; I see them everywhere. Although it’s one of the most popular models ever, it could benefit from periodic improvement (there is no such thing a miracle box). The R8 series (with the hamburger-on-a-pole form factor) is also quite popular, but the R10 (perhaps it could be described as a gelato-container on a pole form factor) could be considered their flagship rover.

New models and updates are an imperative for manufacturers of the high-precision surveying instruments and rovers we use daily. Upgrades, updates, and new models are the currency of such instrument manufacturers and may seem significant only if they did not occur on a regular basis. The significance of this new model may reside deeper in the details, but I must note that the impetus for this post on this new model came from the questions we received from our readers as soon as the press release hit the web—questions that went beyond those answered in the press release. 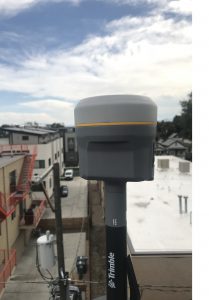 The form factor looks the same, but there’s a lot of new stuff under the hood. Photo: Andrew Salmon

You can see the spec sheet online, but here is a thumbnail of the new features on the R10-2:

Rather than seek insights from the marketing side, we asked to speak to the product manager for the R10 series, and Trimble’s Andrew Salmon was happy to oblige. Salmon, who studied geomatics at the University of Calgary (with a focus on cadastral surveying), speaks the language of surveyors. I’ve noticed that many of Trimble’s product managers began their careers as practicing surveyors (and quite a few from that same Canadian university eh?).

My first question was: “Why upgrade a successful model?”

“For us, this is showing our commitment to our customers who have been using this system at the top end of our integrated portfolio for some time now,” Salmon said. “And really to bring them in line with the latest in our technology. The R10 has been really successful for us. We are happy to see people continuing to embrace it enthusiastically, and we aim to build on this in the future.”

What is the new engine? “The new ASIC is also in the new Alloy base receiver, and SPS 986. It is a new generation ASIC. The R10 has its own board inside because of the form factor—not the same as some of the off-the-shelf boards.” E.g. the BD970 OEM board, or the other boards inside other models.

Why the extra channels? Weren’t the old 440 channels enough? “Obviously as the years go on we are seeing more and more satellites being put up in the different constellations. We’re tracking and processing more signals from each of these constellations. For instance, in this product we’ve added the Beidou B3 signals, Galileo E6, and the Navic [IRNSS] L5 signal. Many of these are just now getting implemented. In different parts of the world, like Southeast Asia, people are starting to see really high numbers of satellites in view, so that’s one component of it.” A new board design provided an opportunity to improve in other areas, Salmon added. “With [it] we managed to gain better battery life; we have much more efficient ASIC in this system.”

The R10 has been tracking and processing multiple constellations for some time. Note there is a big difference between simply tracking signals—relatively easy to do—and actually processing them in real-time solutions. A system can have a gazillion channels and track everything in the sky but not use many of them (reminds me of the old social satire song Bruce Springsteen sang: “57 Channels (And Nothin’ On).” The challenge is in integrating signals).

Salmon said they have added to the long list of signals already utilized by the R10, adding into the R10-2 the Beidou B3, and Galileo E6 signals (already using E1, E5a, E5b, and Alt BOC). I asked if all those channels can be used in the HD-GNSS solution. He said that it is able to “track them all and use them all in the code positioning engine, with a subset used in the full multi-frequency real-time solution. And then we have the ability to offer additional functionality for early adopters and federal agencies that may want to use these signals for purposes other than real-time surveying.”

Signals can be looked at in different ways. For different solutions an individual signal on any given satellite might be tracked by more than one channel. For instance, if you have 10 GPS in view, tracking 4 signals each (and tracking some signals on multiple channels), then add a half dozen (for now) Galileo with 5 signals tracked from each sat, 8 Glonass with 2-3 signals … this could add up to a lot of channels. In summary, Salmon said that the impetus for more channels was to “be able to bring the best performance in all environments, but to also serve a wider set of uses, some already in play, and some that are on the horizon.”

Several folks asked me, “Are the extra channels just for marketing?” I wasn’t going to insult an engineer with questions about marketing strategies. I believe that his explanation about signals, processing, and serving multiple uses support the case for the extra channels being based on practical engineering considerations.

Also consider this: if marketing were the motivation, then why didn’t they just make it over 1,000 channels to have the bragging rights. Like “Woo-hoo! We have the most!” Fortunately, for us end users of high-precision surveying gear we rarely see much of that kind of pure brinkmanship among the major manufacturers. Typically, in my experience, I see that GNSS engineers are looking out for our interests and are not being driven purely by marketing whims. Of course, on the other hand, the outfits that are a bit late on implementing the new constellations might not be inclined to promote the value of those extra satellites—not yet. I guess if someone does not make or sell hammers, they might want you to question the value of nails.  ?   All kidding aside, as the new constellations grow, folks will be able to experience and judge the value for themselves.

In summary, the R10-2 appears to be a timely, appropriate, and worthy update of a popular and capable GNSS system. And as for the extra channels, Salmon said, “More signal availability provides the positioning engine with more inputs with which to compute a solution. Every surveyor knows the value of redundancy in deriving precise and reliable solutions, and positioning with GNSS is no different. Having more satellites and signals available is beneficial because it enables selective algorithms to be applied—e.g. to optimize satellite geometry for a given measurement—which may not have been practical in the past. In short, we’ve got loads to choose from, and it’s up to us to make the best use of the choices available to us.” 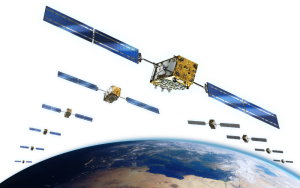 Holy crowded skies, Batman! So many new GNSS sats being launched all the time … they are being launched 2, 3, even 4 at a time! We are headed for exciting times. Image: ESA.

Warning: a little bit of semi-related editorializing ahead. You do not have to follow every new path to be able to do your work, but sometimes we miss out on some pretty big leaps that we might not notice amid the steady succession of incremental changes. This could be said of surveying gear in general, and not just the R10, but it is a popular example.

I often hear my fellow surveyors state that in clear sky with even legacy GPS-only gear they can achieve high precision and that all the extra satellites and signals might not make any difference. Sure, I can still do wonders with an old 4000sse I have on the shelf; back in the day, folks worked wonders with a single signal (and then two). But imagine what developers will (and have already begun to) do with the new signals? E5a, E5b, E6., L5, etc. There may be gains ahead we would have never anticipated.

Who knows, we might be looking soon at sub-cm in conditions we might not try today, with no external augmentation needed. Almost there: No-base-needed has been around for about 20 years in the form of real-time networks, but now with PPP solutions like Trimble RTX (useable by R10s old and new) recently announced as now being capable of under 1-minute convergence and 2cm (h) and 5cm (v) … who knows what might be next with all of these constellations headed for completion and the inevitable innovation that will come from all of those new modernized signals.

Care to take an old rover for a drag race against a new one?