PSM continues to profile surveyors and surveying firms that have grown by developing markets with an eye to the future of the profession. Enjoy this profile of a very successful firm that has done just that. 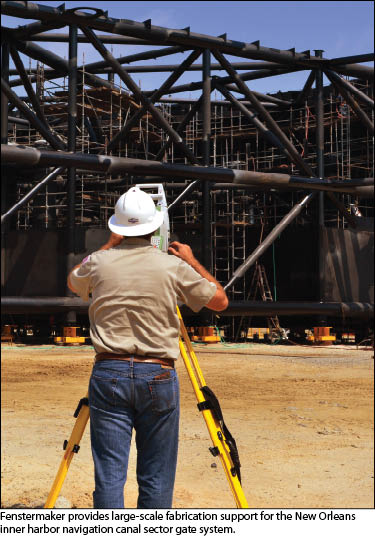 Over the past 60 years, Fenstermaker & Associates has grown from a small surveying company that primarily served the Louisiana oil industry into one of the largest multi-disciplinary consulting firms in the South. Still offering surveying and mapping services, Fenstermaker now also specializes in engineering, environmental sciences, and advanced technologies.

A willingness to innovate and adopt new technologies has been a driving force in the company’s growth from the start, explained William H. Fenstermaker, chairman and CEO, whose father started the business in 1950. This focus on innovation led the firm to pioneer implementation of GIS technology in the oil patch as a new way of extracting and displaying information from the map data it created for clients.

“We always were a technology company in that we had a lot of fast computers that allowed us to assemble large volumes of information about a project, which allowed a client to make good business decisions,” said William Fenstermaker.

From GIS, it was only a small step for the firm to adopt GPS technology once accuracy met the specifications of mapping and surveying projects. In both cases, emerging geospatial technologies fostered company growth in existing markets and applications while enabling the firm to expand its service offerings into broader business sectors.

More recently, business expansion at Fenstermaker has been driven by yet another geospatial technology: high-definition laser scanning. Laser scanners are sometimes deployed in support of the firm’s traditional services, but they have become a cornerstone of an entirely new division as well, Advanced Technologies. This group has developed into a stand-alone profit center with its own clientele, which in turn has led to growth in new and unexpected markets.

Ryan Fuselier, director of Advanced Technologies, first read about high-definition laser scanning in a magazine and saw it as a potential complement to the firm’s existing surveying and engineering work. He made inquiries among survey equipment vendors and learned that Leica Geosystems had embraced the technology in a big way, offering a wide range of terrestrial laser scanners for a variety of applications. 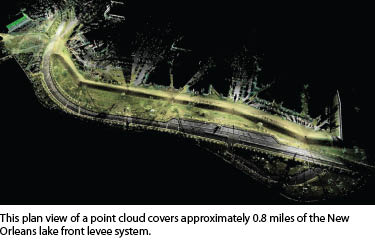 Fenstermaker was sold on scanning after a Leica representative accompanied Fuselier on a couple of projects in the field and showed him how the units could be used to quickly and accurately collect 3D measurements of terrain, building structures, and interior spaces. The firm bought its first device, a Leica ScanStation, in 2006. This particular scanner was chosen because it offered long-range capabilities suitable for outdoor applications related to civil engineering and surveying.

“We first approached the laser scanning market not knowing really where the money was going to be,” said Fuselier. “We built our own market base … we knocked on doors and gave demos.”

One of the first and most extensive deployments of the new laser scanner came in the aftermath of Hurricane Katrina along the Louisiana Gulf Coast. During the massive storm, many levees that had been built to protect New Orleans from surging flood waters had been heavily damaged. Repairing them was the responsibility of the U.S. Army Corps of Engineers.

“They needed to upgrade the levee system that follows Lake Shore Drive on the south side of Lake Pontchartrain,” said Fuselier. “We decided to survey it with the scanner.”

The Corps asked for highly accurate topographic and cross-section data along that entire stretch of levee. The project area covered a 500-foot-wide swath of land between the lake and levee for six miles. In addition to the levee structure itself, this strip included houses, parking lots, roadways, parks, and sidewalks. Fenstermaker chose the laser scanner over traditional survey equipment due to the volume of information and level of detail the Corps wanted included in the survey. 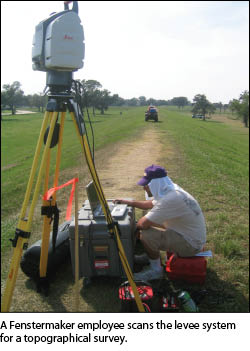 Choosing the scanner “wasn’t so much an issue of time—it added a sense of comfort because there was so much topography to capture, and we felt traditional surveying would probably miss information,” said Fuselier. “If we captured everything in the point cloud [with the scanner], we could keep going back to it and extract data if we were missing features rather than sending crews back to the field.”

To comprehensively capture the entire area of interest, control was first established using RTK-GPS at 400-foot intervals along the six-mile stretch. These would play two roles, serving as tie points to merge separate scans and to georeference the resulting 3D models with the local state plane coordinate system. Working in the Leica Cyclone software designed to support ScanStation data, the technicians merged the individual scans into a single 3D point cloud of the entire levee section. Point cloud data was prepared for surface generation and a digital terrain model (DTM). The DTM was then generated from the data set. Surface features, planimetrics, and contours were also extracted. The firm delivered final products to the Corps in MicroStation format.

The 3D model of the project area was well received by the Corps. Instead of having a series of contour cross sections surveyed every few hundred feet or so (as would have been done with traditional survey methods), the Corps had an extremely accurate as-built model of the actual levee condition. For engineering and construction planning, the information content was almost infinite because there was no interpolation of points between survey cross sections.

Katrina opened other applications to laser scanning as well. Fenstermaker was contracted to scan pump stations, a ship building dry dock, warehouses, and other structures following the hurricane for engineers to use in assessing their structural integrity before either condemning or clearing them for occupancy. 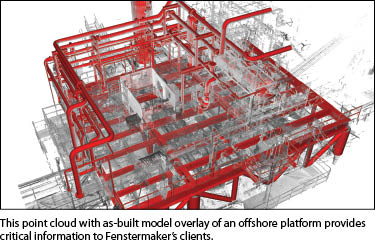 Through its Advanced Technologies group, Fenstermaker continued to look for new scanning opportunities and focused on an industry it knew quite well, oil and gas. While much of the firm’s surveying and engineering business in the oil patch had been upstream, the new division looked farther downstream, finding an important niche that was largely un-serviced at the time.

“The primary market for laser scanning that we found, being surrounded by oil and gas, is in the refineries and plants,” said Fuselier.

He explained that oil refineries and natural gas processing plants undergo frequent upgrades and retrofits involving the installation of new pipes, mechanical equipment, and structural supports. For the engineers designing these installations in a CAD environment, the challenge is making sure the new equipment fits into a space that is already congested with a maze of pipes, structural steel, and conduits. An accurate, up-to-date, as-built model of the entire unit or facility is critical.

“Having a comprehensive method for as-builting is hands down the way to go,” said Fuselier, adding that most refinery and plant operators have now accepted laser scanning as the most efficient way to capture the as-builts.

To complete these as-built modeling projects that typically take place in interior structures, Fenstermaker added a second device to its arsenal, a Leica HDS6000 phase-based laser scanner, which was designed specifically for extremely fast capture of detailed point cloud data sets in smaller areas than the longer-range ScanStation. Together, the two devices gave the firm the abilities to perform both long-range and high-speed laser scanning. 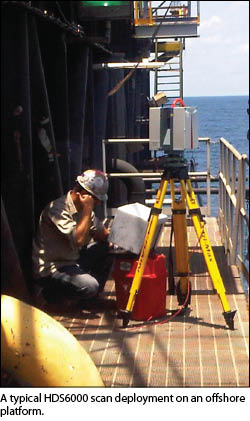 Oil and gas facilities account for the lion’s share of scanning work conducted by Advanced Technologies now, and nearly three quarters of that is performed by the phase-based scanner, Fuselier said. The division is now performing more than 30 3D laser scanning projects per year.

If there is a typical scanning project for Fenstermaker, it would be a recent job completed on an oil platform 50 miles out in the Gulf of Mexico. The operator wanted to install a new compressor system in the center of the 45’x 90’ platform. The objective was to fabricate the unit offsite on a skid and then slide it into place on the platform. If the design was correct, the compressor would fit perfectly with all tie points aligning.

Ultimately, the project illustrated why a scanned as-built is a necessity even on structures where original design drawings are available. Over years, steel support beams on the platform had deformed due to heavy loading on the decks, and the beams had begun to sag. These minute sags in what had been perfectly straight beams were captured in the point cloud and taken into account by the technicians designing the compressor skid.

Fenstermaker collected 16 scans on two decks of the platform over two days using the phase-based laser scaner and created a 3D structural model of the space from the point cloud. Within three weeks, the firm’s technicians had extracted all of the pipe features in the space and delivered an intelligent CADWorx piping model to the design engineers.

“The contractor did the install of the compressor skid, and everything came off without a hitch,” said Fuselier.

When Fenstermaker invested in its first laser scanner, the firm saw a niche that its competitors weren’t filling, but it was not sure the technology would pay for itself. Today, however, the Advanced Technologies division is a thriving profit center that performs scanning projects on buildings, bridges, and dams in addition to its refinery and plant work. The company has even scanned a streetscape for use by a visualization firm in creating an immersive environment for marketing purposes.Adoption of the scanning technology has also led Fenstermaker into some entirely new work arenas. While scanning the superstructure of a bridge that had been hit by a river barge, the firm realized inspection of the submerged pilings and foundations was just as important to assessing the above-water damage. The Advanced Technologies team developed an underwater acoustic imaging and measurement system that has since been used to survey numerous submerged structures for routine monitoring as well as disaster recovery operations. 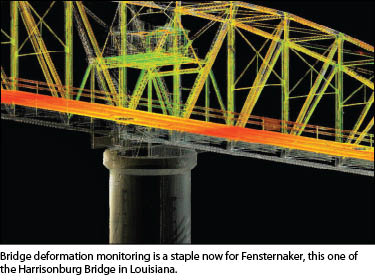 Dimensional control is another service now offered by the company as a result of its involvement in laser scanning. In these projects, which are usually conducted at riverside fabrication yards, survey teams use reflectorless robotic total stations to ensure that precise design specifications are being met to tolerances between 1/16th and 1/8th of an inch during construction of large modules destined for installation on offshore platforms and land-based refineries. For this work, Fenstermaker has two Leica TDA5005 metrology-grade total stations and two TS15i imaging total stations.

“We use coordinate-based surveying resectioning methods to pinpoint deviations throughout the modules on equipment tie points, pipe tie ins, and mating components,” said Fuselier, explaining that dimensional control during fabrication ensures the module installs perfectly when it reaches its final destination either in land-based refineries or offshore.

The related markets for laser scanning, underwater acoustic imaging, and dimensional control have evolved quickly in the past six years within Fenstermaker’s Advanced Technologies division; it now has seven teams trained in applying them separately or as integrated workflows.

According to Fuselier, it was the high level of accuracy required for scanning that compelled the company to develop new, more refined workflows that ultimately opened the door to further business diversification.