As a Canadian data-collection firm scans the horizon, it sees growth in its geo-referenced 3D photo services.

Are you looking for ideas on how to expand your surveying services? How’s this for a cogent business model: Familiarize yourself with a particular industry full of potential clients, form a company committed to serving that industry, take steps to ensure you have the latest technology available to help you offer a unique product or service, and provide a level of support so solid your contribution is both needed and valued.

This is essentially the roadmap followed by Vieworx Geophoto, Inc., an Alberta-based specialist in the collection, manipulation, compilation, and presentation of geo-referenced data. Currently focused on providing its services to western and west-central Canada oil and gas customers, the company sees opportunities in a broad range of additional industries and markets. Armed with technology ranging from Ladybug photo imaging cameras (both ground-based and aerial) to a pair of Topcon IP-S2 HD mobile mapping systems, Vieworx is definitely on track to make that vision a reality.

Formed in 2008 by longtime construction veteran Mike Head, Vieworx is the outgrowth of a service Head had been supplying to his customers as part of the preparation for work on their projects, according to Troy Head, his son and another principal in the firm. Mike “has, to one degree or another, always been ‘scouting’ properties for his construction customers and knows the difficulty in trying to send someone somewhere: describing where they have to go, what to look for when they get there, and so on. At the same time, he knew that every oil or gas company that he worked for had to have its pipelines flown and either photographed or filmed on a regular basis. He saw the benefits he could provide by combining the two efforts—flying the pipelines and improving the quality of the data presented to the customer—and started Vieworx.” 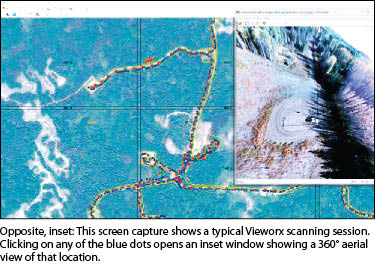 It should be mentioned that the “flying” part of that equation was made much simpler by Troy Head’s penchant for helicopters, a love he’d had since graduating high school and that his parents wondered would ever amount to anything. Today, Troy regularly flies a Robinson R-44 helicopter, the key component in the company’s aerial capability.

“For the first three years we were in existence as a company, our service consisted of either driving a customer’s property with a vehicle equipped with the Ladybug camera system [Point Grey Research, Richmond, BC, Canada], or flying the R-44 equipped with that same camera system,” says Head. “In either case, being able to present the customer with fully geo-referenced 3D photos of their property was a major step forward for oil and gas companies who were used to just getting conventional photos taken as a plane flew over their pipeline. At that time, in a sense, we weren’t really offering them anything new, just something a whole lot better.” 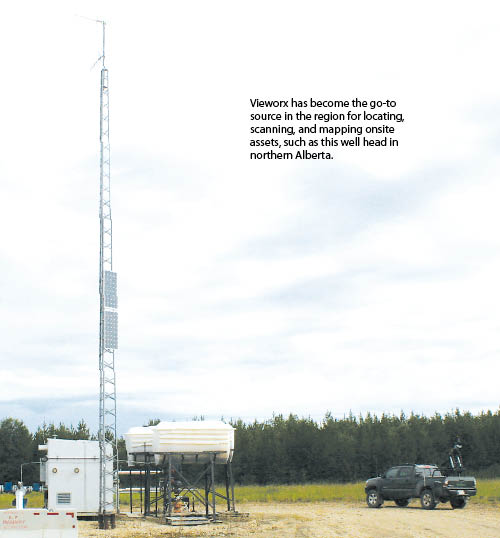 While the service Vieworx was offering was better than anything else available at the time, Head says that almost every time they presented their product to customers, they were asked if objects could be measured simply by clicking on one of the photos. Although there was obviously an interest there, the answer, he says, was always, “No.”

Head continued, “In talking with the people at Brandt, our Topcon supplier with whom Mike had a long and successful relationship from his construction days, he found out about the IP-S2 HD scanner, a new mobile lidar system that was available from Topcon. Once he knew that such a scanner could bring a measuring capability to the Ladybug images, the wheels started turning. We did a fair amount of research into the matter and saw that with the scanner, we’d be able to drive a jobsite and capture high-density lidar data along with fully geo-referenced 3D images. This was an exciting combination that would allow us to offer our customer something both new and improved. And, before long, we took delivery of our first lidar system.”

Mounted into the bed of a Toyota Tacoma pickup truck, Vieworx’s scanner is making believers out of skeptics as Troy Head and other colleagues drive routes throughout customers’ massive land leases, generating data, mapping assets, marking onsite hazards, and more. “This is precisely what these companies have been looking for,” he says. “All the larger oil and gas companies are looking for asset management, particularly in newly-acquired leases. Many of them really don’t know what they have out there, so we go out, scan it, and tell them with our data.”

Head says a typical scanning session involves heading out to the client’s site and driving a pre-determined route. Any problems—a broken culvert, a washed-out area, a pile of debris left onsite, anything out of the ordinary—is marked on the map with a waypoint indicated by a red triangle, to be later accessed and viewed in 360° mode with the simple click of a mouse. The company’s scanning technique is quick but thorough.

“Back in the office, armed with this set of data, everyone from a laborer to the company president can view the bigger picture and make better-informed decisions,” he says. “And later on, that data can prove beneficial for use in as-builts, for new construction planning, and more.” 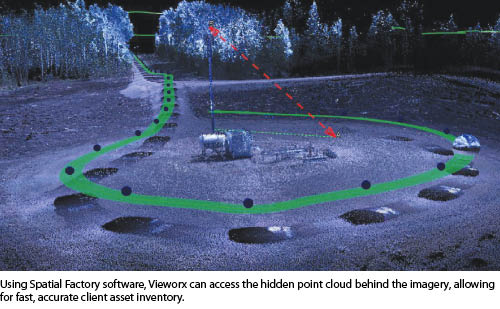 Vieworx’s IP-S2 HD is comprised of a single scanner with 64 individual lidar sensors that generate a high-resolution 3D point cloud of everything Head encounters as he drives his routes. The unit, that can generate up to 1.3 million points per second, is designed to scan the road surface as well as adjacent structures, landscape features, roadside hazards, etc., to a distance of 100 meters to either side of the vehicle.

The scanner “box” itself—also mounted as part of the external instrument package—has multiple sensors that maximize positioning by determining the vehicle’s position and attitude on a real-time basis, while a dual-frequency GNSS receiver tracks both GPS and GLONASS signals. Accuracy is further enhanced through use of vehicle wheel encoders by comparing rotation speeds. Rounding out the package in place at Vieworx, the Ladybug camera system shoots 360° digital images at a rate of six pictures every three meters—images that are stitched together in post-processing to produce a spherical street-level-type photo that can be accessed in conjunction with the point cloud data.

“This is one aspect where the full system really shows its value,” says Head. “Looking at that photo—with the point cloud data discretely behind it—the customer can select two points and accurately measure, say, a pipe rack or the diameter of an existing pipe. They can determine the height of that pipe rack to see whether or not a truck can gain access. In the past, if this data wasn’t acquired during a traditional survey, a crew would have to go back out and measure it, costing both time and money. Now, the data can be accessed at any time, and those numbers are always available.” 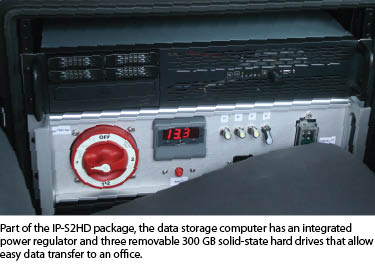 He adds that another area in which the system really shines is with the density of the point cloud and the range from which data can be gathered. Grabbing data out to 100m allows them to get more information in one pass of the vehicle, thereby minimizing the time spent in the data-collection part of the process. “The increased density and range of the scanner also gives us more detail on smaller objects, which expands our application possibilities for the system,” says Head.

Just getting to that point took a good deal or support and commitment, and Head says the staff at Brandt Tractor were outstanding in providing that help throughout the process. “Everyone at Brandt has just been on board with us from the outset, working to make the transition a smooth one. We like to do a lot for ourselves here, but there’s no denying that people like Paul Wheeler and Jason Stephen have helped with both technical and sales-related help.”

At the heart of the post-processing effort, according to Morgan Beaupre, Vieworx’s business and operations manager and a partner in the firm, is Geoclean, a Topcon software bundled with the scanner. “Geoclean is our tool for processing all the data as one unit,” he says. “It is very user friendly and is ideal for converting the files generated during our data-collection process into LAS data that can then be viewed and utilized in Orbit GT software (that Brandt recommended) and bundled together with the system. We’ve found Orbit GT to be great for extracting specific features from our file as well as for viewing the data. We can easily export from Orbit GT into industry-standard file formats compatible with CAD and GIS software.”Beaupre says that Orbit GT serves as an excellent platform even for customers without much experience working with surveying or mapping data—most of their client base—to extract features and data by simply clicking on a photo to get their measurements.

According to Beaupre, Orbit also offers a web publishing module that allows Vieworx to host it on their server and lets users log in from anywhere in the world and view their data by internet or iPhone or iPad. “They can see any map set we have and selectively view the imagery that exists for any particular area. It’s a really valuable asset for everyone involved.”

While everyone at Vieworx is extremely pleased with the strides they’ve taken with their mapping efforts, Troy Head feels they’ve barely scratched the surface of what can be done with these new surveying and mapping technologies. “We have enjoyed a good deal of success with area oil and gas companies and we look forward to continuing to serve those clients,” he says. “But we also see an unbelievable amount of potential in areas such as utility line work: measuring heights of infringing trees, monitoring the sag of lines, conducting inventories of power poles, and so on where the high-density and long-range scanning capability of their scanner will really come into play. We can also see a place for GIS-type work with cities and municipalities, as well as with the Royal Canadian Mounted Police doing accident investigation work—there are so many possibilities this technology can offer.”Given their track record for getting things done, it’s doubtful that those areas will remain untapped for long. In fact, it was only months after that initial scanner purchase that Vieworx contacted Brandt about a second unit that is now at work, mounted on an identical Toyota Tacoma. “The logic behind that second purchase was simple,” says Troy Head. “If you have two units, you can double the volume of work done in one day. We feel the sooner our customer gets the data, the sooner it can begin helping them, so we really pride ourselves in how quickly we can turn a project over.”

Getting to the point they are at now, he says, has meant changing a lot of mindsets. “Using these tools is a shift from the way data collection has been done in the past. We have learned that if you can show a person—or a large company—the benefit of that change, they will be more likely to embrace it,” says Head. “Our company tagline is ‘Sharing the Vision.’ We definitely feel that, in every sense, we are equipped to do that now.”