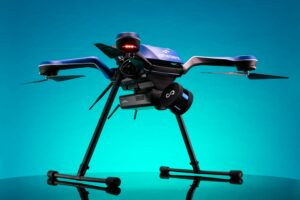 To a certain degree, autonomous operations are already baked into the current state of data collection (aka reality capture) software for UAVs. Pre-mission planning consists of using a map-based interface to highlight the area that needs to be mapped or inspected, the appropriate flight pattern and height (AGL) is selected along with any other pertinent criteria.

After all the requisite mission parameters are input, the operator simply clicks the “go” button and initiates the mission. The software does the rest: maintaining the correct flight pattern, imagery overlap, and AGL are all performed autonomously. For good reason too, trying to manage all these factors while flying UAV missions manually is exceedingly difficult, well-nigh impossible for most operators.

Autonomously operating UAVs were featured prominently at the recent Commercial UAV Expo in Las Vegas. These craft take autonomy to the next level, using a technology called SLAM: Simultaneous Localization and Mapping. 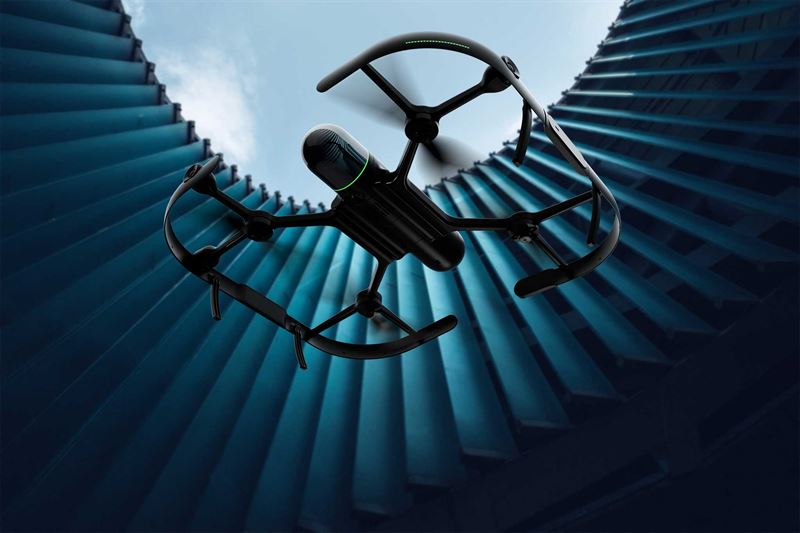 Leica’s BLK2FLY mates the firm’s BLK scanner to a quadcopter to provide scanning from an aerial perspective.

Another example is Emesent’s Hovermap, an autonomous SLAM-based lidar mapper, which features what the firm calls “Autonomy Level 2” (AL2). AL2 enables flights beyond line-of-sight and communication range—even in GPS-denied environments. Introduced at the Expo was the Hovermap-Zoe sensor/UAV platform.

Microdrones and GE Team Up

There were two examples of the entry of major players into the UAV space. Microdrones was on hand to exhibit its new line of General Electric industrial drone line and Terrafugia introduced its Commaris Seeker.

The GE mdLiDAR1000LR features a Velodyne Ultra Puck VLP-32 lidar scanner in the payload, as well as a 26-megapixel CMOS APS-C camera sensor for photogrammetry.

Terrafugia showed off its Commaris Seeker, a fixed-wing eVTOL drone with a 15-foot wingspan, three-hour flight times, and capable of carrying a 10-pound payload, including lidar, 120 MP EO camera, laser methane sensor, or a corona discharge sensor. Now for the big dog part. Commaris is a brand of Terrafugia, a flying car enterprise based in Woburn, Massachusetts. Terrafugia, in turn, is owned by Geely Holding Group, a multinational Chinese firm. While not yet a household name in the U.S., Geely Auto is considered the General Motors of China. Big dog indeed. 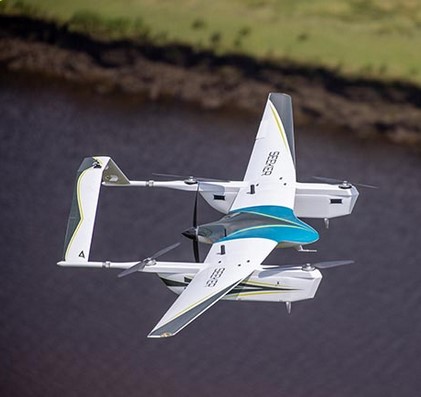 The Commaris Seeker is an eVTOL craft whose long flight times (up to three hours) and large payload (up to 10 pounds) make it well-suited for a wide range of applications.

In her remarks, Lisa Ellman, executive director of the Commercial Drone Alliance, said, “2021 is the year of enabling Beyond Visual Line of Sight (BVLOS).” Many of the technologies described here, especially SLAM-based autonomous operations and sensor fusion are fundamental building blocks of BVLOS. Once BVLOS operations go mainstream, they have the power to unleash applications such as corridor mapping and pipeline inspections where current line-of-sight-only restrictions are a huge impediment to operational efficiency.

Highlights of the unit include a dual axis lidar scanner, three cameras to capture the environment, track 3D movement and colorize point clouds, and remote user operation. Attendees were doubtless surprised when the BLK ARC took a stroll through the exhibit hall.

Sensor fusion continues to evolve and was prominently displayed at the expo. Sensor fusion is generally described as adding two or more sensors, often lidar and electro optical cameras, to provide more robust data collection capabilities to a UAV. Taking it to the next level is adding GNSS for navigation and radar for obstacle avoidance. These last two are critical to BVLOS operations. 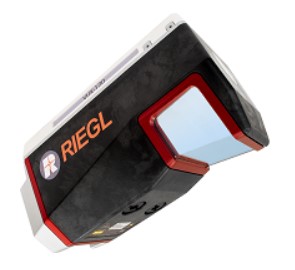 Thge RIEGL VUX-120 is a lidar sensor designed especially for UAVs and light manned aircraft, including gyrocopters and helicopters. To apply the sensor fusion concept users can easily integrate INS/GNSS and up to two external cameras.

An example of a new sensor introduced at the expo that is designed with sensor fusion in mind is RIEGL’s VUX-120—a lightweight and versatile airborne laser scanner. It offers a wide field of view of 100 degrees and an extremely fast data acquisition rate of up to 1.8 MHz. It is well-suited for high point-density corridor mapping applications. While it is available as stand-alone UAV lidar sensor, the unit can be configured with an INS/GNSS system and two external electro optical cameras to meet the end users’ specific applications.

Another example in the sensor field introduced at the expo was Teledyne FLIR’s new FLIR Vue TZ220-T. The unit is a high resolution, thermal zoom gimbal, purpose-built for the DJI V2 Matrice 200 Series and Matrice 300 airframes, which includes radiometry to measure the temperature of every pixel in the scene. Featuring two 640×512 resolution FLIR Boson thermal camera modules, with one providing a narrow-field-of-view (18 degrees) and the other a wide-field-of-view (95 degrees), the Vue TZ20-R provides even greater situational awareness, accuracy, and context by offering more pixels on target with the corresponding temperature data. 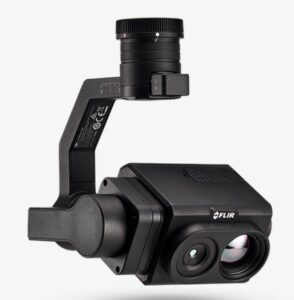 For those unfamiliar with the Commercial UAV Expo Americas, the event is an annual conference that is held in Las Vegas and covers a wide range of commercial UAV subjects. I was unable to attend this year, however, I was there in spirit as I worked with exhibitors and event staff to get the low-down on tech and trends. This year, the event’s seventh, the expo had 130 exhibitors and 1,955 professionals in the commercial drone industry. In addition to the exhibitors’ booths, the expo has a robust conference program that covers subjects like construction, energy and utilities, forestry and agriculture, infrastructure and transportation, mining and aggregates, public safety and emergency services, security, and surveying and mapping. If you are flying UAVs or just interested in them, you’ll undoubtedly find a presentation of interest. Touring the exhibitor’s booths is an education in itself. As a long-time attendee, I’ve found the expo to be the go-to conference for all things UAV.