With UAS, surveyors are becoming aviators. As we adopt new technology, we should heed old advice. 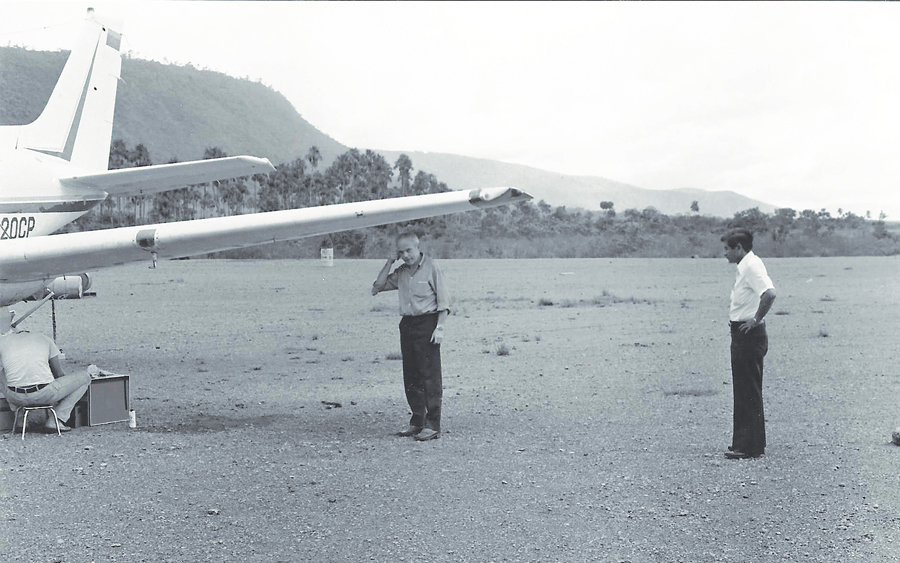 Under the wing stands an early camera operator working with me, and beside him is the pilot who taught me a valuable lesson about aviation and aerial photogrammetry.

I flew my first photogrammetric mission in the early 1980s while I was completing my geodesy degree during tumultuous times at my alma mater. While the rest of the world had disco fever, students at Universidad Central de Venezuela were engaged in a fierce daily battle with the National Guard trying to remain autonomous from federal government rules and supervision; classes were suspended for months at a time.

Because of this I decided to look for a job in my field, landing a position as an apprentice of aerial photography and navigation for cartographic purposes for the largest photogrammetry company in Venezuela. I couldn’t believe my luck.

Over the next four years I flew more than 750 hours of combined navigation and camera-operating missions in a variety of aircraft, such as a modified WWII B-25, a Learjet 25C, a Cessna 310, and a decrepit 1965 Beechcraft Queen Air.

On my first day after my introduction to the crew and to my instructor, the pilot asked me, “What made you decide to get into aviation?”

Surprised, I said, “I applied to a surveying company, and this is the job they had available.”

“Well, never forget that this is, first and foremost, an aviation mission,” he said. “We fly first, and if everything goes well we take photographs, but every time you walk into that plane as a member of the crew you are an aviator.”

Over the course of those four years I learned the trade and its many tricks, shortcuts, and do’s and don’ts, but with every lesson came a reminder of that pilot’s words of wisdom.

Now I find myself in the middle of the unmanned aircraft system (UAS) revolution and the profound changes that these small and miraculous machines are bringing to our profession. 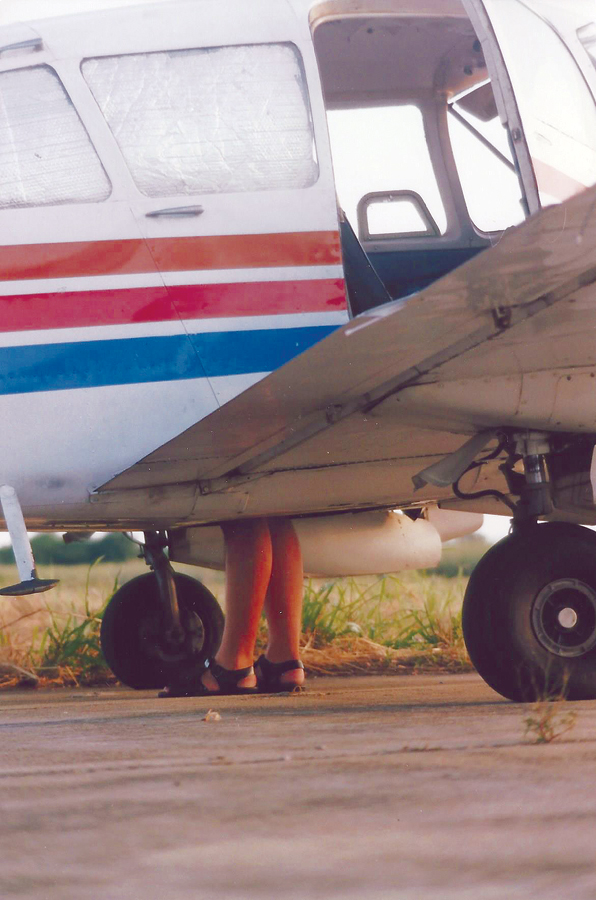 One of the advantages of using non-pressurized aircraft is being able to stand up in those small aircraft once you remove the camera.

When I saw my first UAS for photogrammetry I thought, “Impossible! This flimsy, miniature aircraft will never be able to achieve the required stability to take worthy photographs.”

Take into account that in the old days aerial cameras were behemoths, weighing many tens of pounds, and were equipped with vacuum systems to completely adhere the film to the glass plate to ensure minimal distortion. The glass panel under the camera, separating the inside from the outside in pressurized planes, was calibrated to the micron to make sure we had an exact report of the distortions and their precise location on the glass so we could compensate during the stereo-plotting process.

How can all that be replaced by a five-pound Styrofoam body with a tourist’s camera?

Then I heard a little voice in my head whispering, “You’re turning into an old geezer, rejecting new technology without even trying to understand how it works!”

I took a deep breath, dusted off my old photogrammetry books, and immersed myself in the manuals of UAS, trying to understand how this new generation of photogrammetrists solved the problems of stability, resolution, and distortion.

Before I embark on a dissertation about the merits of manned versus unmanned cartographic flights, let me clarify something: UAS are not replacing existing technologies; they are complementing them. Once we understand this, the question is completely the opposite: How the heck did we do it in the past without UAS?

The first big difference between conventional flights and UAS is the issue of overlapping. In conventional photography that I engaged in you required 60% longitudinal and 30% lateral, and it was almost impossible to achieve more coverage due to the limited number of photographs per roll of film. Increasing overlapping would cause the number of photos to skyrocket, forcing the operator to change rolls every few minutes and making the flight a nightmare for the pilot and the navigator.

With UAS and digital cameras we can have almost any overlap we want or require. A conventional flight with a modern UAS can have 80% on both longitudinal and lateral, making the useful area of each photo really small and concentrated in the center of the image where distortion is almost negligible.

Another huge difference is the fact that UAS fly at a constant speed and therefore must execute the mission with side winds in order to maintain the overlapping constant. In the old days, we flew the missions according to flight lines placed on a paper map by a person in an office, and the pilot adjusted the speed of the aircraft to account for winds. It was a manual process and required a lot of coordination between navigator, camera operator, and pilot. 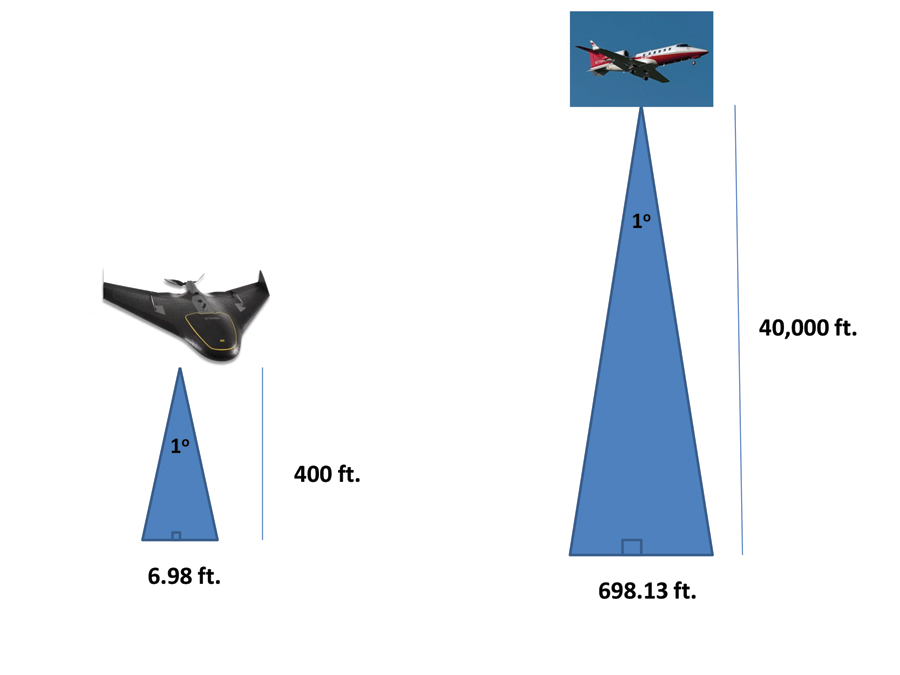 Error on the ground as a result of 1° of movement, lateral or
longitudinal, due to instability in the flight path.

Nowadays UAS missions are planned on the ground just before takeoff, and the winds are accounted for in the design of the flight lines. It’s a more comprehensive process and allows the operator of the aircraft to be mission planner, navigator, camera operator, and remote pilot all at once in a single, neat, human package.

Most UAS used in commercial cartography today were not designed to fly at high altitudes, which saves a lot of problems. The higher you fly, the higher the error in the photograph due to natural distortions of the equipment and instability in the flight path.

It is common sense to assume that a five-pound Styrofoam plane driven by a single, two-blade electric propeller would be more unstable than a 10-ton plane powered by two internal combustion or jet engines. This assumption explains why the distortion associated with lack of appropriate overlap from the flight path instability can be almost eliminated by flying low over the ground (Figure 1).

Another huge difference between conventional flying and UAS is time in flight (TIF). Most commercially available photogrammetric UAS on the market today are powered by electric batteries. This technology, unfortunately, has not caught up with the rest of the equipment on board so it disproportionately contributes to the weight of the airplane and lasts for only 50 minutes or so in the best of cases.

This makes for an ideal platform in the case of small to medium/large areas that can be covered in a few missions and impractical when trying to map hundreds or thousands of acres of surface.

The deployment of real-time kinematic (RTK) and post-processing kinematic (PPK) in the most recent versions of modern UAS has added an extra layer of savings by eliminating the need for ground control points (GCP).

We Could Have Used a UAS

Now let me give you a real-life example of the conventional methods used completely in the wrong way and how it compares to UAS today. 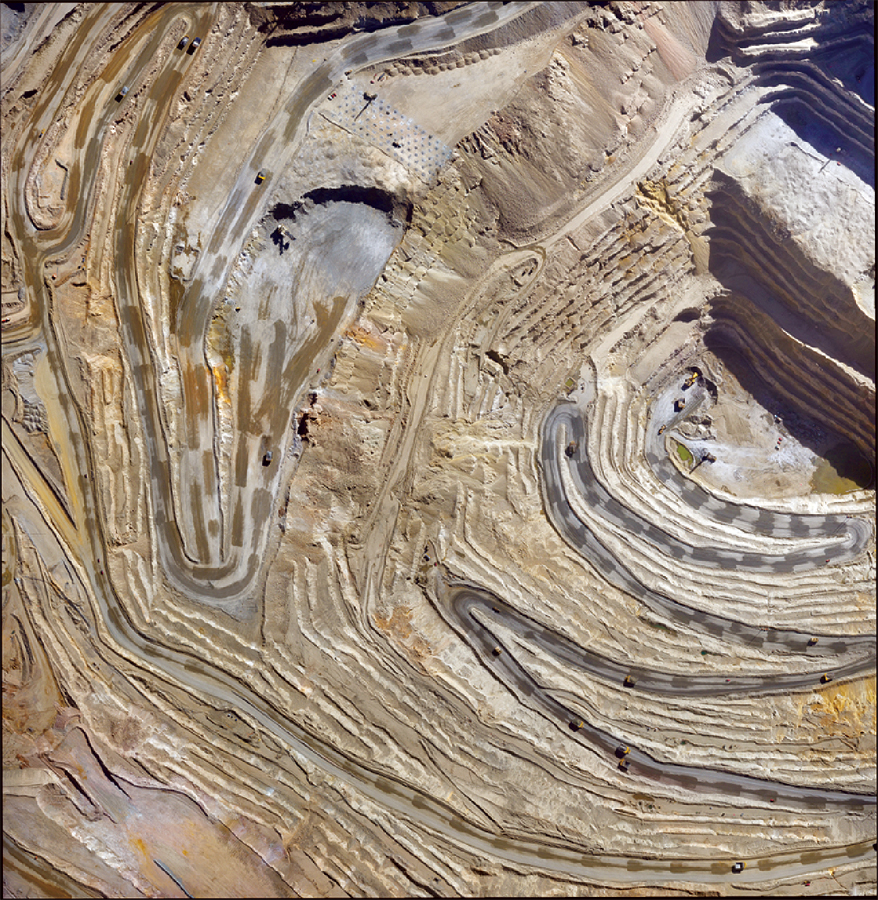 An orthophotograph of an open pit mine taken with a modern UAV.

In 1985, Venezuela was mining large quantities of Bauxite to be treated by the gargantuan processing plant on the banks of the Caroni River in the southern part of the country. The open pit mine was located approximately 50 miles upriver, and the ore was sent in barges downstream, a very efficient process for a then-profitable operation.

The barge company that had the contract to transport the ore downstream was paid by ton of material carried by its barges to the processing plant. Unfortunately, the reports of the number of tons of ore mined and the number of tons barged out of the mine site never matched, and the owners suspected corruption between the pilots of the barges and the personnel managing the weigh stations at the exit of the mines.

The company I worked for was hired to do monthly flights of the mine site to calculate volume changes and determine how much was extracted in a specific length of time. The barging company would be paid according to these calculations and no longer according to weight.

The mission sounded rather simple, but the only aircraft available to do the first mission was the Learjet 25C. So picture this in 1984 dollars:

The mission was planned at an AGL altitude of 1,500 feet and at a speed slow enough to allow for good overlapping in order to increase accuracy. For a Lear 25C to fly low and slow is not ideal and against almost all safety recommendations.

The deliverable would be a piece of Mylar with contour lines every 50 cm (about 1.6 ft.), which would be compared with future flights for volume calculations.

The total price of the mission was well in excess of $50,000, not including the stereo plotting charges and the time of delivery, which was about two weeks. Just in time to be planning the next mission.

Compare this with today’s reality:

For all of the above reasons, UAS are here to stay, not to replace the entire spectrum of cartographic flying but to increase safety and efficiency in certain applications that would be unthinkably expensive and risky using conventional photography.

There’s one challenge that remains a concern given the rapid deployment of these new technologies and the frenzied adoption pace by the mapping community: the fact that these activities are first and foremost flying missions. Also, we are capturing aerial data with UAS and not with total stations and GNSS receivers.

By turning surveyors into aviators, we as an industry need to make sure everyone understands, without a shred of a doubt, that once we launch that aircraft into the sky we are aviators, not surveyors. This must be kept in mind at all times: flying machines eventually come down to Earth. It is our responsibility as pilots in command to make sure this landing is accomplished safely and uneventfully.

The words of that first pilot in my flying career resound ever so true today: “Never forget that this is first and foremost an aviation mission. We fly first, and, if everything goes well, we take photographs, but every time you walk into that plane as a member of the crew, you are an aviator.”

The fact that we are no longer walking into a plane doesn’t exempt us from responsibility to the people on the ground.

Every operator of a UAS today should have his or her own version of this credo. At the end of the day when we use a UAS we are transitioning from surveyors into pilots, and that change brings with it great advantages but also great responsibilities.