Manfred Burchroithner grew up in the Austrian Alps not far from Eisriesenwelt, a stunning 26-mile long ice cave that is the largest in the world. Southeast of the City of Salzburg, the skiing was pretty stunning where he grew up as well.

Burchroithner recalls a rock outcropping that in winter stuck out a few feet above the largest Dachstein glacier where he and his friends used to ski as kids in the 1960s. Today that rock outcropping rises some 35 meters above the surface of the glacier.

Half a century from those carefree skiing days, after years of education around the world in geology, paleontology, cartography and remote sensing, Burchroithner found himself back home making a decade-long study of the massive ice of Eisriesenwelt. He wondered what the warmer temperatures in the Alps that were causing Austrian glaciers to melt meant for his country’s famous ice caves, which are a huge tourist attraction and vital to the local economy and every summer season visited by hundreds of thousands of tourists from around the world.

Burchroithner, now a retired professor of cartography at the Dresden University of Technology in Germany and former director of the Institute for Cartography, used to take groups of students to the ice cave to show them that glaciers are not just on the earth’s surface, and like surface glaciers, the ice of subterranean glaciers is also slowly changing.

During his visits, Burchroithner got to know people in the local tourism industry whose livelihood depends on the ice cave. About 200,000 people annually visit Eisriesenwelt and 180,000 visit the nearby Dachstein Ice Cave.

He started by asking the local tourism officials if he could make some detailed hand-drawn maps during his trips to the cave. “I eventually had a series of pretty weird and pretty diverse cartographic sketches of a small part of the ice cave,” he says. “I did this a couple of times and then I said, why not launch a real laser scan campaign of a week or so for highly accurate mapping?”

The tourism folks agreed and in 2010 one of his former students, then working for Faro Technologies, Inc., helped him get the equipment he needed to measure the surface of the ice. He and eight of his students spent a week measuring the ice. 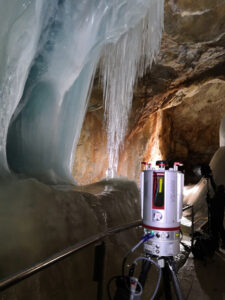 A Riegl scanner in the Eisriesenwelt ice cave in Austria.

Local tourism officials were impressed and saw the value of the measurements. Wondering if warmer surface temperatures were causing the ice in the cave to slowly melt, they asked Burchroithner to repeat the study a few years later. If global temperatures were rising and the ice in the cave was shrinking, they wanted to know how much time the tourism industry had before the ice mass would disintegrate to the point where tourists would no longer be interested in coming to Eisriesenwelt.

“This is a really big thing money-wise [for the local economy],” Burchroithner said. “So we did it three years later. It turned out there was basically no change.”

But the methodology only determined the size of the surface of the ice. As technology advanced, Burchroithner and local officials wanted to know the total mass of the ice.

In 2016, Burchroithner took advantage of newer technology. Using ground penetrating radar, the team was able to extrapolate a total amount of ice.

This time he used the Riegl VZ-400i, a cutting-edge 3D laser scanning system that combines innovative processing architecture and Internet connectivity with Riegl’s latest waveform processing lidar technology. He took scans from approximately 350 positions on the visitor walkway through the cave. The scanner (206 mm in diameter, 308 mm high and weighing just 9.7 kg) uses a laser source in the near infrared wavelength, meaning data acquisition could be done in absolute darkness.

In a white paper written with Thomas Gaisecker of Riegl, the two explain:

Each data set was scanned with a spatial sampling resolution of 9 mm at 10 m distance (equaling 0.05° resolution in azimuth and elevation). The acquisition of the lidar data of a full 360-degree scan takes 30 seconds. Every 10 m such a full 360-degree scan was taken on the visitor walkway. Each scan contains approximately 15 million measurements, which result in a point cloud of around 5 billion measurements for each campaign.

Automatic on-board registration aligned each newly acquired scan position with respect to all previously acquired data. Thus, the registration did not require any user interaction as long as the data of the newly acquired scan position overlapped sufficiently. At the end of each measurement campaign, i.e. after approximately 15 hours inside the cave, all data were already registered within the correct coordinate system.

“Scanning this ice cave shows on the one side the high performance of our equipment,” says Gaisecker. “Fast and accurate 3D measurements even under these harsh conditions inside a cave without light and scanning on ice, which is really not the perfect surface for a laser-scanner.”

The data was processed using Riegl’s RiScan Pro, which seamlessly stitches together the scans for easy visual inspection and differentiates between the ice mass and the rock of the cave based on the intensity of the recorded reflectance signal. The first scans in 2017 generated a highly accurate
three-dimensional dataset of Eisriesenwelt compared to Buchroithner’s earlier surface scans. The scans were repeated in 2019 and 2020 were then compared to 2017.

Using voxel comparison, a tool of the Riegl software, Burchroithner and Gaisecker wrote in their paper:

In a first step we automatically extracted voxels of equal size from the reference dataset (2017). For this we used a voxel size of 25 cm. The scan data within each voxel were analyzed and subsequently a principle component analysis delivered an estimated plane with a normal vector for every voxel …

… In a next step voxels of the same size were extracted from the comparison datasets (2019, 2020). Every voxel of these datasets finally got a new data attribute named “distance to surface” which shows the distance along the normal vector of the reference data set to the closest voxel of the reference data set. This attribute can be interpreted as increase or decrease of the ice thickness within every voxel…This method allowed a real three-dimensional data comparison with just a few mouse clicks. Prior to our study, there were only a few points within the cave measured by ice stakes, showing the decrease respective increase of the ice cover at these individual points. (Schöner et al., 2011)

“The described voxel-analysis-tools allow an extremely fast and easy workflow for 3D data comparison to get an accurate calculation of ice growth and ice decrease,” says Riegl’s Gaisecker.

Conflating all those numbers, Burchroithner says the scans between April 2017 and April 2020 “yielded an ice increase of 59 cubic meters.”

So, interpolating all that, Burchroithner and Gaisecker say the data show that climate in Austria is becoming warmer. Although it may seem counter-intuitive to say more ice means warmer temperatures, that’s an inaccurate interpretation.

“Of course this is an indicator for climate change,” says Gaisecker. “Ice growing inside such a cave is an indicator for global warming. Due to higher average temperatures on the surface more water penetrates the rock face into the cave. Inside the cave (where the temperature stays below freezing for most of the year) this water results in ice growing, because the cave has the whole year a stable climate with almost the same temperature.”

Burchroithner adds: “The big finding was actually that even now with warmer winters and hotter summers, the amount of ice is plus or minus stable,” says Burchroithner. “This is due to the fact that in late winter early spring bigger amounts of mountain water drain down from the surface of the Karst Plateau, about 1,000 meters above the cave.

“This higher amount of melt water meets the still comparatively cold air in the cave. So despite the increased melting during the summer period, at the end of the winter period we have an increased growth of the ice.”

That’s the situation at the current time.

“I must, however, say that if we still have further increase in global warming, I’m still believing the ice inside Eisriesenwelt will decrease,” Burchroithner says. “But for the time being the ice caves are safe.”

The conclusion of their paper explains it this way:

The most recent lidar surveying campaign in the Eisriesenwelt end of April 2020 resulted in a total ice surface of roughly 10,100 m². Compared to 2017, an area of 2660 m² remained more or less constant, i.e. the average ice thickness changed by less than 3 cm. Approximately 3860 m² showed an ice decrease of up to 30 cm (locally even more), whereas for about 3500 m² an increase of the same amount was measured.

The comparison of the overall mass balance of the Eisriesenwelt between the two survey campaigns (April 2017 and April 2020) yielded an ice increase of 59 m³ (Fig. 9). This has to be seen in relation to the total ice mass calculated by Kaidong (2018) based on ground-penetrating radar measurements taken in April 2017, i.e. approximately 63,300 m³.

The flat area of the cave between Niflheim and Mörkdom shows minor ice changes with smaller maximum decreases and increases (Fig. 8, 9). We assume that the reason is the flat topography with just a few small water inflows. The mass balance of this flat area yielded an ice decrease of 21 m³. The rearmost ice-filled part of the cave, Eispalast, is also a flat area, but interestingly it shows a strong ice growth of 88 m³ (Fig. 8, 9).

The first half of the show (portion of the) cave including Posselthalle, Großer Eiswall and Hymirburg shows a highly pronounced relief. From the entrance to Hymirburg the terrain is continuously ascending. At Hymirburg, just before the terrain turns flat, the maximum water inflow occurs and is responsible for almost the whole ice growth within this steep southern half of Eisriesenwelt. Hymirburg and the upper part of Großer Eiswall show a total of 64 m³ ice growth (Fig. 8). The ice increase in this area is a delayed gravity-driven reaction and is also responsible for the very local ice growth areas in the lowest part of the cave, the Posselthalle, which is close to the cave entrance. Overall, however, the Posselthalle is dominated by ice decrease. Only the already mentioned gravitational influence from ice growth in the more northern, higher areas (Großer Eiswall and Hymirburg) supports the overall mass balance in this lower part of the cave.

To sum up, the ice volume in Eisriesenwelt has increased slightly even in recent years of increased global warming. Future LIDAR surveys will show whether this is a multi-annual trend, providing important highly resolved data for a better understanding of the long-term ice mass balance in this cave.