INTERGEO is billed as the biggest specialist event in geodesy, geoinformation, and land management. From a logistical standpoint, that claim is certainly hard to dispute. It’s held in the world’s largest convention center, the Deutsche Messe exhibition complex in Hannover, Germany. The Messe is spread over nearly 250 acres, with futuristic-looking buildings.

The Messe exhibition grounds resembles Tomorrowland at Disneyland, if Tomorrowland covered all of Disneyland—and if Disneyland itself were 50% larger. INTERGEO is held in only a portion of the Messe, but it attracts more attendees (16,000 this year) than the ESRI User Conference in San Diego. In content, it’s similar to the ACSM conferences of yesteryear, only ten-times larger.

What makes INTERGEO truly unique, at least from this surveyor’s perspective, is that there’s no wall between the GIS and surveying communities like at conferences such as ESRI. INTERGEO is all about the complete spectrum of geoinformation, starting from its collection to its management and analysis use. The dominant discipline is surveying, because the rest of the world (aside from the United States) seems to get it that surveyors are the professionals best suited to measure, model, and manage geospatial phenomena.

Geotechnology of All Sorts 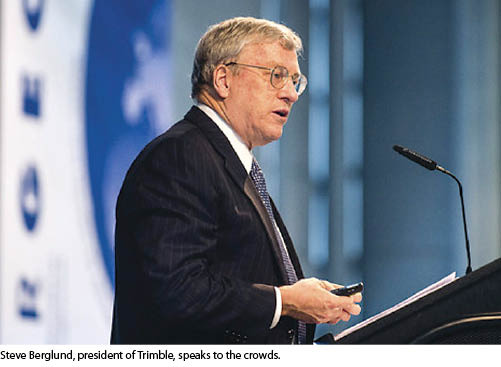 The 500+ exhibitors fell primarily into one of four major categories: terrestrial surveying instrumentation such as robotic total stations and GNSS; aerial imaging sensors like Microsoft’s UltraCam technology; unmanned aerial vehicles and their use as aerial imaging platforms (fixed-wing and rotorcraft platforms, with the latter type predominant); and visualization/analysis software of all kinds, with augmented reality systems a big draw at many booths.

Trimble was the winner of the Most New Stuff announced at INTERGEO, including: 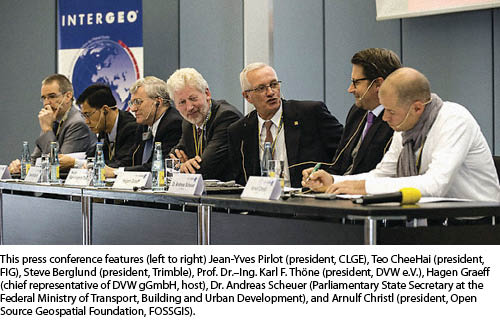 Other vendor announcements at INTERGEO included: 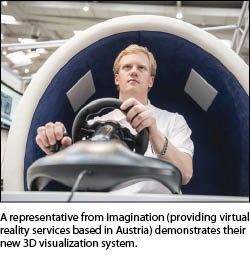 Significantly, Microsoft was a first-time exhibitor at INTERGEO, showing its new UltraCam Falcon photogrammetric digital aerial camera system, along with an updated version of its UltraMap photogrammetric workflow software. But many of the discussions I overheard in their booth were about licensing agreements for commercial use of their recently completed Global Ortho program: all of the USA and 14 European countries covered by seamless 30-cm Ground Sample Distance (GSD) color-, 60-cm GSD false-color infrared ortho-mosaics, and a 1-meter GSD digital surface model. This product will bring a new level of large-scale photogrammetric analysis capabilities for all types of applications.

So … lots of cool technology. But, as the title of this review says, the big story was about how effectively geodata is being collected in European countries and turned into geoinformation (what we call GIS in this country). The punch line: In European countries, as well as many others across the world, this end-to-end process is under the supervision of surveyors. I had stepped into an alternate universe where surveying is not only a respected and desirable career profession but also the profession that creates and manages governmental GISs. A lot of this stems from the fact that European professional surveyors are university-educated and undergo extensive apprenticeship certification. A more fundamental reason is the degree of respect that geoinformation has there for its application at all levels of government.

A Confluence of GeoProfessionals

Concurrent with INTERGEO were three other “mini conferences”:

The first national INSPIRE conference. INSPIRE (the Infrastructure for Spatial Information in Europe) is the European equivalent of the United States’ National Spatial Data Infrastructure (NSDI) program, with two important differences: 1) INSPIRE has achieved real-world results, and 2) has involved surveying professionals in key organizational and decision-making capacities. A Spatial Data Infrastructure is basically a giant GIS for an entire country, theoretically eliminating redundant mapping efforts and providing geodata standardization guidelines. INSPIRE has standardized issues of costs, licenses, and open data in 27 member countries, abiding by the PSI guideline (‘Re-use of Public Sector Information’). In contrast, the U.S. NSDI has been “in development” since the 1990s, with very little real progress to show for it.

The SAT NAV Forum, sponsored by the German Federal Ministry of Transport, Building and Urban Development and the Federal Association for Information, Technology, Telecommunications and New Media. This event explores synergies between navigation, IT, and geoinformation.

The conference of the Council of European Geodetic Surveyors (CLGE), bringing together surveyors from 36 member countries. This was the first time that the CLGE was held in conjunction with INTERGEO.

What is significant in the convergence of all of these acronyms is the perspective in which GIS is approached in Europe and other like-minded countries. The best way I can describe it is with how automobile technology was viewed in its early days. In the 1910s and 1920s, the Society of Automotive Engineers published pamphlets with titles like, “Adapting the Motor Car for Use as a Milk Delivery Vehicle,” “Design of Military Truck Axles,” and so forth. At that time, the necessity was how to customize the mechanism of self-propelled vehicles for every conceivable use. Over time, of course, standards were developed that enabled the automobile to function for a variety of applications.
To an extent in this country, we’re still in the 1920s as far as GIS is used. At the Esri User Conference, for example, there were 40+ tracks of GIS use, from archaeology to zoology. And I’d be willing to bet that discussion of custom-fit geopositioning standards was a wheel being reinvented in a lot of them. This was all happening, of course, while the surveyors were sequestered offsite at the Survey Summit. But I digress.

The point is that conferences like INTERGEO focus on standards that can be applied across the spectrum of geotechnology applications. And the professionals involved at all levels of those discussions, from techniques to political implications, are surveyors, because authoritative measurement is their—our— bag. From my perspective, that’s a big deal, and the real story to be taken away from INTERGEO.

The countryside surrounding the Messe complex is beautiful with numerous parks and open fields. Hannover itself is ultra-modern, owing primarily to its reconstruction after near-total obliteration in the Second World War. It is a perfect setting for INTERGEO’s 21st-century approaches to geoinformation development and its democratized use.