Lidar, Helicopters, and the FAA

A search for recently reported case law involving the terms “FAA,” “aerial survey,” and “lidar systems” revealed a lawsuit that was decided by the United States District Court in Colorado on May 31, 2012 (see Leica Geosystems, Inc., v. L.W.S. Leasing, Inc., et al. [2012 U.S. Dist. LEXIS 75174]).  Although the case involved a contractual dispute between the manufacturer of an airborne laser sensing system and a company that specializes in cross-country utility routing for the survey sector, the court’s description of the Federal Aviation Administration (FAA) airworthiness approval process is relevant to the aerial mapping industry. 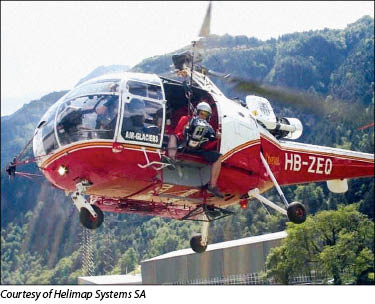 The contract in dispute involved the sale of a Class 4 laser lidar system for use in a helicopter.  The following article addresses the manner in which the federal aviation regulations affect the modification of a helicopter for lidar operations, as well as the unpredictable nature of interactions with the FAA concerning airworthiness issues.

Under FAA regulations, any structural modification to an aircraft—such as the installation on a helicopter of a pod or a skid mounting device—must be approved by one of the FAA field offices (a pod is an exterior casing that alters the structure of the helicopter and houses the lidar system; a skid is a device placed on the side of a helicopter that commercial companies use to mount lidar systems).

A separate airworthiness approval is also required for installation of the lidar system onto the helicopter pod or skid.  In order to receive FAA approval, a party can either secure a Supplemental Type Certificate (STC) or may execute a “field approval” through the issuance of a form 337.

An STC is required for any “major design change” to an aircraft: i.e., one that has an appreciable effect on an aircraft’s weight, balance, structural strength, reliability, operational characteristics, or other characteristics affecting airworthiness (see 14 C.F.R. §21.93).  The process of obtaining an STC may take from six months to three years, depending on complexity, and could cost between $50,000 and $200,000.  Only a designated FAA Aircraft Certification Office may issue an STC.

Under some circumstances and in the absence of an STC, installation of a lidar mounting system on an aircraft may be considered a minor design change. As such, the installation and modification may be “field approved” by the FAA through a local Flight Standards District Office. In order to obtain FAA field approval, a repair station must first complete the modification work and then file an FAA form 337 with the local FAA field office. The form 337 must be completed by a designated engineering representative.

The designated engineering representative works as a liaison between the FAA and the aircraft repair station in order to ensure that the modifications are performed in accordance with the regulations.  Because the FAA field approval process requires that a repair station complete the modification to an aircraft before filing a form 337, the procedure entails a significant risk to the aircraft owner or operator.  As a result, it is standard practice for an aircraft repair station to seek verbal approval from the FAA that a particular form 337 will be accepted before performing any modifications.

The reported case involved an attempted installation of a Class 4 laser lidar system in an FAA approved pod for use on a Eurocopter AS350B2 helicopter.  The repair station manager sought FAA authorization to install the lidar system by means of an FAA form 337 for a field approval.  Prior to submitting the form 337 for approval, the repair station manager first sought verbal approval from an FAA aviation safety inspector.

After reviewing the system and its intended use, the FAA inspector told the repair station manager that he would not grant a field approval

for installation and use of a lidar system on the helicopter.  The FAA’s reluctance to issue field approval related to a September 2006 Special Airworthiness Bulletin (SW-06-68) that placed a temporary hold on field approvals for all Class 3b and Class 4 airborne laser installations.

The Court ultimately found that, even though the pod had an STC for FAA approved installation, it was incumbent upon the aircraft operator to apply for FAA field approval concerning installation of the lidar system.  Although Special Airworthiness Bulletin SW-06-68 was issued for the express purpose of alerting aircraft owners and operators of the potential hazards of installing forward-looking infrared (FLIR) systems with embedded laser capability on rotorcraft, the FAA has taken the position that no field approvals for installation of Class 3b or 4 laser lidar systems will be issued until the agency develops a policy for installation of laser systems on rotorcraft.

To date (January 2013), the FAA has not developed a policy or otherwise established the required certification procedures for installation of laser systems on rotorcraft.

Disclaimer – Not Legal Advice – No Attorney-Client Relationship Formed by This Article or By Any Comments in This Article.

The information in this article is provided for general informational purposes only and is not intended to be legal advice.  The law changes frequently and varies from jurisdiction to jurisdiction.  Being general in nature, the information and materials provided may not apply to any specific factual and/or legal set of circumstances.  No attorney-client relationship is formed nor should any such relationship be implied.  Nothing in this article is intended to substitute for the advice of an attorney.  If you require legal advice, please consult with a competent attorney licensed to practice in your jurisdiction.