North Carolina raises the bar for orthoimage accuracy in a statewide project.

Aerial mapping companies Spatial Data Consultants (SDC) and Midwest Aerial Photography each have vast experience in airborne image acquisition in support of surveying, engineering, and GIS mapping initiatives varying in scope and size. But neither firm had been involved in an image-quality validation process as thorough as the one designed for the North Carolina Coastal Orthoimagery Project that began in early 2012. 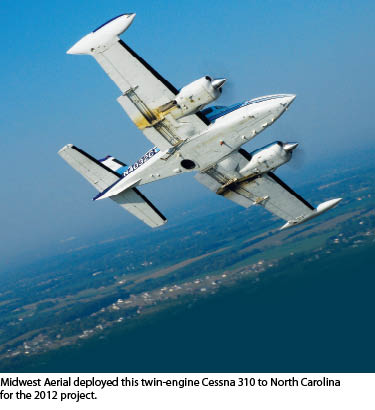 Midwest Aerial’s president Ken Scruggs agrees: “The demanding quality control process developed by the NC project team may set new standards for other agencies to follow and will pay off for the state’s citizens by delivering extremely consistent and accurate map products.”

Funded by the North Carolina 911 Board, the project seeks to provide true-color orthoimagery at six-inch resolution for one quarter of the state annually on a four-year project cycle. The orthoimagery will primarily serve as a base map layer for the statewide emergency 911 system; however, it will also be used as a GIS component by other state, federal, county, and municipal agencies as well as private engineering and surveying firms, and the general public.

“In accordance with state law, we will make the imagery from this project available for free to anyone,” including commercial entities, said Tim Johnson, CGIA director, adding that the state has already established an online distribution site called the NC OneMap Geospatial Portal.

Based in High Point, North Carolina, SDC is a geospatial services firm that has served as a prime vendor on mapping projects for many agencies in its home state. When the request for qualifications was released for the Coastal Orthoimagery Project, which would be awarded to multiple vendor teams under qualifications-based criteria, SDC asked Midwest Aerial to be the member on its proposed project team for digital airborne imagery acquisition.

“We were well aware of the demanding specifications for this project and selected Midwest Aerial because of their commitment and investment in leading-edge technology, the Z/I Imaging DMC II-140 digital airborne acquisition system,” said Schall.

According to Midwest Aerial’s Ken Scruggs, who owns three DMC II-140 models, the camera has a combination of geometry, optics, and forward-motion compensation that enables it to acquire images with unrivaled geometric and radiometric accuracy and sharpness.

“We were confident that under normal operations we would satisfy the standards set by the NC project team in terms of quality, efficiency and timeliness,” said Scruggs.

For the 2012 portion of the project, SDC-MAP won the contract to map a four-county area totaling approximately 3,000 square miles in southeast North Carolina, including the complex airspace above the Camp Lejeune military base. 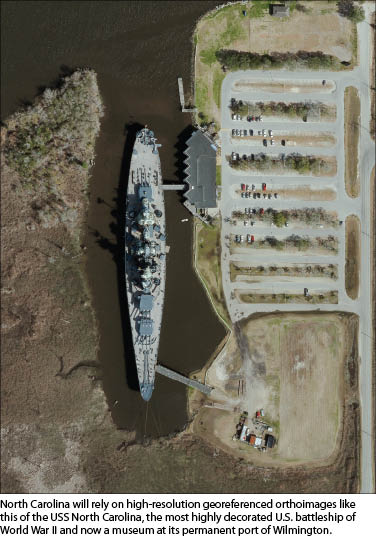 The validation range is comprised of 16 modular orthoimage tiles, each 5,000’ x  5,000’ based upon NC state plane coordinates. Four geodetic control stations located in each corner of the validation range and their corresponding coordinates were provided by NCGS.  They were used as control in support of the airborne GPS and IMU data collected during the digital airborne imagery acquisition process for aero-triangulation (AT) processing.

“Not revealed to us,” said Schall, “were precise coordinates for 28 other identifiable control points, some measured during the AT process and some not, within the validation range.” Coordinates derived from the final AT solution for these withheld points would be checked by NCGS against actual surveyed coordinates to validate the accuracy of the airborne GPS, IMU, and AT data.

In January 2012, Midwest Aerial deployed two of its airborne DMC II-140 acquisition systems to the validation range. To achieve the desired six-inch resolution, the firm flew at an altitude of approximately 6,300 feet, which was about 1,500 feet higher than other teams using the first generation DMC. In both test flights, the Ohio firm operated its DMC II sensors and GPS/IMU systems just as they would for any other acquisition project.

Upon completing the flights, Midwest Aerial ran the raw image data through a post-processing procedure in Intergraph software developed for the sensor. It performs the radiometric pan-sharpening and adjusts for atmospheric conditions such as haze, and it balances the variable sunlight intensity across each image frame. The image data was then delivered along with GPS/IMU data to SDC for AT and orthoimage processing.

After quality control analysis, which mimicked the quality control procedures for the pending project, Midwest Aerial’s sensors, aircraft, and GPS/IMU systems were cleared for the project. These components would have to remain integrated for all flights. “An aerial acquisition system must pass the validation range procedure to qualify for North Carolina state-funded mapping projects,” said Schall. Flight operations began a month later in early February 2012.

As a licensed land surveyor in North Carolina, Schall knew the ground control work would be a critical component in achieving overall mapping accuracy because coordinates for photo-identifiable points on the ground are used in both the AT and horizontal accuracy quality control procedures. He devised a ground control survey strategy that would ensure accuracy. 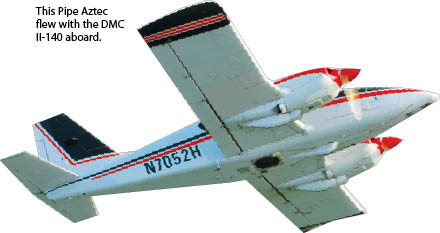 “Control points established for the 2010 statewide orthoimagery initiative, provided by NCGS, would add integrity to the project and optimize costs by reusing those points,” said Schall. “So, our first objective was to recover these existing points and plan our supplementary points to complement them.”

There were 32 existing control points in the four-county SDC project area for 2012 that were recovered and reused. Next, SDC selected five NGS or NCGS first-order geodetic survey monuments in each county that had been used in multiple high-accuracy mapping projects in recent years. Finally, SDC established approximately 15 new survey points in each county, bringing the total to 28 control points per county. All control points were surveyed with GPS equipment using the NCGS Real Time Network to an accuracy of +/- 7.5 cm horizontally and vertically.

For digital airborne acquisition, Midwest Aerial deployed the two validated systems simultaneously. Scruggs reasoned that acquiring as much imagery as possible under identical ground and atmospheric conditions would result in more consistent exploitation imagery and resulting orthoimagery once all the images were post processed, orthorectified, and mosaicked.

“Each aircraft had multiple flight plans to choose from on any given day, depending on the weather,” said Scruggs. “But in general, we tried to start the two acquisition systems in the same area at the same time and then work away from each other. This maximized flight safety while ensuring acquisition conditions on the ground and in the air were generally equal.”

As it had in the validation procedure, Midwest Aerial post-processed and validated the raw DMC II-140 imagery and airborne GPS and IMU data before sending all to SDC in High Point for AT and orthoimagery processing. Using the combination of new and existing ground control points, SDC measured and processed AT solutions for four separate AT blocks within their assigned project area using the Intergraph software. Reports generated by the software documented the statistical results for each AT solution. These reports were delivered to CGIA and NCDOT for evaluation of accuracy and compliance with the state standards.

“The AT processing and statistical analysis confirms the airborne GPS/IMU, ground control, and geometry of the exploitation imagery are valid,” said Schall.

This was the second phase of validation process, explained Schall, and no firm was cleared to move forward with orthoimage processing until the AT results were reported and analyzed by CGIA, NCDOT, and NCGS. Ultimately, all +/-10,000 exploitation images acquired by Midwest Aerial and corresponding AT processing by SDC were accepted for production.

Once the NC project team accepted the exploitation imagery and AT, SDC moved forward with orthorectification using the surface models from the earlier lidar project. SDC generated color-balanced, seamless color (RGB), orthoimage mosaic tiles across their assigned project study area at six-inch pixel resolution and delivered them to CGIA for final quality control, which included four independent levels of analysis and inspection. “This is another area where North Carolina really sets itself apart,” said Scruggs. 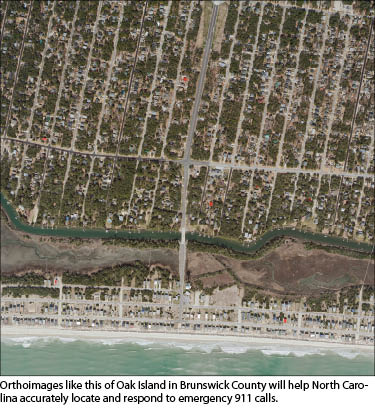 The NC project team set up a secure website that was accessible only to 911 Public Safety Answering Points (PSAPs), state and county GIS agencies, and other end users who would ultimately have access to the final orthoimagery and metadata. Through the secure website, the four levels of analysis and inspection were conducted simultaneously. These geospatial professionals examined the orthoimagery within their corresponding study area for issues of non- compliance to state standards. For the most part, reviewers were looking for feature distortion caused by inaccurate lidar data (such as misaligned roads or warped structures), issues of radiometric inconsistency at seam line locations, or other image artifacts or anomalies.

“Contractors have to respond to each flagged issue and resolve valid defects,” said Schall. “There was only a single issue of radiometric inconsistency flagged within our study area, which was located at the boundary between ours and another vendor’s study area.”

The final level of quality control will include horizontal accuracy analysis conducted by NCGS comparing accurate survey coordinates for withheld photo-identifiable quality control check points within the assigned project study area to their actual physical location in the final orthoimagery.

Accuracy will be assessed and reported to CGIA by NCGS using SIS Accuracy Analyst software. Horizontal accuracy for the project was designed to meet ASPRS Class I horizontal accuracies at a design scale of 1:2,400 (1’= 200’) where the limiting RMSE in either X or Y is not greater than 2.0’.

“The airborne acquisition data from the DMC II-140 system and the resulting AT solution achieved would easily meet this standard,” said Schall.

Once all four levels of quality control for the final orthoimagery are complete and the results are accepted, Schall will submit a final orthoimagery project report certifying the accuracy. This will be reviewed for acceptance by the NC project team.

In total, the validation process for the 2012 orthoimagery took almost ten months. Future phases of the mapping program will be evaluated in an identical fashion with the exception of camera system validation, which will not be required for previously approved airborne acquisition sensor systems.

“North Carolina has been demanding of its acquisition and mapping vendors, but this multi-level system of validation ensures the state has top-quality orthoimagery suitable for the broadest possible range of applications,” said Scruggs.