In the past three years since I’ve worked for the National Forests in Florida, many mapping exercises have been cumbersome and have involved duplication of effort because results were not often shared or combined with other disciplines.  This flagship project in Silver Glen Springs is different.

The mission of the Forest Service Land Surveying and Boundary Management Program is to provide visible and legally defensible property lines through accurate and reliable land surveys supporting public ownership of the federally managed estate.

Silver Glen Springs Located within the boundaries of the Ocala National Forest, Silver Glen Springs is one of the most significant recreational sites managed by the National Forests in Florida, drawing 35,000 visitors per year. Acquired in 1990, it became the responsibility of the Forest Service to protect its natural and cultural resources. The National Environmental Policy Act requires a comprehensive approach to developing management plans for significant sites such as Silver Glen.

The first step in developing a plan of action to protect the area was to create a baseline map. The focus of the mapping project was to locate buildings, septic tanks, parking lots, and any safety hazards. The removal of safety hazards had to avoid damaging any sensitive natural or cultural resources, and mapping was a vital tool in achieving that goal. Only a small amount of mapping was completed by Forest Service employees because decisions about future development had not been made. 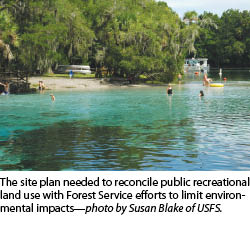 In the early 1990s, a partnership between the Forest Service and Florida State University gathered initial information about cultural resources, while, as a separate project, a nonprofit organization mapped the underwater spring cave system.  A few years later, Forest Service biologists and hydrologists worked with the Florida Department of Environmental Protection to study the effects of historic dredging in a channel and the effects of modern boat access.  By the end of the 1990s, there was some topography, cultural data, cave mapping, and bathymetry completed, but that’s about where it stopped.

Fast forward to the late 2000s. The public demand to use the site for recreational swimming and boating had significantly increased, and Forest Service efforts to limit recreational impacts such as erosion, compaction, and water pollution came to a head. It was time to reevaluate the situation and develop a plan that provided reasonable recreational opportunities without compromising the qualities that make Silver Glen Springs a special place.

The Forest Service explored alternatives that included designs to provide access to boaters from the land to the water and limit erosion damage in the swim area. We also needed improved parking and restroom facilities to accommodate visitors. Ideally, management plans would lessen the impact to cultural resources at the site while accommodating recreation.

“We also needed to be aware of subterranean voids such as caves in relation to features on the surface such as parking lots and buildings,” said Steve Schnetzler, Forest Service engineer.

To carry out this plan, a thorough topographic survey was needed.  Forest Service engineers determined the scope of the survey that was eventually contracted for the site.  At the same time, the University of Florida was conducting an archaeological study on private land across from Silver Glen Springs run.  Forest Service archaeologist Rhonda Kimbrough was familiar with this study and learned that I was working with our engineering department to contract a topographic survey.

Being familiar with past mapping projects from the 1990s, Kimbrough was curious as to whether all of the old data and new data could be tied together to create a comprehensive map for management planning.  From that point, I took on the task of researching and acquiring orthophotography, lidar data, bathymetry data, and cave maps.  Once the data was acquired, it was processed and compiled into a GIS map.

“If we know a certain point might have intact concentrations of material from a late archaic site, which is the case near the existing parking area, it can be overlaid with a proposed parking area both vertically as well as horizontally. This three-dimensional view includes buried as well as surficial data,” said Kimbrough.

Orthophotography: The first step in compiling the Silver Glen Springs Exhibit map was acquiring the orthophotography from the Land Boundary Information System website. Retrieving orthophotography is as simple as performing a map search and doing a Geographic Zoom of Section Township and Range. In this case, Section 25, Township 14 South, Range 26 East and Section 30, Township 14 South, Range 27 East Tallahassee Meridian.  Imagery in State Plane East Zone was chosen with the majority of the site being acquired in 2011.

Bathymetry: The next step was collecting the bathymetry data shapefile from the “Florida Department of Environmental Protections Carrying Capacity Study of Silver Glen Spring and Run,” also in State Plane East. Some of the key tasks in the study included conducting a baseline vegetation and recreation impact survey, developing carrying capacity and management recommendations that included a mooring buoy plan, and conducting recreation surveys.

Cave system map: The third step in the mapping data set was the cave system map produced by Karst Environmental Services, Inc., and Eric Hutcheson.  Hutcheson and his dive crew are the only individuals allowed to dive the spring.  He and his crew have mapped roughly 2,000 linear feet of underground river, with veins more than a dozen feet high and 25 feet wide and a cavern 110 feet tall.

Hutcheson’s cave map was inserted into CAD as a tiff image and digitized.  Once digitized, it was scaled, rotated, and georeferenced to a best fit by picking points on orthophotography that was also imported into CAD. Once georeferenced, the cave system was exported as a shapefile.  Having an understanding of both CAD and GIS greatly enhanced the process.  In some cases, things were easier to accomplish in one software versus another.  For example, I find it much easier to digitize in CAD.

Typically, data acquired by the National Forests in Florida is in an assumed coordinate system both vertically and horizontally and funded by  independently operated program  areas. The problem with this approach, however, is that the data is often not comprehensive, cohesive, or mutually integrated among various program areas such as engineering, recreation, and archaeology. Silver Glen was no different; some of the data existed, but not in one easily accessible location.

For this project, the surveying contractors were instructed to perform the topographic survey using the same systems as the existing data, vertically by the North American Vertical Datum of 1988 (NAVD 88) and horizontally by the Florida State Plane Coordinate System, East Zone.

Layers: Once the surveyors completed the survey in a hardcopy and CAD format, the fourth step was to export the CAD file as a shapefile and overlay it with the existing data.  Once University of Florida processed the archaeological survey results and delivered the shapefiles to the Forest Service that data was then imported into the Silver Glen GIS map as additional layers.

Lidar: The last step was acquiring the lidar data from the University of Florida and processing it with Fusion Software.  The orthophotography was imported for orientation, and the lidar .las files were imported to evaluate contours and bare-earth model to look for patterns of undulation.  (Fusion is a powerful lidar viewing and analysis suite developed by the Siviculture and Forest Models Team of the Pacific Northwest Research Station.  The software is readily installed and will run on corporate workstations without the need to obtain administrator privileges, and it’s provided free from the Forest Service Remote Sensing Applications Center website.  The site also provides free tutorials.)

Through this project we were able to merge various mapping efforts into a comprehensive, multi-faceted GIS product, which resulted in improved coordination for a multi-disciplinary approach to planning. Basically, the right hand and left hand were now moving in sync. “Silver Glen Springs is a flagship project that exemplifies the benefits of using the full spectrum of surveying and geospatial disciplines,” says Carl Petrick, ecosystems staff officer.

My coworkers and I worked as a team to create a map that will continue to function as a template for other sites and as a framework for our organization.

The Forest Service mission: “Caring for the Land and Serving People.”

The United States Department of Agriculture (USDA) was established in 1862. In 1876, Congress created the office of Special Agent in the USDA, the first federal forestry expert to assess the quality and conditions of the forests in the United States. The office was expanded into the Division of Forestry in 1881.

Prior to 1891, there were no Forest Reserves or precursors to National Forests. This changed with the Forest Reserve Act of March 3, 1891, which authorized the President of the United States to set apart and reserve certain public domain lands as Forest Reserves managed by the U.S. Department of the Interior (USDI).

President Benjamin Harrison created the first Forest Reserve, known as the Yellowstone Park and Timberland Reserve, on March 30, 1891. This Reserve encompassed 1,239,000 acres of public land, now part of Yellowstone National Park and parts Shoshone National Forest and Bridger-Teton National Forest in northwest Wyoming. The Organic Act of 1897 allowed for proper care and management of Forest Reserves, which were placed under the General Land Office, a USDI agency.  From 1897 to 1905, USDI agencies managed the Forest Reserves.

This administrative transfer of the Forest Reserves from USDI to the USDA allowed Gifford Pinchot, the first chief forester of the Forest Service, to unify the administration of all federal forests within the USDA. The Forest Reserves were renamed National Forests in 1907.  Prior to 1911, most National Forests were established from public domain lands of the west.  Post 1911, Congress passed various acts allowing the secretary of agriculture to acquire lands from willing sellers, placing into federal ownership certain eastern lands meeting specified conditions.

As related in the archeological survey report by the University of Florida Department of Anthropology, Silver Glen Springs has changed dramatically through time from past human use.

One of its channels leads out to Lake George from the spring, flowing to the east. (The Silver Glen Buoy Site Plan depicts it with the bathymetry data overlaid.) It was dredged for shell from the late 1800s through the early 1900s; the shell was used as building material for roads.  At one time, before European settlement of the New World, so much material had been deposited in that channel by native populations that it actually filled in the run.

Beginning around 5000 or 6000 BC, shell and other organic material were deposited, building up mounds and midden that stabilized into man-made landforms.  Then, in the late 1800s, people started cutting that material away, digging it down to near water-level, removing several thousand years of data.  Today, undisturbed material still remains beneath where this digging was performed.

“There’s a lot of paleo data encapsulated in the shell mound and midden remnants, which form a protective layer or matrix,” said Kimbrough. “From this, we can look at the diet people had thousands of years ago, which is indicative of what the environment was at the time. There may be spikes or declines of certain species from being overharvested. Also, seasonality of occupation can be determined because certain things are only available or more prevalent at certain times of the year.”