Images courtesy of Oregon Department of Geology and Mineral Industries and created by Daniel E. Coe

In less than six years since it was formed, the Oregon Lidar Consortium (OLC) has collected 16 million acres of high-resolution data, which is used for a variety of mapping, research, and analysis projects. On their own, many users of the OLC’s data—including federal, state, and local government agencies as well as private companies—would not be able to afford to collect nearly as much airborne lidar data, if any at all. The OLC has significantly increased geospatial capabilities in Oregon and established a model that other states can follow.

Origins of the Consortium 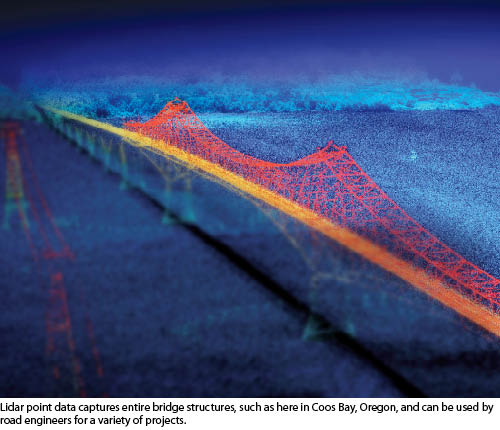 Oregon’s tradition of first-in-the-nation initiatives include its pioneering 1973 land-use planning legislation that created an institutional structure for statewide planning. It required every Oregon city and county to prepare a comprehensive plan in accordance with a set of general state goals and required every city to establish an “urban growth boundary” to prevent sprawl. This occurred just as geographic information systems were becoming viable tools for planners. Therefore, in Oregon, and particularly in the Portland area, GIS and land-use planning grew up together, enabling the state’s celebrated land-use and transportation planning system. In 2003, the Oregon Department of Geology and Mineral Industries (DOGAMI) joined pilot efforts to collect high-resolution lidar data throughout the state. Four years later, it formed the Portland Lidar Consortium that brought together 17 federal, state, and local agencies to acquire 2,200 square miles of high-quality public domain lidar data. The consortium approach enables the seamless collection of large swaths of lidar data while greatly reducing collection costs per unit area, ensuring uniform quality control and allowing even small jurisdictions to benefit from the acquisition of lidar data that they otherwise would not be able to afford.

In 2007, the state legislature directed DOGAMI to extend its lidar collection efforts throughout the state. Legislators approved the consortium model for collecting and sharing data and gave modest seed money, with the goal of providing statewide high-quality lidar coverage. To this end, DOGAMI formed the OLC and later developed data specifications, selected a vendor, and set up funding partnerships for data collection blocks. Initially, it identified as its area of primary interest the inhabited portions of western Oregon, then expanded it to include other areas where it could find partners willing to pay the cost of data acquisition. 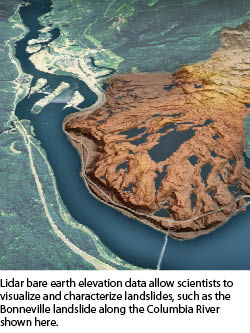 OLC has now covered more than 95% of the state’s populated areas and about 26% of the state’s total area, according to John English, DOGAMI’s lidar data coordinator. “Our goal is to collect lidar data where people need it, at the highest resolution and best quality possible,” he says. “By acquiring data at high precision and accuracy, we give the end users the best potential to perform their research, from micro topology to vegetation studies.”

“It would be great to have more outlying areas, but everyone is strapped for funds,” says Bill Clingman, senior GIS analyst at the Lane Council of Governments (LCOG). “So, unless someone like the Bureau of Land Management [BLM] or the U.S. Geological Survey steps up and covers some big areas, I don’t know that we will ever get a lot of the rural area covered.”

Uses of the Data

The OLC data is used mostly by natural resources agencies, especially for pre-planning and designing, for both visualization and measurement. It has allowed the BLM to identify “a tremendous amount of our wildlife habitat,” says George McFadden, a siviculturist with the federal agency’s Oregon state office. “Lidar data is three-dimensional and gives us a vertical structure that we have never been able to have. We are in the process now of developing models to identify retrievals, down to the individual tree level.” LCOG, Clingman says, has used OLC data for such projects as local wetland inventory, canopy analysis, and power transmission line location.“We have used OLC data to supplement our terrestrial lidar data for engineering purposes, mostly to provide existing conditions to design teams,” says Ron Singh, geometronics manager and chief of surveys for the Oregon Department of Transportation (ODOT), which flew its first airborne lidar project several years before the OLC came into being and has been using terrestrial lidar since 2005. For ODOT, the OLC data has replaced the digital elevation models that it previously used to orthorectify aerial imagery. “We can now use lidar data much more reliably for that.” 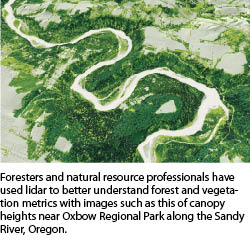 Watershed Sciences, Inc. (WSI), the firm that OLC hired to produce all of its data, developed the project’s specification, according to Matthew Boyd, WSI’s founder, CTO, and co-CEO. “I came up with the OLC’s eight-point-per-square-meter standard, which has become referred to as the high resolution lidar standard,” says Boyd. At that resolution, he explains, you illuminate about one quarter of the surfaces. “If you are trying to hit a tree top or the edge of Bonneville Dam, you have about a 25% chance of seeing it in your data.”

He proposed that standard because it can be achieved over wide areas at a reasonable cost. “It is where the current technology allows us to stay efficient.” In the rest of the country, he points out, the majority of wide area projects are occurring at far lower resolutions.

“We do not sub-contract anything, we do not off-shore anything; we do everything, period,” says Boyd. “We use our own aircraft, our own sensors, our own field crews, and our own processing staff.” 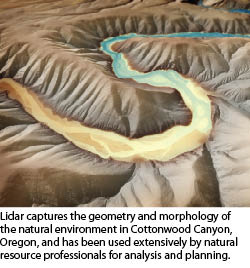 The area WSI acquires every day depends a lot on terrain. “In nice weather, the goal for any one laser is 20,000 acres per day. The OLC gets provisional first data, and they help us do the review, and then we finalize it within 60 days from acquisition. Quick delivery is another standard.”

The OLC data “has been an exceptional data set for the areas that we do have covered,” says Clingman. “However, I don’t think that it would ever take the place of an on-the-ground survey for a specific site.”

According to Jake MacDonald, a physical scientist with the Portland District of the U.S. Army Corps of Engineers, the OLC data is “great” but “it tends not to cover our areas of interest at the level of detail that we require for engineering purposes. They are not trying to get, say, every face of a dam, like we are. They are trying to capture the watersheds, landslides, and drainages, while we like to target our flight lines more toward the features that we are trying to get, seeing them from all directions.”

For McFadden, the OLC data exceeds his agency’s resolution and accuracy requirements. “We can get much more accurate maps with the lidar data than with just aerial photos or other existing technologies.” He gives the example of a boundary that is defined as the east bank of a river as it was in 1902. “With lidar data, we can go back and determine fairly well where the older channels were and then have a much better idea of where the river was and where the boundary really should be than if we just look at aerial photos.” 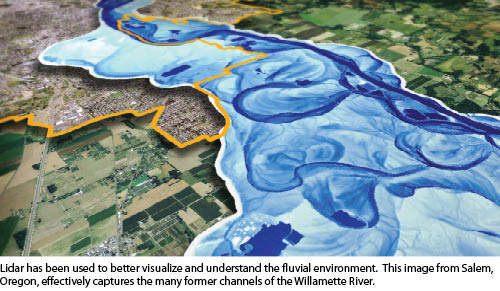 ODOT’s existing ground-mapping accuracy requirements vary from project to project and also within each project, depending on the terrain, Singh explains. “If a project includes any rugged terrain, the accuracy of the OLC data is well within our needs for that area.  For typical natural ground terrain, OLC accuracy again is within our requirements. For machine-graded areas without any tree canopy, we have found it to be within our accuracy requirements most of the time. However, when we map hard surfaces—such as pavement, concrete walks, and bridge decks—it is generally not within our accuracy requirements, and we typically use something else in those areas. In urban situations, where there are many man-made features, typically the point resolution of the OLC data is not high enough for us, and so we will use a terrestrial stationary scanner for those areas.”

“When mapping for engineering purposes, we should be representing the terrain and other features as they exist at the time of our survey.  If we use lidar data that was collected by someone else at a prior time, we will conduct field verifications to make sure that nothing has changed,” Singh adds. “As licensed surveyors, we have to certify the data, so we take steps to verify a variety of things—including coordinate systems, projections, and that the data represents the existing ground conditions at the time of our survey.” 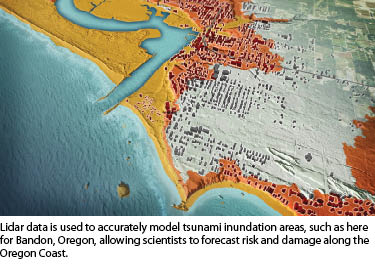 While OLC lidar data has been used successfully by ODOT’s geotechnical and other staff for studies of large areas, says Singh, it is not very useful for small areas. “We typically would not utilize OLC data for small projects, such as replacing a small bridge. We would simply survey the area using our own tools. If, instead, we were surveying for the design of a major highway realignment that needed a study of various alternatives, we might use the OLC data for that. Another example for OLC data utilization is projects that require us to study the drainage basin for a wide area on either side of our project.”
Singh expects the quality of the OLC data to continue to improve. “Probably not very rapidly, however, because one of their purposes is to fly high so that they can get multiple returns and cover a wide area,” he explains. “If the data’s accuracy improves, we will use more of them.”

“If you judge the program by how many people are consuming the data, it is wildly successful,” says Boyd. “And that is the goal. We want public domain data sets widely available and heavily used. The OLC should be very proud of what it’s accomplished. No one has been able to replicate it across the country. It’s a huge public value and has created hundreds of jobs.”

“We want to make sure that everybody knows that we like the OLC and that we have a good thing going here,” says McFadden.