The future of unmanned aerial vehicles for the geospatial profession looks to include bigger platforms for better sensors.

A Drone by Any Other Name

The question came up recently: “What’s the difference between a drone and a UAV?” The short answer is: none, the terms are synonymous. Which opens up a big can of alphabet soup when it comes to nomenclature: What is a UAV, UAS, RPV, and so on?

If you search Wikipedia for “drone,” you are taken to the UAV page where the first definition is: “An unmanned aerial vehicle (UAV), commonly known as a drone, is an aircraft without a human pilot on board.” This seems to be the common acceptance of the word and is supported by people in the field who also use the terms “drone” and “UAV” synonymously. Moreover, the term “drone” has entered the public’s lexicon with this meaning, and thus the media tend to use this term—with varying degrees of accuracy.

Let’s dive into that alphabet soup to see if we can shed light on these TLAs (three-letter acronyms).
Drone: the popular name for UAV.

This term is used to encompass the entire system, that is, the unmanned aircraft, the ground control system, the control link, a specialized datalink, and the associated mapping/imagery processing software.

RPV: remotely piloted vehicle. Strictly speaking, unmanned military, especially weaponized, aerial systems are RPVs, not drones. Although they are fully capable of autonomous flight, a pilot has control of the aircraft throughout the mission (for obvious safety reasons).

Here at Professional Surveyor Magazine, we use either UAV or UAS to describe what the public often refers to as drones. These terms are more accurate and avoid military connotations, because what we cover are the types of aircraft used for aerial mapping and remote sensing.

Although UAVs may be flown in the United States for limited public- and academic-sector uses today, widespread commercial use across all classes of UAVs awaits much-anticipated FAA rules slated for September of 2015. Nonetheless, the development of UAVs for geospatial applications continues unabated. Here I discuss where the technology stands today and what we can expect from the next generation of UAVs. 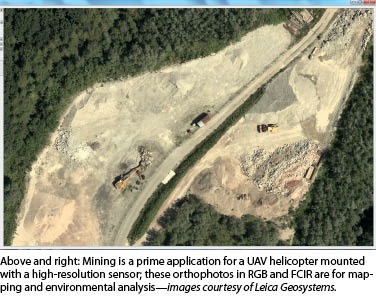 Most readers are familiar with the first wave of UAVs. These are small (often less than 2.2 kilograms), generally powered by electric motors, and equipped with non-metric digital cameras in the 10 to 16 megapixel range. Notable examples include Trimble’s Gatewing X-100 and senseFly’s eBee.

The upside of these “first generation” UAVs includes relatively low cost and ease of implementation with a minimum of training. For many geospatial applications where survey-grade accuracy is not essential, the geodata deliverables, including orthophoto DEMs and DSMs, are quite adequate.

The downside of small-class UAVs are their short flight times, usually at or below one hour, and lower image resolution and precision compared to what can be accomplished with higher-end, survey-grade sensors.

Now we are seeing the beginnings of the next generation of commercial UAVs. These are bigger, heavier platforms to accommodate high-resolution metric cameras, lidar, and other sensors. In many cases they can carry multiple sensors, for example a high-resolution camera teamed with lidar, allowing for more data to be collected in a single pass.  Their higher resolution sensors provide much greater detail for applications requiring survey-grade accuracy. They typically use gas engines that allow for these heavier payloads and enable longer flight times, often four hours and more, for extended missions.

A good example of this next generation of UAVs is the recently announced collaboration between Leica Geosystems and Swissdrones, pairing Leica’s high-resolution RCD30 camera with Swissdrone’s Waran TC-1235 UAV. We asked Ruediger Wagner, Leica imaging product manager, for the background on this product.

PSM Aerial Mapping: What was the rationale behind the selection of a dual-rotor helicopter craft as opposed to a fixed-wing craft?

Ruediger Wagner: For certain applications the rotor helicopter has advantages such as vertical take-off and landing [VTOL]. The dual rotor has particularly good maximum takeoff weight [MTOW] and is very compact and stable in flight.

AM: Are there specific applications in mind for this UAV? What kind of test projects have you tried?

RW: Due to restrictions in UAV use for commercial applications we have specific applications in mind: mining and agriculture primarily, but for sure more in the long term. With the Leica RCD30 as payload we can not only collect highly accurate images but also provide dense surface models with classified point clouds and multispectral imagery for environmental mapping. We are currently in the testing phase.

AM: One concern about UAVs is safety. What are the safety features incorporated into this UAV? For example, how does it handle a power loss? Does it incorporate any “sense and avoid” technology?

RW: Naturally, auto-rotation is a standard feature, but ultimately safety is heavily growing with rigorous testing and safe operating procedures as well as good training. Currently, there is no sense-and-avoid technology integrated; this may be a feature in the future, as well as other possible measures such as parachutes.

AM: Is there a date set for availability?

RW: Yes, we are planning on it being available for demos from Q2 2013; full system availability for purchase once it has passed all testing; certifications and safety checks later in the year.

AM: The literature refers to using the Leica RCD30 in conjunction with lidar. Is the Swissdrones Waran TC-1235 capable of carrying two sensors at the same time?

RW: While there is currently only the RCD30 option available, the system is indeed capable of carrying two sensors (lidar or thermal or hyperspectral). As they can connect to the camera controller for data capture and control, the only things to consider are sensor weight and power requirements. Smaller sensors will probably easily meet those requirements.

AM: What else would like to tell our readers about the new Leica RCD30/Swissdrones Waran TC-1235 UAV?

RW: It’s a robust system designed for ruggedized use and configurable to carry other sensors or for crop-spraying applications, as well. With the workflow available from Hexagon, an ideal solution is to provide up-to-date, high-resolution image data and surface models/point clouds for a variety of applications.

For groundbreaking work in this area see “Autonomous Autorotation of an RC Helicopter” by Pieter Abbeel, Adam Coates, Timothy Hunter, and Andrew Y. Ng of Stanford University. This paper can be found at www.heli.stanford.edu along with videos of helicopter UAVs using this technique, as well as amazing videos of helicopter UAV aerial acrobatics.

This may well be the next generation of geospatial UAVs. Helicopter platforms have been used in Hollywood and professional photography for many years because they are widely perceived as a stable platform for photography. The benefits of robust carrying capacity and VTOL are significant. It stands to reason that any fixed-wing UAV large enough to accommodate heavier sensor packages (the Leica RCD30 medium-format camera weighs more than four kg) would require a ramp, catapult, or runway, adding to the cost and complexity of the UAS/UAV. 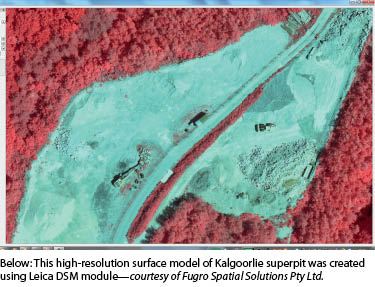 The inherent safety features of helicopters are also advantageous. As Wagner notes above, when a helicopter loses power, it can use an emergency procedure known as autorotation (see sidebar) to bring the craft and instrumentation package down safely. Fixed-wing UAVs can, of course, simply glide to earth. But what of the third major platform: the multi-copter UAV? Unfortunately, autorotation benefits do not apply to these UAVs due to their small prop size.

A personal example is telling: While I was flying a popular entry-level quadcopter, a firmware glitch killed all four electric motors at an altitude of approximately 20 meters. The quadcopter simply fell out of the sky; only its light weight and a grassy landing surface kept it from being destroyed. Imagine this same scenario only with a vastly more expensive platform and sensor package. Several cardiac defibrillators would be needed to stave off the ensuing heart attacks of the ground crew.

Given all these advantages, it is clear why autonomous helicopters will play a starring role in the next generation of geospatial UAVs.