The tendency for cities is to grow: spatially, by population, or both, and in Pakistan’s capital of Lahore, it’s been both. Urban growth leads to uncontrolled population and unplanned areas, usually along the edges of cities. Rapid urban population growth has outpaced the ability of city authorities to provide housing, environmental protections, and health infrastructure. Specifically, these areas suffer from a lack of sanitation, potable water, and health centers, as well as from the results of a loss of agricultural land.

GIS and remote sensing technology using secure data can help in the analysis, spatial and temporally. 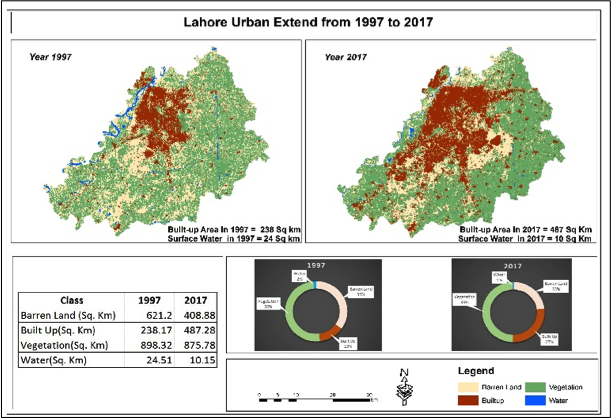 In this study, we have taken the Landsat-7 data for the analysis and comparison of the year 1997 and 2017 (Figure 1) and calculated the urban extent difference using the ERDAS 14.0 ArcGIS 10.3. Our analysis has revealed that the city of Lahore has grown quickly during the last 20 years (Figure 2). Through the land-cover change analysis, we see that in 1997 Lahore was 233 square km and as of 2017 has grown to 484 square km, which is more than 100% and its fastest growth of the history. 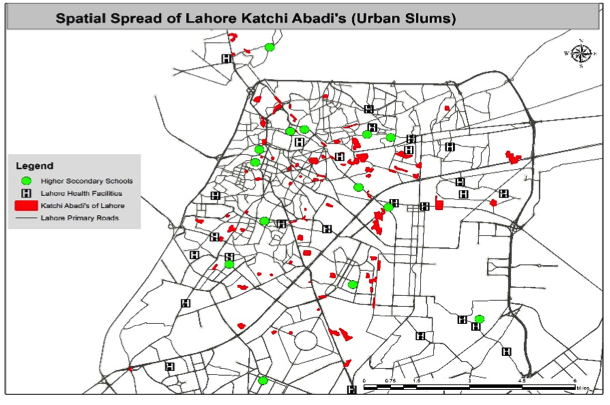 This process is informal, so government departments are not responsible to provide basic municipal facilities. As a result, the people of Lahore katchi abadis face such issues as poor: health, drinking water, sanitation, education, quality housing structures, etc. All the factors affect the lives of these people and pollute the overall environment of nearby urban areas. 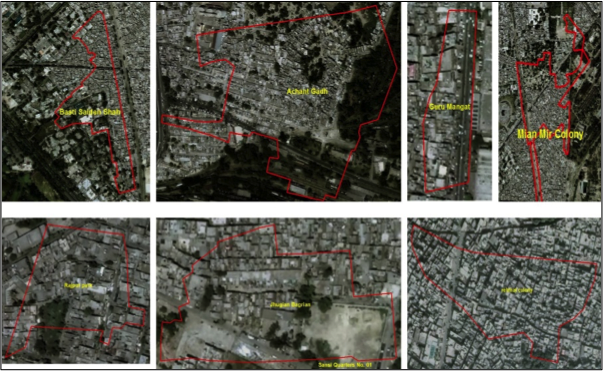 Their residents are living there illegally and therefore have no land rights; the land owned by provisional and federal government and private citizens. Encroachment has become an issue in Pakistan because this illegal occupation is the cause of many other issues, such as poor social health, safety, education, infrastructure, and many others.

The chief minister of Punjab announced a plan to give land rights to these illegal occupants in 2012. A GPS survey was conducted to identify the occupied areas across Punjab. Due to this study, around 326,516 people will get the rights of residence, which should improve their living standards. Also, development work of 40 units was begun before 1985 and has continued. 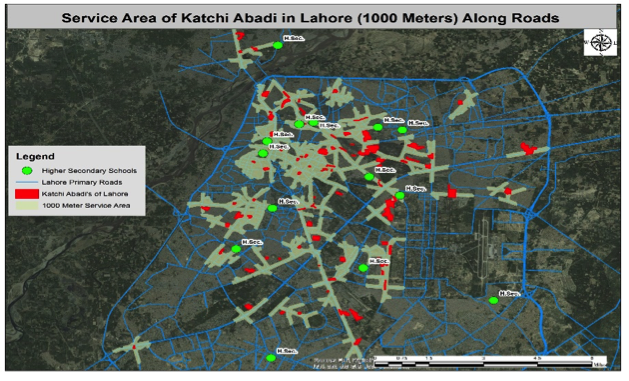 Lahore is called as the city of gardens and colleges, but the higher secondary educational institutions are far from these dwelling units; 12 out of 25 higher secondary schools are more than 1,000 meters away (Figure 4). In order to improve residents’ quality of life, the provision of basic education is important.

“Data for Slums – A geospatial analysis of living conditions of the Pakistani poor helps to improve them.” Comment