A geospatial company helps prepare for an environmental impact statement by scanning and orthorectifying historic imagery.

In the 1940s, Idaho Power applied for a license to develop the three-project Hells Canyon Complex on the Snake River. After a bitter political contest with public power advocates who wanted to build one high dam in the canyon, the then Federal Power Commission issued Idaho Power a license in 1955 to build the Brownlee, Oxbow, and Hells Canyon power plants. The Hells Canyon Project was the last of the three projects to be constructed. 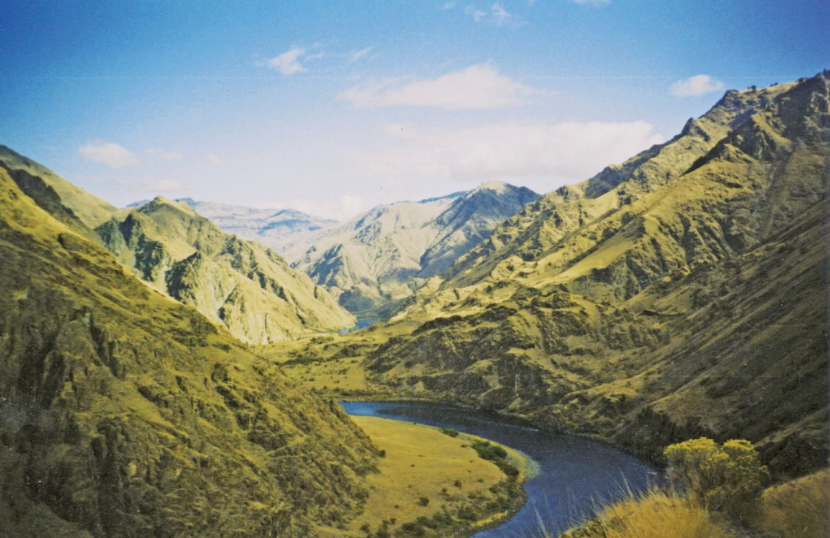 Throughout the years, Idaho Power engineers have contracted numerous aerial photography missions to document geological changes in the canyon. They now possess a large inventory of film canisters from past projects dating back to the 1950s. The 9″ x 9″ film negatives are degrading due to their age, and it was determined they should be scanned to preserve the valuable aerial time-record.

Idaho Power contracted with Aero-Graphics, an aerial mapping company based in Salt Lake City, to complete a test project to evaluate the feasibility of scanning and mosaicking the historic film, and the results were positive.

Idaho Power’s business objective for this effort included acquiring, scanning, and orthorectifying imagery from the Aerial Phototography Field Office (APFO) in Salt Lake City, Utah. Idaho Power had historic film diapositives and contact prints for the same flights, but we advised that image quality would be better if the original negatives housed at the APFO were scanned directly. 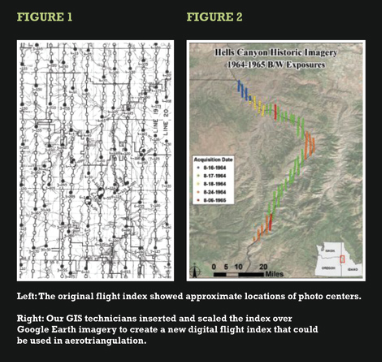 Idaho Power initially furnished us with photo mission data, including the flight date, scale, and project name of the photo prints held in their archive.  We then forwarded this information to the APFO and asked for a scanned copy of the original flight index that showed approximate locations of photo centers (Figure 1).  The flight index was forwarded to Idaho Power for analysis to determine which exposures were required to cover their area of interest.

Our GIS technicians manually inserted and painstakingly scaled the index over Google Earth imagery to create a new digital flight index that could be used in aerotriangulation (Figure 2).  Individual photo centers were digitized and classified by color according to flight date.

Once the desired exposures were known, an order was placed with the APFO for 12.5 micron scans, furnished in black and white, color, or color infrared (depending on the film type). The scans were delivered to us on hard drives, along with any camera calibration data associated with the sensor.

Sometimes, the only camera calibration data available was the calibrated focal length of the lens. The other parameters, including principal point offset and fiducial measurements, had to be approximated based on modern camera calibrations.

We used Trimble’s Inpho’s Match-AT software to perform fully analytical digital aerotriangulation. Automated tie point matching was not possible due to the graininess of the scanned film.

We were forced to assign an approximate X-Y value to the center of each image, based on visual matching to the same features in Google Earth. The image block was then stitched together by manually measuring tie points.  These points tie each image to its neighbors in the same flightline and also to those in adjacent flightlines.

Photo-identifiable control points, common to the historical data set and current ortho imagery, were identified and measured manually. Out of necessity, many of these were less-than-ideal features such as peaks, saddles, and bushes that had changed minimally over time.

These photo IDs, along with tie points and images, were then processed together in a final bundle adjustment to refine the photo center points and provide the best orientation solution that minimized cumulative error throughout the project.

Once the AT solution was complete, we used Inpho DTMaster to check every model and ground control point in stereo. The AT technician, Karl Jensen, confirmed that some of the expected errors with the photo IDs did exist. These errors were introduced through a variety of factors:

The worst error residuals were vertical in nature and did not significantly affect the horizontal integrity of the orthophotos.

In conjunction with minimizing ground control error, Belliston ensured that all parallax was cleared as much as possible and that all tie points were on the ground–with no points floating or digging. Our QA/QC procedures aim to find gross errors and correct them before the AT results are passed on to our ortho image technicians.

A 60-foot autocorrelated grid was generated and used for the orthorectification surface. Usually the surface was choppy due to the age and quality of the film.  Therefore, it had to be manually inspected to ensure that no floating or digging points were adversely affecting the model. For the oldest imagery data sets, a USGS NED surface had be imported to fill in areas of poor accuracy.

The orthorectified imagery tiles were then adjusted in Inpho’s OrthoVista software to compute subtle radiometric adjustments that compensate for visual effects within individual images. OrthoVista then performed a block-wide brightness/contrast balance by adjusting adjacent images to match. This achieves a uniform appearance across the project.  Multiple orthophotos were combined into one seamless, balanced, and geometrically corrected ortho mosaic.

We then conducted our standard quality-control procedures. The orthoimagery was inspected by a QC inspector, Bernie Doud, completely removed from the project, where linear and above-ground features were reviewed to detect misalignment and warping. In addition, Belliston and I (as the project manager) spot-checked all deliverables for proper radiometric balance, accuracy, and data integrity prior to delivery.

Ultimately, Idaho Power was so pleased with the outcome of the project that they intend to convert their entire library of film archives to this digital, georeferenced format. The final orthorectified imagery will be used in GIS for Hells Canyon relicensing studies, including evaluating sediment changes along the Snake River in Hells Canyon to prepare for consultation of the Sediment Monitoring Plan per the Hells Canyon Final Environmental Impact Statement.