Bentley’s annual infrastructure awards and technology showcase was held in October 2019 in Singapore, the city/nation that is widely considered to be the global center of infrastructure innovation. While always an impressive event, this year was less about new products and more about showcasing examples of real-world implementations of digital twins, continuous surveying, and digital construction. These touted concepts and the tools developed to implement them have truly begun to bear fruit.

Two of the annual award-winning projects standout in the field of “4D Construction,” the 4th D representing the temporal, or scheduling, component.

The digital design from Foth for the University Ave. reconstruction in Cedar Falls, IA not only contributed to bringing the project in at budget on a compressed schedule, but the 3D visualizations were key in addressing concerns of the local community, as well. Credit: Bentley. 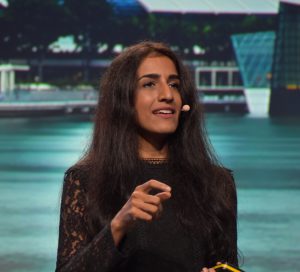 We’d like to recommend watching a powerful guest keynote by Ayesha Khanna, CEO of ADDO AI, on our YouTube channel. One of the concerns AEC professionals have about digital cities is that they might become huge, unwieldy, top-down, singular model environments that will be difficult to update with the all-important “continuous survey” data that will keep them current. Instead, Khanna describes amalgams, or federations of many data sources, powered by appropriate AI.

It’s refreshing that these two major investors in the new firm, Digital Construction Works (DCW), acknowledge that general contractors and clients need flexibility in choosing products and cannot be bound to single sources, and it’s along the lines of other collaborations we are seeing among geospatial vendors.

You’ll hear more this in an upcoming xyHt Measure This! podcast we recorded at the event with DCW COO Jason Hallet—a fellow surveyor. Among the points discussed is the opportunities, brought about by 4D construction integration, for subs using different brands of equipment and software to be able to work together seamlessly.

It was also announced that SYNCHRO, the 3D construction project management suite that we saw demonstrated at the launch of the HoloLens 2 earlier this year has now expanded to support horizontal and heavy civil construction. Speaking of the HoloLens 2, Microsoft and Bentley also announced at YII2019 that SYNCHRO is now fully supported for end-user projects on this immersive headset.

Next year, for the first time, Bentley’s Year in Infrastructure will be held in North America: Vancouver BC October 12-15, 2020.