Enhancements made to improve the handling of satellite systems (also called constellations) and the increasing number of signals produced by these systems provide a tangible benefit to any solution that requires precise positioning.

Depending on the time of day and the geographical location, some of today’s modern global navigation satellite system (GNSS) receivers can track more than 50 satellites at a time with an increasing number of signals delivered per satellite. But how can geospatial professionals ensure that all available and usable signals are received and processed by their GNSS rover to meet the highest quality standards? And why does it matter?

The first satellite navigation system was launched by the U.S. military in the 1960s. Less than two decades later, the country’s Global Positioning System (GPS) became the first satellite constellation capable of supporting instantaneous determination of position and time information across the earth. Owned by the U.S. government and operated by the U.S. Air Force, GPS began to deliver signals globally by 1994.

Today, there are several global and regional constellations comprising more than 100 satellites delivering valuable positioning information to an unlimited number of users.

Since the widespread availability of GPS, and its successors—GLONASS, Galileo, BeiDou, QZSS, and NavIC—several companies have gone through at least 10 generations of digital signal processing hardware and software. Expanded tracking capabilities for new satellite systems and signals have been added with each hardware generation, together with proprietary schemes for reducing the effects of signal multipath and measurement errors.

Size Matters: In addition to advancing the receiver/rover technology to process the expansion of navigational satellite constellations, the hardware has gone through a significant makeover. What used to be the size of a suitcase, the inner workings have been miniaturized to what is known today as the microchip (or chip).

These chips are integrated into a GNSS reference receiver or positioning engine that captures the signals from available satellites. This is easy to imagine when picturing the evolution of central processing units (CPUs) used in computers. There have been exponential gains in computer power and density of digital storage. These advances have facilitated corresponding progress in GNSS hardware.

Energy and the Environment: Another valuable advancement in this technology benefits the environment. A crucial component of a GNSS receiver is the custom integrated circuit that is responsible for digital GNSS signal tracking. Expanded tracking capabilities for new satellite systems and signals are added into each hardware generation, together with a company’s proprietary schemes for reducing the effects of signal multipath and minimizing measurement errors.

Integrated circuit technological advancements have meant that expanded functionality could be achieved with a reduction in footprint and power consumption—vital factors for human-portable devices. While these advancements reduce power consumption, there is a trade off with the availability of so many constellations. To track all the signals takes more electronics, more CPU cycles, and more power consumption.

Compensated Point Measurement: Apart from the improvements made in GNSS technology over the past 40 years, inertial measurement devices have seen a corresponding advancement in their miniaturization and capabilities. Inertial Navigation Systems were originally based on mechanical gyroscopes and large accelerometer hardware, once the domain of high-end navigation systems for missiles, spacecraft, submarines, and ships.

Today, micro electro mechanical systems (MEMS) integrate motion and orientation measurement sensors on a single chip and are included in ubiquitous devices such as smartphones. MEMS inertial sensors are not reliant on a clear view of the sky in order to operate and therefore provide complementary functionality to GNSS positioning. Inertial sensors have been added to high-precision GNSS hardware to support antenna pole- tilt compensation.

This newer technology works well in compromised tracking environments, providing the benefit of not having to level the antenna pole while surveying points. Working with all the constellations and being able to compute the position of the pole tip vastly improves surveyors’ workflow.

Solution Integrity: A strong benefit of having multi-constellation tracking is that it can strengthen solution integrity. Integrity gets back to having more systems (which are somewhat independently managed) and having the ability to counter check with one if something goes wrong with another. A loss of signal, or in the case of a satellite broadcasting incorrect information, it is good to have backup.

In the rare examples of faulty GNSS data, the ability to cross-check results between satellites and systems is vital for ensuring a high level of integrity with the final reported user position.

The evolution of high-precision GNSS equipment has occurred ultimately with a viewpoint of benefiting the user. This has translated into several advantages, including:

A Look at Satellites

The best way to understand how to maximize the benefits of several constellations is to put them into context. The number of satellites in the sky, their orbits, what they broadcast (frequencies and codes), and their generations all play into maximizing the value to the user. 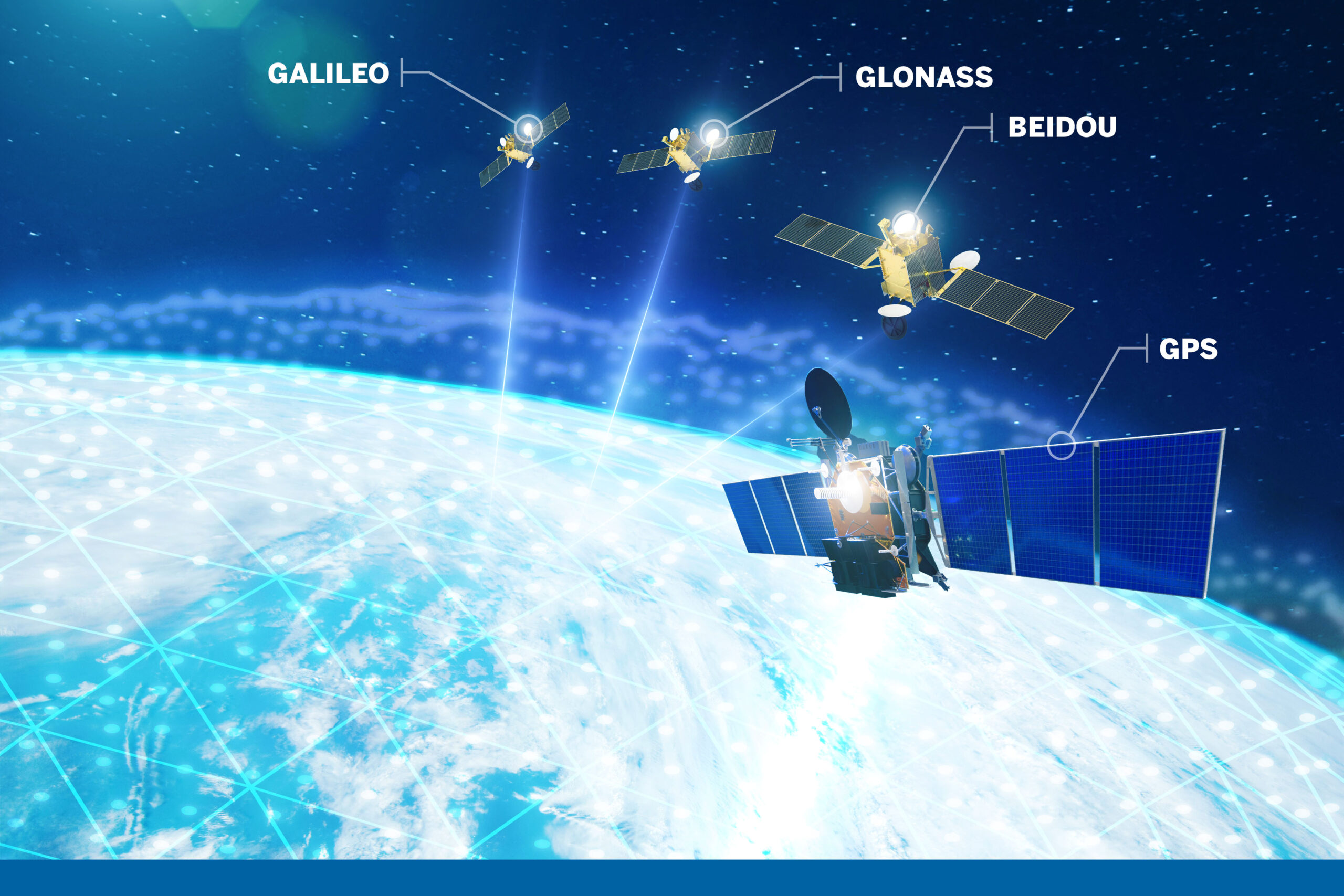 In the Sky: There are currently more than 100 navigation satellites that make up the six primary GNSS constellations. While the Japanese QZSS and Indian IRNSS/NavIC systems are regional, the other four—GPS (U.S.), GLONASS (Russia), Galileo (Europe), and BeiDou (China)—have global orbits. Of note, QZSS’ regionality and the China-heavy BeiDou system provide users in the Asia-Pacific region with a disproportionately large number of satellites in view compared to the rest of the world.

Each country must consider the tradeoff between how long the satellites will last in orbit and how often they will be decommissioned for new, upgraded satellites to be launched. With each generation of satellites, atomic-clock and signal generation hardware has improved. Moreover, additional signals have been added for range-measurement purposes, as well as new navigation data channels. In all, improvements in GNSS satellite hardware have facilitated higher accuracy and more consistent capture of positioning data on earth.

As technology advances to seamlessly capture signals and data from existing and new satellites, hardware and software must also evolve to manage the sheer number of navigation satellites in orbit. During the 1980s, tracking more than 12 satellites at the same time wasn’t even considered. Today, it is essential as the current landscape makes it possible to track as many satellites that are in view of the receiver.

Without the ability to use all the signals available, users might have to wait for a signal fix or may not be achieving the most precise measurements possible.

Satellite orbits are generally defined in terms of their orbital radius, eccentricity, and inclination angle. The eccentricity relates to the shape of the orbit (e.g., circular, elliptical) and inclination is the angle of the orbit plane in relation to the earth’s equator. The orbital radius determines the orbital period. Geosynchronous satellites have circular orbits with altitudes around 35,000 km; MEO satellites have altitudes of approximately 20,000 km.

Frequencies and Codes: Constellations operate on different frequencies (also called carrier signals) and their positioning data is accessed by hardware that can process each constellation’s unique code. The five primary GNSS constellations operate on the L1, L2, L3, L5, L6, E1, E5, E6, B1, B2, B3, and S bands as given in the table above. Note that some of these frequency bands are reserved for regulated services and therefore may not be available for open access in the future (e.g., Galileo E6).

GNSS carrier signals are modulated/modified by binary codes. Details of open access codes are published so GNSS receiver manufacturers are able to build equipment to track the signals. In the case of military applications, the codes remain secret and they serve to hide data that is also modulated on the signals.

GNSS codes enable receivers to measure the time the signals take to travel from satellite to the user antenna. Multiplying the code travel time by the speed of light yields the range, or distance, between satellite and receiver. The characteristics of each GNSS code help to determine the precision with which range measurements can be made; they also govern how susceptible the signals will be to signal multipath. Additionally, the complexity and length of the code measurements affect how readily signals can be acquired.

As a rule-of-thumb, with GPS alone, sub-meter accuracy can be achieved with a single receiver via the use of single-frequency code measurements. The Galileo E5-Alt-BOC codes are designed to yield low multipath characteristics and sub-meter level code measurements.

International cooperation has helped to harmonize parts of the GNSS signal structure to achieve a good level of interoperability. For example, QZSS is highly compatible with GPS given that the QZSS signal structure is essentially based on GPS.

The Galileo E1 and E5a bands are aligned to GPS L1 and L5, respectively. Given that virtually all GNSS signals fall within the L-band, this enables common antenna hardware to be used to receive signals from multiple constellations. GNSS infrastructure is known to be an important driver of technology, efficiency and economic growth, therefore nations that have developed GNSS constellations have widely promoted the open use of satellite signals internationally.

An important error source for GNSS measurements is induced by the upper-part of the atmosphere—the ionosphere. As implied by its name, the ionosphere contains atoms that have been ionized by radiation from the sun. When satellite radio waves pass through the ionosphere, they become biased.

For single-frequency GNSS users, the only way of limiting the impact of ionospheric errors is to operate reference and rover RTK equipment over short range (less than 15 km), or alternatively making use of approximate ionospheric correction models. Multi-frequency GNSS observations facilitate high-precision GNSS operation over wide spatial regions.

GPS was primarily conceived by the military with defense of the U.S. in mind. Today, the commercial importance of GPS is vast and positioning technology has become an indispensable part of the economy. A 2019 study by the National Institute of Standards and Technology (NIST) found the benefits of GPS to the U.S. economy was approximately $1.4 trillion since it was made available for civilian and commercial use in the 1980s.

Other countries have realized the economic importance of GNSS, as well as the strategic importance of being able to control coverage and access to their own constellations.

There is virtually unlimited potential to harness the power of GNSS constellations, and it is to be expected they will continue to expand and improve. But, to what end? Are more satellites really better?

Countries that have launched GNSS satellites have done so with a view to supporting positioning and timing determination on and above the earth, both regionally and globally. In order to estimate position and time, it is necessary to measure ranges to at least four satellites in the sky. Moreover, the distribution of the satellites in the sky over a given point on earth need to be well distributed in order to provide a “strong fix.”

Satellite constellations are therefore designed to ensure at least a minimum number of satellites will be in view over the coverage footprint to yield reliable position and time estimates. Having more satellites in view increases the probability of users having sufficient coverage in areas where signals may be obstructed.

For example, QZSS IGSO satellites are placed overhead in Japan for much of the day helping with satellite visibility in built-up city regions of the country.

Geospatial professionals who work in harsh tracking environments benefit most from GNSS equipment that is able to track all GNSS constellations. The spatial distribution of satellites in the sky, paired with signal diversity facilitates fast, accurate, and reliable position calculations with this type of equipment.

For those who only use older generation GNSS equipment, they will be restricted in terms of operation under even moderate tree canopy, or in built-up urban settings.

The key takeaway: accessing all GNSS constellations (i.e., more satellites) makes it possible to collect the most accurate positioning data in the most efficient and reliable way possible. This is attainable when having a technology partner who is always working on the next generation and will be ready for future constellations.