Low-lying Gulf Coast communities along the Anclote River in Pasco County, Florida, have a long history of summer flooding.

In 2012, after Tropical Storm Debby brought more than 12 inches of rain in a 24-hour period to the Tampa Bay area, the residents of the Thousand Oaks subdivision in the Trinity community experienced widespread, long-lasting flooding. Other residents along the Anclote River and in the city of New Port Richey along the Pithlachascotee River experienced similar flooding. 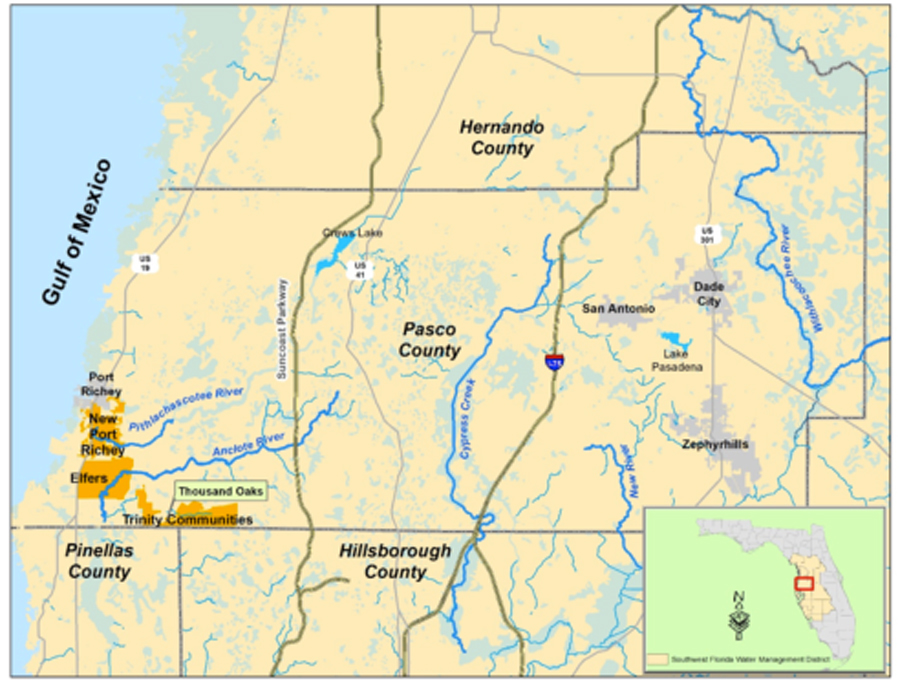 Later that year, the area residents formed a task force and identified ways to help alleviate future flooding issues. Among their main concerns was how future development would affect downstream communities, such as Trinity.

Recommendations by the task force were slow to be enacted and flooding from storms and hurricanes continued in Thousand Oaks during the summer of 2015 and again in 2016. That year Hurricane Hermine made landfall in northern Florida but brought torrential rain to the Tampa Bay area, affecting more than 2,700 residences and resulting in more than $111 million in property damage and another $30 million to $50 million in damages to roads and infrastructure. Then, in the late summer of 2017, Hurricane Irma went through Florida too, causing renewed flooding and repetitive loss property damage.

In its role as a Federal Emergency Management Agency (FEMA) Cooperating Technical Partner (CTP), the Southwest Florida Water Management District (SWFWMD) uses hydrological modeling to update the Digital Flood Insurance Rate Maps (DFIRMs) and, during the Environmental Resource Permitting (ERP) process, to predict future floodplain impacts resulting from development. The model data must conform to FEMA guidelines for topographic mapping and the use of lidar technologies. By 2017, Pasco County and SWFMWD determined it was time to update the floodplain and storm-water models.

Because previous topographic lidar from 2007 and 2011 did not meet the newer FEMA specifications for floodplain mapping, a new lidar mission was planned. During the planning phase, SWFWMD project managers from the Engineering and Watershed Management Program and the Mapping and GIS Section, along with Pasco County storm-water engineers, determined that the USGS 3D Elevation Program standard Lidar Base Specification (LBS) for Quality Level 2 (QL2) would not adequately define the low-lying, wetland, and coastal areas of Pasco County and that several of the critical watersheds for Pasco County, such as the Anclote River Watershed, include areas in adjacent Hillsborough County.

Considering these factors, in the spring of 2017, the SWFWMD issued a request for proposal that included the higher pulse density, eight or more pulsed per square meter, and vertical accuracy of LBS for USGS QL1+, but with additional breaklining to delineate conveyances and water bodies to match a 2017 Hillsborough County survey. The additional criterion of seamlessness along the Pasco-Hillsborough border was imposed for the Pasco County RFP. 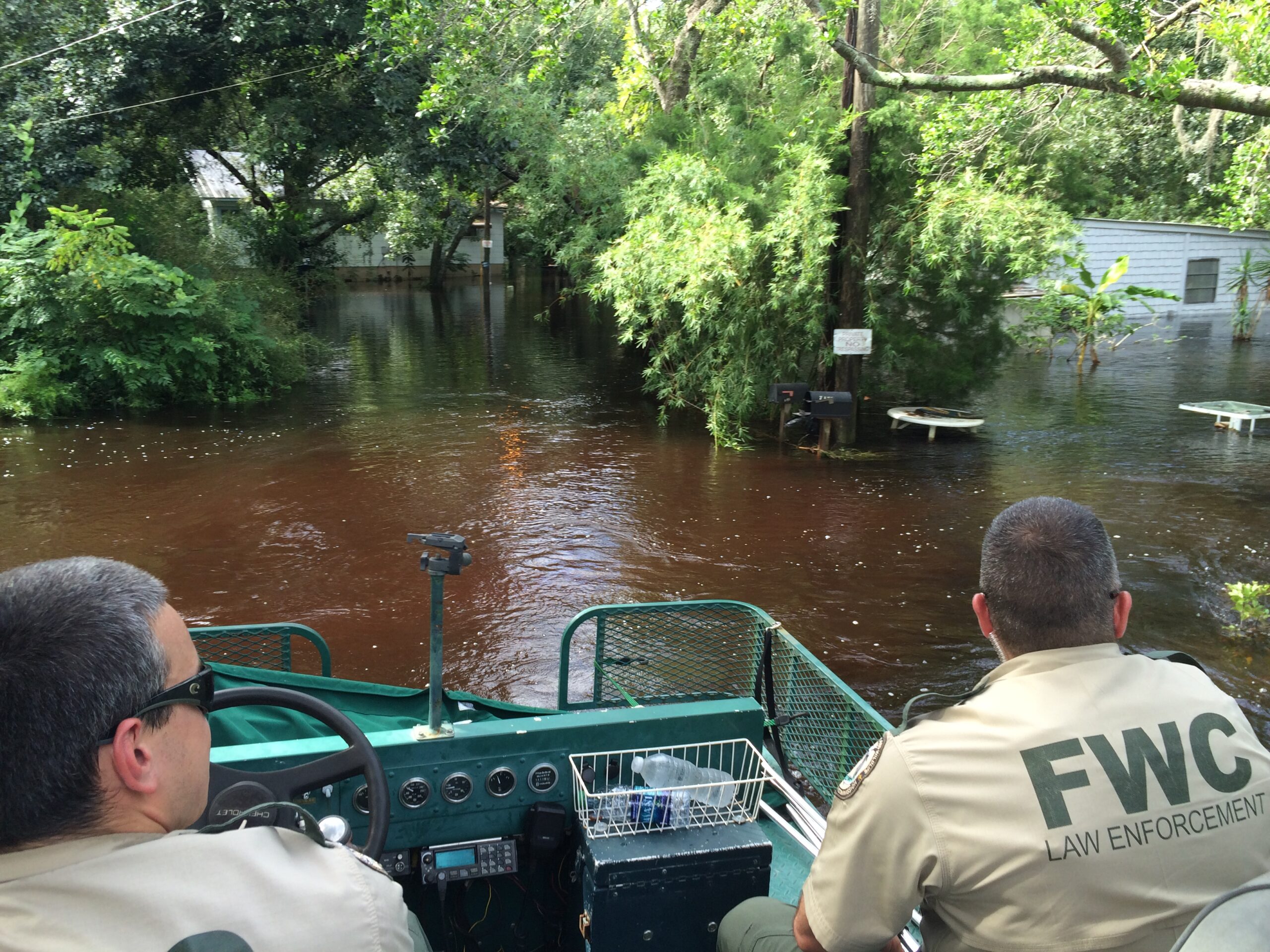 Dewberry, a privately held engineering firm, was selected, in part, because Dewberry presented a “sensor agnostic” approach, and also because the company had successfully mapped Hillsborough County the previous flying season. Rather than simply repeating the previous year’s Hillsborough County mission, Dewberry determined the sensors and flight plans that would best meet the exacting modeling needs of the cooperators, and still remain within the combined SWFWMD/Pasco County budget. After a thorough review, Dewberry helped the cooperating agencies determine that a Riegl LMS-Q1560 sensor, along with a flight plan to ensure an Aggregate Nominal Pulse Density (ANPD) of 12 pulses per square meter, would accomplish the mapping objectives to update the floodplain and storm-water models. The mission was planned for a single sensor during the 2018 winter flight window with a final delivery date of October 2019.

The Atlantic Hurricane season in the fall of 2017, during which time the Pasco County mission was being planned, was the fifth most active hurricane season on record. A total of 17 named storms, including hurricanes Harvey, Irma, and Maria, caused more than $100 billion in property damage in Florida. Although Hurricane Irma went through Pasco County in September 2017, resulting in localized flooding, there were no lingering effects, nor was there any rain activity recorded or observed within 72 hours preceding and/or during the lidar mission from January 14 to 24, 2018. Luckily, ground conditions were ideal for lidar collection to support the floodplain and stormwater modeling.

Building Footprints: In dense residential areas such as those in Pasco County, it is a common practice when constructing a digital elevation model (DEM) to “bulldoze,” i.e., remove laser points inside and/or on the roofs of buildings, the lidar surface and to permit triangulation to occur across what would be the building’s foundation.

With higher point density and closer pulse spacing in projects such as this, it becomes more likely that elevation differences along the building’s foundation are greater. The elevation differences in these “good ground points” produce artifacts of triangulation that appear in the DEM as small depressions (“basements”) for each structure. While individually the “basements” may not account for much, in terms of water storage volume, when there are several thousand all storing water in a large residential sub-division, the water storage volume becomes significant. Hence, one of the special requirements of the project was to classify rooftop pulses (ASPRS Class 6) and construct building “rooftop/dripline” polygons.

Using the rooftop polygons conflated to the highest ground elevation within two-and-a-half feet of the building (and adding six inches to the elevation) and then interpolating those building rooftops into the DEM, produces a slightly elevated above ground-level building foundation.

With these 3D foundations elevated in the DEM, modeled surface-flow water is directed around and between buildings, rather than through buildings or into the artificial basements. To complement the rooftop/non-directly connected impervious area (nDCIA) polygons, road, driveway and parking area directly connected impervious area (DCIA) polygons were compiled from the lidar and concurrent imagery. The DCIA polygons were conflated to ground elevations.

The requirement to classify building rooftops (ASPRS Class 6) presented yet other new challenges. The larger cities in Pasco County, including New Port Richey, Dade City, San Antonio, and Zephyrhills, are all cities incorporated approximately 100 years ago. While newer subdivisions are being built out currently, there are also many unincorporated, rural tracts and small towns that date to the early 1850s.

Typically, the roofs in all but the newest subdivisions are partially, if not totally, obscured by 50-plus-year-old oak trees, and other species. Although the lidar penetrated through the trees and reflections were recorded from the rooftops, automated filtering routines failed to properly classify all of the returns, leaving some obscured rooftop returns unclassified. Manual filtering was required to identify obscured rooftop points. 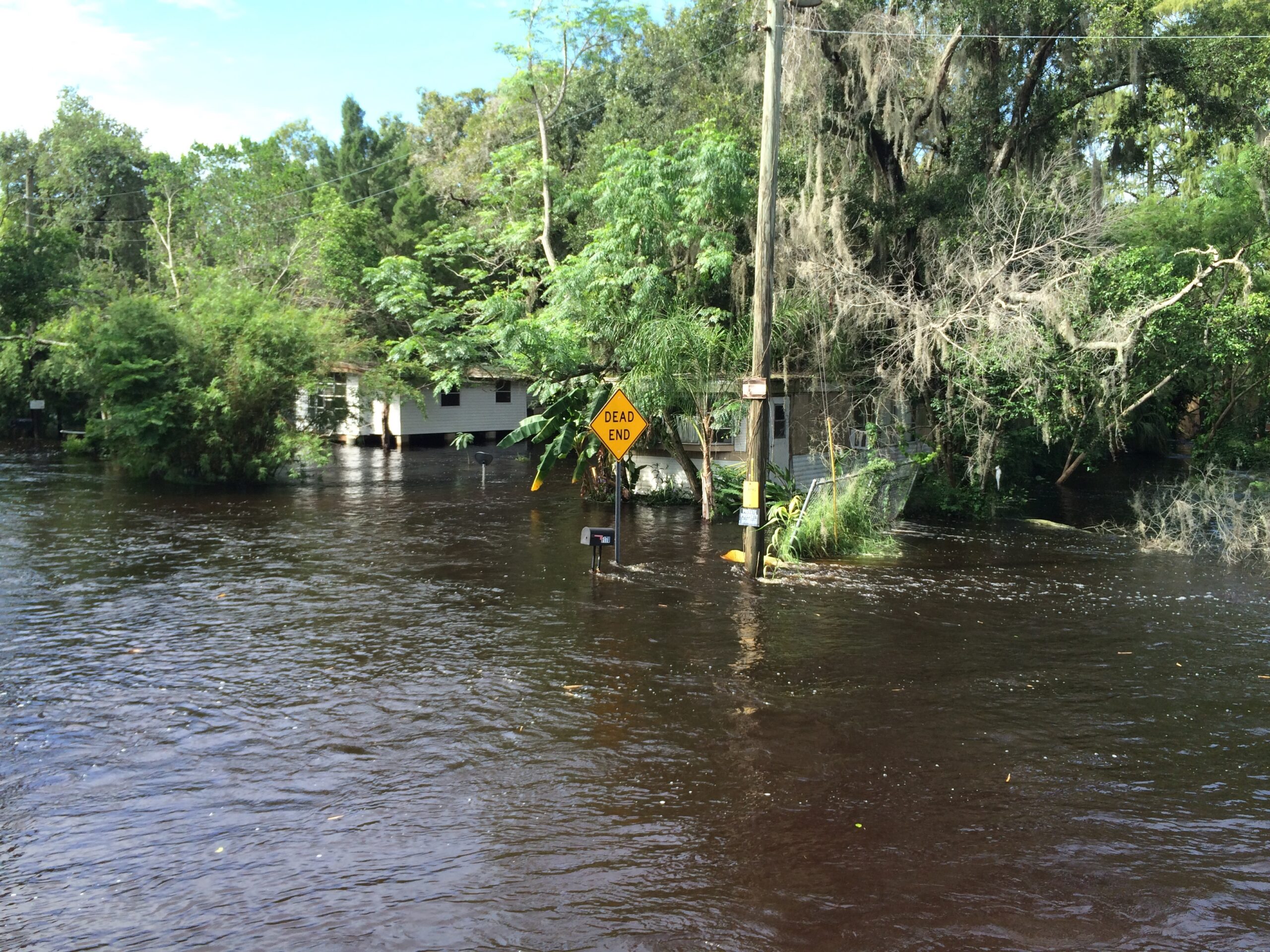 The opposite issue occurred along the densely populated coastal areas such as New Port Richey and Port Richey. In these areas, roofs of single-family houses and mobile homes were easily classified by the automated filters, but buildings are separated from each other by only a few feet.

While the rooftops of homes in large treeless tracks were easily identified by the lidar classification algorithms, those roofs were extremely problematic to automated polygon extraction scripting. In cases of both heavily treed areas and bare but densely constructed areas, a considerable amount of manual classification and/or polygon cleaning was required.

Dewberry delivered the classified lidar point cloud and hydro-flattened/partially hydro-enforced Digital Elevation Models to the SWFWMD and Pasco County in October 2019. While new floodplain and stormwater models are currently in production, it is apparent that the new lidar data represent a tremendous improvement over the previous 2007 and 2011 datasets.

The older 2007 and 2011 lidar surveys provided a point cloud with an average density of one pulse per square meter and could support a five-foot-by-five-foot DEM cell-size. The combination of the higher pulse density, closer pulse spacing, and the greater and more accurate ground elevation resolution justified the construction of a higher resolution, two-and-a-half feet square DEM cell-size.

In this higher resolution DEM, features such as single-line dry drains, ditches, and berms are well represented as the greater DEM resolution more precisely models the subtle undulations in the terrain.

The new floodplain and stormwater models are currently being finalized by the SWFWMD. The consulting engineers involved with both the older and current models are finding dramatic temporal, functional, and accuracy differences between the low- and high-resolution lidar datasets. Hydrological features, ditches, berms, water bodies, and man-made features are much better defined in the new dataset.

Dave DeLoach, of DeLoach Engineering Science, PLLC, in Orlando, is currently developing the stormwater model for the Anclote River basin.

We have found the new lidar products to be significantly more accurate and more useful than in years past,” DeLoach says. “For large-scale stormwater model development, that means we can spend less time manipulating [correcting] terrain data and more time thoughtfully focused on model construction, parameterization, and testing.

These hydrographic and hydraulic features, once parameterized for floodplain and stormwater models, will produce more defined floodplains and provide better estimates of future flooding. Through Best Management Practices and the SWFWMD Water Management Program, these data will be used to help lower flood risk in the coastal and low-lying communities in Pasco County.

Acknowledgments: We want to acknowledge Jezebel Pagan-Garcia, Yuan Li, Jim Owens, and Nicole Hewitt from the SWFWMD and Michael Garrett (ret.) and Joseph Amoah, from the Pasco County Public Works Department as well as David DeLoach for his contributions to the H&H modeling for the county.