A geospatial intelligence company’s passion for innovation yields custom solutions for remote sensing, including some designed to support disaster response. 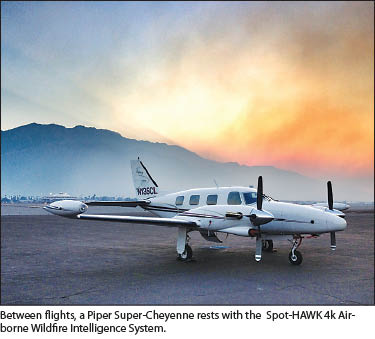 A remote outpost gets a call from headquarters a thousand miles away—they need to scramble. A Piper Super-Cheyenne is sitting on the runway fueled and ready to go, equipped with computer hardware and a custom thermal infrared sensor. The aircraft’s twin turbines whine in anticipation.
The time is 4:30 p.m. in southern California, and a mountain is on fire.

From 25,000 feet, the plume from the August 2013 California fire (referred to in the national press as the Rim Fire) is clearly visible on the ground below. The cabin of the Piper hums with the drone of the propellers and the excitement of the crew. Speeding high above the raging inferno below, the aircraft is a symphony of technologies working together to deliver mission-critical information as quickly as possible.

Nestled in the forward unpressurized sensor bay of the aircraft, the Spot-HAWK 4K camera incorporating technology unique to the company Range and Bearing (see sidebar), watches calmly over the fire and relays information to the crew. Though the data is being gathered thousands of feet above the fire, all of the information is being relayed in real time, a thousand miles away, to Range and Bearing’s international reconnaissance office.

Thermal imagery is the technology that allows heat to be visualized. By using the infrared (IR) spectrum of electromagnetic radiation imperceptible to the human eye, specialized sensors are able to produce images of emitted heat energy. This allows sensors to detect spectral signatures through obstacles such as haze and smoke, which is particularly useful for forest fires, as hot spots can be easily and rapidly identified and the boundary of the fire is revealed by the heat radiated from the ground.

Range and Bearing first considered existing commercial thermal imaging sensors, but the available options didn’t meet the specification for the types of work the company wanted to perform. An initial sensor they bought from a vendor had a field of view of 5 to 20 degrees; this wasn’t wide enough, so it was time for an upgrade.

Starting with a forward-looking infrared sensor from a trusted Swiss company, Range and Bearing then developed their own thermal imaging system from scratch with a 120-degree field of view with several thousand more IR pixels. The equipment is custom-designed in CAD and custom-machined by the company’s research and development office. 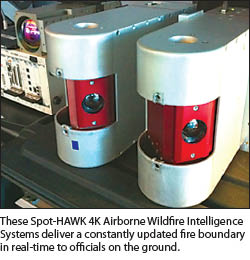 Once the images are obtained, they need to be positioned. There were existing technologies that allowed rectification through ortho-rectification of a limited number of points, but that wasn’t good enough, says Range and Bearing’s president and CEO, Doug Campbell. “We wanted every pixel.”

As the sensor flies over the fire, it generates an orthomosaic in real time, giving information not only of heat but position as well. The company has applied their software expertise to author custom computer programs for positioning the information employing an inertial navigation system integrated with GPS. Accuracy meets or exceeds that of popular mapping solutions such as Google Maps and Bing Maps, which is more than adequate for fire operations.

The turn-key Spot-HAWK 4K Airborne Wildfire Intelligence System can cover 70 square miles per minute from the air. Their sensor is a fully supported solution that delivers a constantly updated fire boundary in real-time to officials on the ground, as well as to the U.S. federal government’s National Interagency Fire Center’s Enhanced Geospatial Portal via the cloud.

Such an intense inflow of information also requires powerful programs to handle it, and
again, as Doug states, “There just wasn’t any software that did what we needed to do.” As an innovator, the solution is an obvious one: create your own. 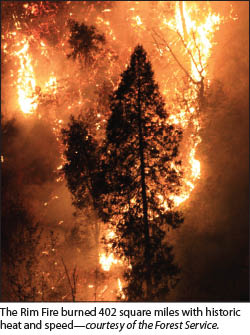 At the Range and Bearing headquarters, mission control, the small icon of an airplane inches its way across the screen, each new movement filling in swaths of the multicolored polygon underneath. This is the nerve center of the whole operation; live data rea
dings are beamed in from the field crew in California via software engineered to handle large sets of data. While the aircraft is flying in any remote location, employees in the office are able to tap into the live feed of data, providing updates on data every few minutes.

Every bit of information about the aircraft is also fed to mission control. When the sensor modes are changed, the flight path updates, as well as special dynamics about the data such as how it has changed over the flight time, allowing the analyst to provide such information as how fast the fire itself is moving. This is of prime importance for making safety-of-life decisions.

A local command center can be exceptionally mobile as well. If the fire happens on short notice, a complete wildfire operation can be set up with laptops in a coffee shop, with people in the airplane providing data while the ground analyzes it and provides intelligence. Communication is key.
On the front lines of the fire, the experience of the firefighters is different. The “fog of war” surrounds them, the air thick with smoke and the mission complex and

urgent. As the heat begins to spread, the area contained by the fire is changing, requiring firefighters to be light on their feet. Every bit of intelligence is crucial, and there is a watchful eye thousands of feet above, guided by a room of experts thousands of miles away, helping map decisive paths through the smoke. Visual communication is very important to keep firefighters safe.
Data collection of this nature is extremely time-dependent, and many measures are taken in order to guarantee the quickest delivery. Custom software written by Range and Bearing generates mission plans for the new jobs, and a close relationship with Air Traffic Control is a necessity in order to get their complex flight plans approved. 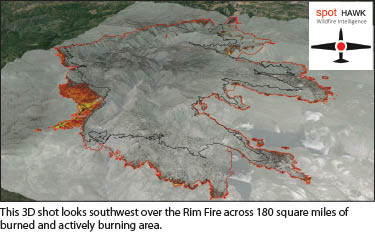 Because the aircraft is doing, as Doug puts it, “wacky stuff” such as running parallel lines in the same area for hours on end, the process to get a flight plan approved is critical. A delay of an hour will mean that the company is not meeting its planned response time, so the process to get into the air needs to be as streamlined as possible.

Plotting the Course Ahead

This specific type of rapid data collection and dissemination is an emerging and unique field, so convincing old clients that this technology can help them is sometimes a challenge. Building relationships is a critical component to success.  Doug says, “After every fire season, we work closely with our clients to make sure they are happy. We are always striving to improve our business,” working to improve performance based on feedback from the fire season.

People who use the company’s solutions data are happy to extol its virtues. Paul Doherty, technical lead for the Esri Disaster Response Program, is on the front lines of real-time data technology. Consistently working to provide new ways in which the public can be better informed about natural disasters, he explains, “Mapping wildfire and search and rescue incidents needs to be real-time in order to save lives. What [they’re doing] makes the flaming front of a fire visible on interactive maps that can be used by analysts, decision-makers, and public information officers.”

Doug Campbell hasn’t stopped thinking about innovation. The ability to provide real-time remote sensing analysis has deep implications in many fields. An example of the potential for expanded services came to mind while flying a wildfire near the coast; the company was able to image a warm water plume from a nearby power plant. These types of ancillary discoveries provide a peek into the many applications of this new technology. “We are always looking to expand, through both vertical markets and private enterprises.” 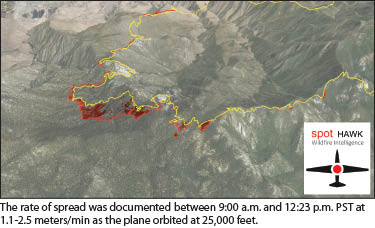 The Rim Fire, once a chaotic maelstrom of ash and smoke, is fully contained. The Piper lands, and the crew retires to their rooms, still on call for any other wildfires that might start during the “red flag” alert state of the fire season. If they are called back out to the field, they are able to be in the air within an hour. But for now, they can relax.

Doug Campbell was educated at the University of British Columbia as a microbiologist. Surveying and geospatial analysis, however, has a tendency to work its way into almost any physical sciences field, and he found himself working from the skies as an observer using geospatial tools to analyze the ground underneath.

Speeding over the terrain conducting water quality surveys in an airplane, Doug learned quickly that this was a field ripe for innovation. “I really like exploring new technology, and I wanted to see how I could apply GPS and imagery to this field.” As a photography enthusiast, Doug chuckles as he adds, “Also, I wanted an excuse to use my new camera.” Though he was working for the government at the time, this yearning for innovation led to only one conclusion: striking out and starting his own company.

Range and Bearing (now with offices in British Columbia, Canada and Bellingham, Washington) was incorporated with the idea of bringing innovation to the remote sensing market through new technology and innovative practices, and their first system proved that mission. Doug had the dream to take aerial imagery away from just photographs, and he developed a system in 1991 that would position frames of video instead of static pictures. Mounted on the tail of a Piper Navajo, the custom two-axis gimbal system was able to take video from the air at an altitude of 500 feet, using GPS to georeference all of the frames along the way.

As the only system like this in the world, the potential was huge. The video-based system allowed the company to take on large projects, such as mapping the coastlines of arctic Canada for environmental precautions, analysis intended to measure the capabilities of the shoreline to resist oil spills.

While on this project of multi-day, overnight outings in remote areas of arctic Canada, the members of Range and Bearing could attend to another passion: outreach and education.  Doug relishes such opportunities. “While we were up there, we had the opportunity to teach the locals about our technology. We went to schools and taught the local Inuits along our path about remote sensing and our equipment.”

The company continued to experience the restless drive to innovate, and they began looking into active thermal IR sensors. When the available sensors at the time couldn’t do what they wanted, the only choice was to build their own.