Advances in sensor technology have, in recent years, allowed the remote sensing community the luxury of simultaneously acquiring data from complementary acquisition systems. We now have the ability to characterize a surface in terms of measuring both form and function.  This has been the holy grail of those who study earth surface processes for as long as we have had the opportunity to view natural landscapes from airborne and satellite platforms. Two technologies in particular have caught the attention of remote sensing academics and professionals: hyperspectral imaging, particularly in the form of imaging spectroscopy (IS), and lidar.

The evolution of passive optical imaging has evolved from multispectral scanning (MSS), where we acquire a relatively small number (typically less than 20) broad discrete spectral bands, to IS where we characterize the electromagnetic spectrum as a single continuous measurement, represented by many hundreds of spectrally contiguous measurements. Functionally, the difference between these two technologies is profound, where with MSS data we detect the presence or absence of a feature, while with IS we finally have the capability of measuring a surface process. Lidar data have been readily available for earth observation for over a decade. The nature of these data makes them ideal for the definition of surface form. Our ability to isolate ground measurements has yielded elevation models (DEM) with unprecedented levels of detail and accuracy, to the point where it has forced the more traditional photogrammetry community to rethink its approach to mapping. The added advantage with lidar data is that, along with the ground data, we also have the opportunity to address the vegetative structure through the use of the vegetation hits. These data have provided researchers with a wealth of material over the past five years to explore the vertical and horizontal structure of vegetation assemblages. Together, these two technologies provide us with a rare opportunity to examine the form and functioning of the earth surface. This article explores the workflow and specific application of a lidar/IS production and application. 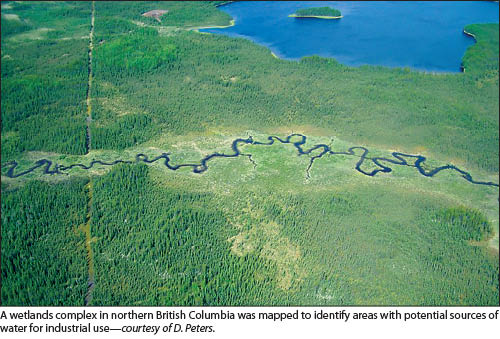 The Hyperspectral-Lidar Research Group has, since 2006, developed a toolbox that is designed to optimize the spatial integration of the multiple data sets and to use these data in the extraction of meaningful information.

An outline of the process is presented in Figure 1. The software tools were originally developed in IDL, but given the data volumes and current processing demands we have ported to C/C++ and Python and have done implementation on Linux/OSX workstations. The data collected from the multisensor airborne platform (MAP) are summarized in Table 1. Lidar’s current state of the art is well in excess of one point per square meter. The issue with the lidar data is not necessarily the posting density, as over a certain point points become redundant, but rather the power associated with each posting. It has been our experience, especially when working in forested environments, that high-density/low-energy shots will not have sufficient energy to penetrate to the forest floor and return to the sensor. These systems will typically favor the upper canopies and underrepresent the structures that are below the co-dominant canopy layers and ground. We are currently using two IS systems, designed and manufactured by Specim in Finland. The Specim V-SWIR (visible to short wave infrared) dual system consists of two separate cameras, flown on a fixed-wing platform, that are configured to image a single image cube (IS data are typically stored as a three-dimensional cube where the x and y axis represent the spatial domain and the z axis yields the spectra domain). This system yields 492 contiguously sampled spectral bands at a ground sampling distance (GSD), analogous to spatial resolution, of two meters (at 1500 m. AGL.).

The second system is a smaller VNIR (visible, near infrared), Specim’s Eaglet spectrometer, with a spectral range of 400 to 900 nm. This system was originally intended for use with a helicopter platform that yields ca 0.5 to 1 meter GSD but is also flown on the fixed-wing to yield a 1 meter GSD.

The workflow in Figure 1 was based on an operational need to address specific questions with the data pertaining to forest inventory and operations. The IS data are radiometrically corrected using sensor calibration data. The atmospheric correction and reflectance conversion is accomplished using a Radiative Transfer Model (RTM), in our case MODTRAN. The RTM models the transmissivity of the atmosphere, taking into account the constituent make-up of ideal atmospheres.

The result is an apparent, or at sensor, reflectance that has most of the atmospheric noise removed. To develop an exact representation of the atmospheric influences, we need to collect ground reflectance targets and apply an empirical line calibration. The most challenging initial task in processing data from the airborne system was how to integrate the two datasets spatially so that the user could be certain that the IS was pointed at the same spot on the ground as represented by the lidar data. This is accomplished in two steps. The first is through the integration of the inertial navigation data (roll, pitch, yaw, and time stamp) in the initial spatial calibration step. The second step is through the orthorectification of the hyperspectral data rather than a traditional ground-based “bare earth” orthorectificating process. We created a digital surface model for this process, gridded to the intended spatial resolution of the IS data. We sorted all of the first return heights with each of the grid cells and calculated the height quantiles. We chose the 85th percentile height as representing the top of the co-dominant canopy. The use of this height rather than the highest point smoothed the surface, removing any outliers. The IS data were orthorectified to this surface model, yielding a co-registration of the lidar and IS to within one pixel. We commonly work in two modes with these data: grid- or object-based. The grid-based mode is where we degrade the area of interest to a coarser resolution and upscale the lidar and IS data in a logical fashion. Upscaling the IS data does not involve averaging, as this would compromise the spectra. Instead, we use the lidar-based gridded data as a mask  to create a series of IS layers that are analyzed separately. The object-based analysis depends on our defining morphologically based objects through a user-specified logic. For example, individual tree crowns are commonly defined using a series of morphologically based stopping rules. The result is a set of vectorized crown-objectives that serve as a basis for sampling of the IS data for further analysis.

One application area that lends itself to the data and analytical processes outlined here is related to wetlands mapping. This is a topical area that is of broad interest with respect to wildlife biology, landscape ecology, hydrology, and climate change.