“Future of Surveying” essay contest runner-up Gordon Wilson begins his thoughtful essay with a reflection on his first survey with his father and shares his optimism for the future of the profession and a global community of surveyors. Gordon, a Maine native, holds a BFA in creative writing from the University of Maine, Farmington, and is now pursuing a BA in survey engineering technology at University of Maine Orono. His essay has earned him a $500 cash award from PSM.

The first survey job I ever worked on was a leveling circuit my father ran in the backyard of our house.  It was autumn, and we were planning an ice rink with boards on it, using an Abney level to set their height. My father was a civil engineer and he still is. I was a teenager then. When that memory is brought up in conversation, he jokes that I’ve “grown a few rods” since then. 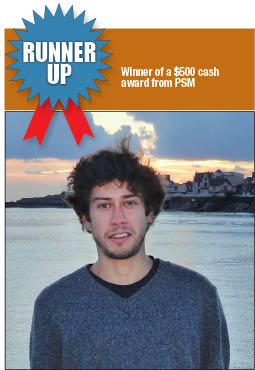 When asked about the future of surveying, my father doesn’t sentimentalize much. He sees RTK, total stations, and the decrease in number of crew men and supposes that it’s only a matter of time before the profession is taken out to pasture. However, I’m more optimistic.

Let’s recognize the technological shift for what it is and what it isn’t: a wave of new and exciting opportunity, not the end of the world. I believe those who stay open to the technological advances will join the community that is growing and shaping the profession in future years. Practically speaking, I’m talking about learning to work with GIS data.

When looking for a job upon graduation, survey students should be looking for what their company can provide in terms of training. The rate of technological advancement is demanding surveyors to prepare for a life-long education. I’ll be looking to work with computers to manipulate data and develop end products for clients.

As far as attending to a geospatially charged world, I think that consumer-based surveying products such as handheld GPS are not going away. The need for this information has firmly integrated within our society.

As a student I’m sort of caught with one foot on the train and the other on the platform.  I can only speculate on the future of the business, but the future of academia looks strong. Many universities that began offering two-year programs now have four-year surveying degrees. Likewise, more states are requiring four-year degree programs for licensure. It’s promising to see this growth in otherwise unstable economic times.

I am excited not only about geomatics but also about joining a global community of surveyors. I look forward to working for a company with an international client base and having the opportunity to travel.  The surveying community in Europe is growing with technology and providing a good professional model for the United States. I think we will see an increasing rate of international business for surveyors in the next 20 years. I am already taking an interest in projects being performed in Portugal and South Africa.  As a surveyor, I’m learning to see the entire world as my backyard.