It seems that during my entire career as a proud professional land surveyor, surveyors have been waging an image battle. We often hear that we aren’t perceived by the public as—or paid on par with—other professionals, such as our next-of-kin, engineers, and even lawyers and doctors. I continually hear and read discussions that we aren’t even compensated as well as some of the trades, such as plumbers or electricians. Although I have never personally had much heartburn over these discussions, I can’t help but be aware of them and wonder why it’s true.

Based on my observations and opinion, the contributing factors are many: a complex, layered matrix of moving parts, some of which we control and others we allow to control us.

What We Are Not 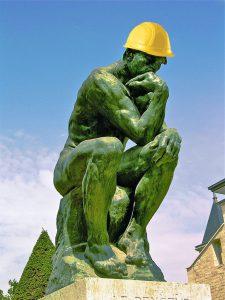 We are not engineers, doctors, or lawyers. To compare ourselves to such does a delusional disservice to our profession.

Although things have changed in the past decade or so with a national component to our licensure process, historically the educational requirements, or even opportunities, are nowhere near what they are for these other professions. For example, I obtained my license 31 years ago based on more than six years of qualifying experience, with no degree in surveying at all. The same path is still possible today in California. That is true for many other states as well, although, as I said, that has changed in many states. (Whether or not that change has been beneficial to our overall professional ranks is the subject of an entirely different discussion and will not be addressed here.)

The reality is nobody except us understands what it is we do. I have spent my professional life working with engineers who don’t understand what we do, or how we do it, but they certainly complain that whatever it is, it costs too much. If engineers don’t get it, we have little hope that anyone else will.

Almost everyone can tell you what a doctor, lawyer, or engineer does, at least in general. Ask the man on the street what a surveyor does, and you will get “I have no clue,” or, “He’s the guy standing along the side of the road looking through a telescope,” or, “He knocks on doors and asks questions.” I contend that no matter how hard we try, collectively, we will never change that. At least not very much.

Even if we could, it seems we have extreme difficulty doing anything collectively. Sure, we have great leadership at the national level working hard on our behalf. But how many surveyors are even paying attention to those efforts? I believe I have heard more negative statements about state associations electing to include national membership fees with state level fees than I have positives about the benefits of the partnership to both organizations and the profession.

We can’t even seem to get state organizations aligned with regional associations to pull on the rope together. And we can’t get state-level organizations to function cohesively. We have a Young Surveyors Network and the rest of us. What? (Again, I am speaking from personal experience and opinion, so if there are model examples out there to the contrary, I would love to hear about them.)

So, we waste time complaining about whom we’re not treated like or paid equally to. We dilute the power we have collectively by either not being involved at all or by butting heads with others who are willing to be involved but don’t see it our way. Sounds an awful lot like politics to me. We all see how well that works.

Another major contributing factor to our ongoing identity crisis has been created by technology. We were once the Kings of Location. For the most part, the only thing left that’s still protected is boundary location. Other people are locating everything from wetlands to assets to infrastructure.

Remote sensing has exploded and taken a huge portion of our traditional work with it. Automated machine guidance has eroded the once-highly-profitable construction staking sector almost to extinction. GIS has become the mapping and data-repository platform of choice across almost all industries and professions, with very little of that data having been collected by the “Kings of Location.”

Then we have the corner-cutters, moonlighters, and the unlicensed, undermining our value at every turn. You cut every penny out of your proposal, with the sharpest pencil you can find, and someone gets the job for a third of your amount. It happens every day. The playing field is as uneven as the surface of the Grand Canyon. Licensing boards have some authority to go after the unlicensed violators, but not your licensed peers, unless they clearly violate a law or rule. Proving incompetency or failing to meet minimum standards of practice can be challenging.

I suppose carpenters, plumbers, and electricians face the problem of bid undercutting, too. But my guess is that it is not so prevalent for those other “professions” we like to compare ourselves with. Does that make us more realistically a trade than a profession? I believe that has been another battle we have been fighting when competing for government-funded work where we are inappropriately (illegally?) selected on bid amounts, not on qualifications. A direct reflection of how our services are perceived.

What Is Our Future, or Are We History?

Do I have solutions for these issues? Honestly, I don’t. Except to say that I long ago accepted that part of being a professional land surveyor was educating people, especially clients, about what we do and the value we provide to the success of their project, and doing so in a confident, articulate manner. Then proving it.

And, I have worn a coat and tie while doing it. I wanted people I interacted with to think of a surveyor as something other than that guy with dirty clothes and boots on the side of the road looking through a telescope. I wanted them to see us an integral, important part of the team, not an evil necessity.

I jokingly blame the “Three Surveyors and Another Guy” for all this. But the esteemed role that land surveyors once played in the settling and development of this country—creating a lofty image in the public’s eye (how many old photos of survey crews have you seen where all members were finely dressed?)—is a long-bygone era. We cannot cling to that history, even though we are bound to retrace it. If we cannot cohesively figure out who we are, we may be just that … history.

Look for more from xyHt on the current state of surveying identity, both domestically and abroad, coming soon.