It’s been said that while good companies are satisfied with being good, great companies are continually focused on getting better. With that adage, it’s easy to see why Anderson Engineering (AE) has more than six decades of experience under its belt, has grown from a startup to more than 90 employees, and serves its customer base out of eight branches in both the Midwest and Florida.

Throughout that rich history, the company has emphasized broadening the diversity of its services and keeping abreast of evolving technology. So, a few years ago, when the use of unmanned aerial vehicles (UAV) showed potential for bettering their survey function, they became one of the region’s first engineering firms to apply for and receive approval to use that technology.

Today their introductory-level drone has been replaced with a sophisticated, professional-grade UAV that continues to impress AE’s staff with its performance and to whet their—and their clients’—appetites for new and innovative uses. 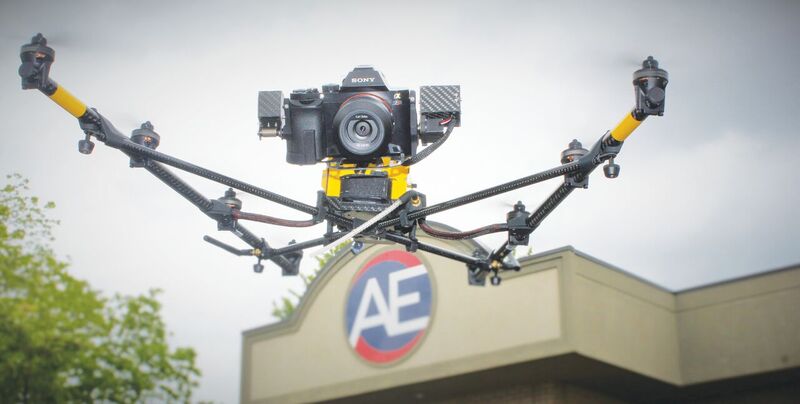 One of the two camera packages Anderson chose for its Top- con Falcon 8 UAV is the 36 MP Sony Alpha 7R DSLR camera for the firm’s inspection and photogrammetry applications.

Anderson Engineering committed to drone technology earlier in the process than most, purchas- ing their first vehicle about three and a half years ago. According to AE vice president Jerrod Hogan, while the “hobby drone,” as he calls it, showed them what was possible, it also spotlighted all the shortcomings of the technology as it existed then.

“Even though that first unit was very basic by today’s standards,” he said, “because we purchased add-ons to suit our needs, it still carried a price tag of better than $10,000. But we felt that, even if it did just a few things, we could probably break even; if it did all that we hoped it would, we could make money. That was all secondary, however, to doing a better job for our clients.”

From AE’s perspective, the drone could play a key role in two areas: photogrammetry and power line/tower inspections. The company conducted several such projects, and while it was moderately successful, the efforts spotlighted the technology’s limitations. 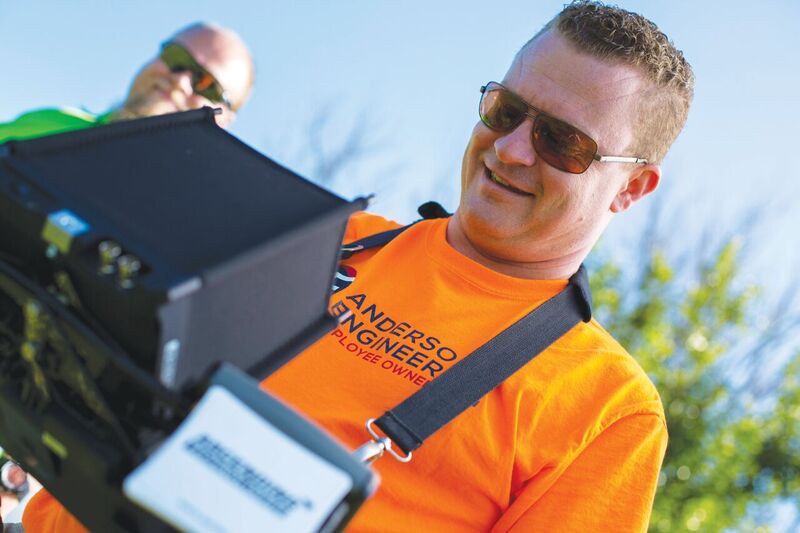 “Those shortcomings included a short battery life, problems with stability, and limitations due to wind conditions, just to name a few,” said Hogan. “In addition, it had a GoPro camera on it, and, though GoPros are amazing at what they are built for, when you put one a couple hundred feet off the ground, the fish-eye lens presents such a huge area that we couldn’t get the accuracies we needed. So, to do inspections, we had to fly extremely close, and that drone didn’t have the necessary stability for such proximity.

“Nevertheless, it was a very good introductory vehicle for us. Even though the hardware wasn’t quite what we needed, it let us know we were on the right track.”

Insurance-driven concerns, coupled with a waiting period to obtain the FAA 333 exemption previously needed to commercially operate a UAV, afforded AE the time to explore other options available to them. The extensive research conducted by Hogan and his colleagues at Anderson all pointed to the Topcon Falcon 8, powered by Intel, an eight-blade, rotary-wing UAV that offers sensors, active vibration damping, and compensating camera mounts: all features that fit with AE’s needs.

“Another of the issues we had with the first UAV during power-line inspection work was dealing with electromagnetic interference,” said Hogan. “The risk of interference with the unit’s control system meant we had to fly farther away from the lines in order to maintain control. But, because we were now farther away, we could no longer get the inspection-quality images we needed.

“When Chad came out to demo the Falcon 8 for us, I said, ‘If you can get close enough to those lines to get the images we need, I’m not letting you take that unit back with you.’”

According to Hogan, Willey did the demo, and the performance changed the way the engineering firm looked at UAVs. He said that the eight blades offered stability they never had before; battery life was greatly improved; and problems dealing with changing wind conditions became, to a large degree, a non-issue.

“Chad showed us that, if we were hovering 20 feet off a power line and the wind suddenly blew the aircraft in the direction of those lines, the Falcon 8 would instantly correct itself and stay in position. That ultra-stable platform, coupled with the images it was able to produce, sold us on the spot.” 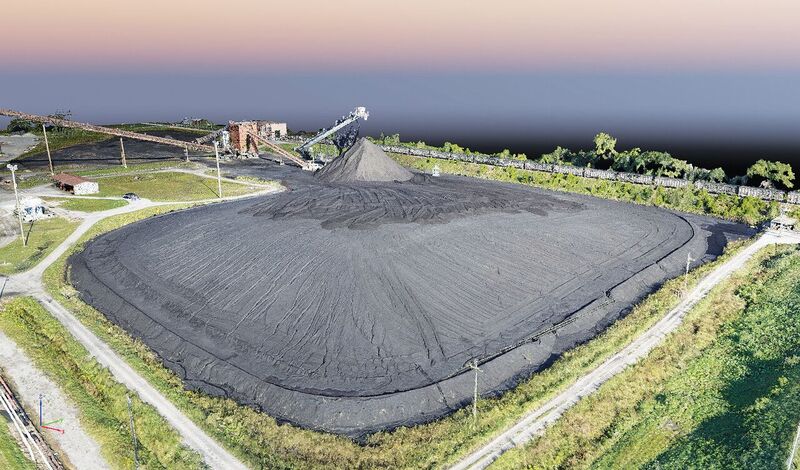 UAVs are faster and safer for tasks like quantity meas- urement and verification; this point cloud image is of a coal pile for one of Anderson’s southwest Missouri power plant clients.

In typical fashion, AE did not approach its drone upgrade halfheartedly. The firm purchased the UAV with two separate camera packages, each best suited to a particular facet of its business.

One of the camera payload packages used for inspection features a 12-megapixel Panasonic Lumix DMC-TZ71 with 30x optical zoom and an FLIR Tau 2 IR camera, which has allowed the company to augment traditional power-line inspections with an infrared capability. This combination collects both thermal and RGB images simultaneously, allowing the user to get detailed actionable information on an asset’s condition.

“On power lines, in the area where two lines are tied together, corrosion will prevent a good contact from occurring, and the line will heat up,” he said. “These hotspots are easily identified in an infrared image. Overall, the power-line inspection effort has been streamlined and made safer with the UAV.

“To inspect those traditionally, a worker is either attached to a helicopter platform or on the ground in a bucket truck. It is a labor-intensive and often risky process. Time-wise, our UAV can beat a manual inspection by a rate of about 5:1, and the safety factor is exponentially higher as well.”

The other inspection-related package AE chose includes a 36 MP Sony Alpha 7R DSLR camera that provides ultra-high resolution images: invaluable in both inspection and photogrammetry applications. Hogan said he was immediately blown away by just how powerful the zoom feature was.

“One of the first jobs we used it on was for a roofing company in town for which we flew over a parking lot,” he said. “In that lot was a pickup truck with six empty water bottles in the truck bed. I joked to the client that I could zoom in and just about read the UPC labels on those bottles—it’s that powerful.

“And so, with this purchase, we went from doing a decent job at a distance with our old drone to being able to say with confidence to the client, ‘This cotter pin is broken, or that bolt needs three turns.’ It was a game changer, for sure.” 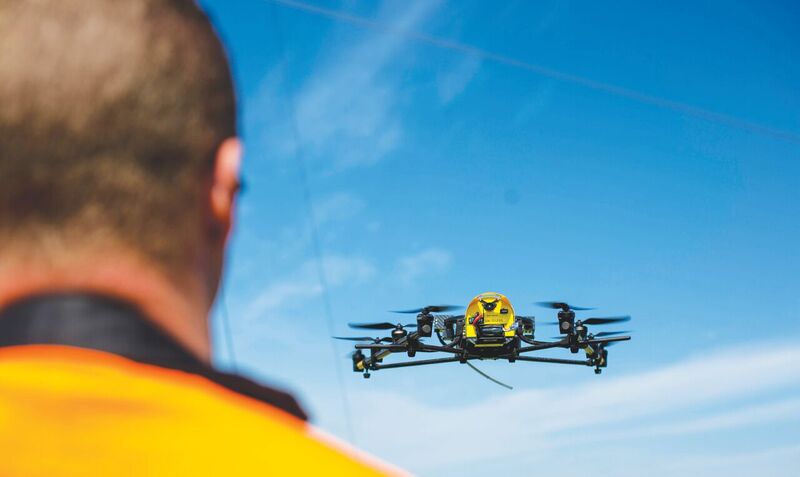 Anderson’s reliance on a high-end UAV resulted in a second purchase to meet the growing demand for its strengths.

AE has been operating the drone for well over a year now, and they have many examples of
just how impactful the solution has been to their operation, and Hogan says conducting topo surveys using the vehicle has become commonplace for them. One they recently did for the city of Cassville, Missouri stands out.

“We did about 600 acres in an area called Seven Valleys, which is prone to flooding issues,” he said. “We teamed up with another engineering firm to do flood plain modeling for the city to help them be better informed with regard to future development and better equipped to predict how flooding will impact their community.

“We first went out and set up ground targets to establish good control, flew the project with overlap, and brought all that data into Pix 4D, our mapping software. From there, we created the 3D model to accompany the orthophoto of the project area. The results were impressive, and, most importantly, the client was very pleased.”

Hogan added that preparation for any UAV flight is made far simpler through the use of AscTec Navigator flight planning software. Their previous drone took a picture every two seconds, forcing them to have to set the focal distance on the camera; consider the field of view, altitude, etc.; then go back to the map and begin calculations.

“We basically had to draw the whole flight plan out by hand,” he said. “With the Topcon solution, once we draw all the necessary boundaries around the job, we tell it what kind of overlap we want—both front and back, as well as side to side—tell it the degree of accuracy we need, and it sets our flight altitude above ground.

“Then, the pilot makes certain that the altitude selected is high enough to clear any obstructions such as trees, power poles, towers, etc., that might be in the flight path. From there it calculates the full flight plan, tells the drone to fly to a particular location, and, using lines and pre-determined waypoints, begins gathering data at each waypoint. It’s an amazing solution.”

One of the obvious benefits of a UAV to a company like Anderson Engineering is its ability to perform tasks in situations that are considered risky for workers. On a project involving a sinkhole that had opened up in nearby Springfield, that benefit played out in a huge way.

Part of that evaluation process often involved lowering a worker into the sinkhole to take photos of the surrounding environment: effective, but an obvious safety risk. In that case, the engineer lowered into the hole would take rough measurements from a distance, and, using that, AE’s team would calculate how much concrete, rip rap, soil, etc., would be needed. Because their findings were based on an estimate, the contractor generally would have to add “fluff” to his quote to cover any unforeseen situations.

“However, armed with the UAV, it became an entirely different approach,” said Hogan. “We wanted the maximum resolution possible from the camera, so we were at about 75 feet which gave us a really tight Ground Sample Distance—the distance between pixels as shown on the ground.

“We first flew a top-down view, both to get the whole project georeferenced with our ground targets and to get a good view of the hole itself. Then, we slowly descended into the hole to gather our oblique images. The platform was unbelievably stable.

“I was initially worried about the GNSS signal strength as the aircraft went farther down the hole, and, though the signal did degrade a bit at its lowest point, never was I worried about losing control of the UAV.

“I lowered the drone down, rotated it, got the images we needed and brought it back up. Then we used Pix4D to generate a highly accurate, georeferenced model. The results were far more accurate than before, any worker was removed from harm’s way, and again the client was better served.”

Hogan said that the aircraft had been in such demand that it re- cently became obvious that a second UAV was needed. Though they considered testing alternative makes and models, he said looking elsewhere became a moot point.

“Even from a purely economic standpoint, it’s tough to argue with a one-year ROI.”

He continued, “It’s possible that I will look back a year from now and say, ‘Something that wasn’t even a consideration back then is now half of our drone business.’ I think that’s pretty cool.”

To read more from this print edition, click on the cover below. 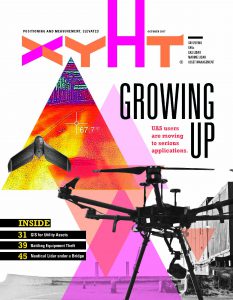