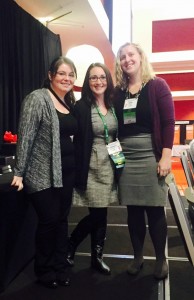 The URISA Vanguard cabinet honors their Young Professional of the Year for 2015: Wendy Peloquin

URISA is one of the most influential professional associations serving the geospatial information communities. Formed in 1966 (long before the advent of modern GIS), the focus was to bring together professionals working towards improvements in urban and regional planning. As geographic information moved into the digital age, URISA has been a leader in fostering education, development of standards, and open sharing of best practices, ideas, and innovation. As modern geoinformation has now spanned several decades, concerns of succession planning have brought about the formation of the “VC.”

The URISA Vanguard Cabinet is an advisory board made up of young geo-professionals, mostly under 35. The group has representatives from around the country who meet to explore outreach and networking opportunities for the next wave of geospatial leadership. Each year a half dozen board members are selected from among applicants by a steering committee to work on initiatives for education outreach that have included mentoring, student competitions, and selection of the annual URISA Young Professional of the Year (the 2015 honoree, Wendy Peloquin in the adjacent photo – center).