Hydrographic Surveyor at Tideway, part of the DEME Group – France 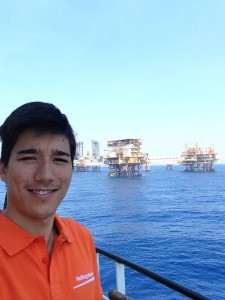 Two of the key drivers for hydrographic surveying are in energy: both fossil fuels and a boom in alternate energy sources, particularly offshore wind. These activities are popping up all over the globe, and a new wave of young and eager hydro surveyors are globe trotters—and globally educated—utilizing tech solutions both new and old. Vincent Bernard is a prime example of this new wave.

Bernard grew up in Tahiti, French Polynesia and moved to France for an engineering degree, which he earned from ENSTA Bretagne. With a year as an exchange student in Hamburg, Germany, he earned a Master 1 of Geomatics with a specialization in hydrography.

His first project with Tideway was windmill protection in the Irish Sea, Gwynt y Môr. He was in charge of the surveying and mapping seabed and checked if the rock protection around the windfarm monopoles were properly placed and that desired quantities were met. He next worked in the Gulf of Mexico on the ship The Rollingstone for pipeline inspection and protection.

Recently, Bernard worked in Egypt on a dredging project in the New Suez Canal. He was in charge of doing the survey and providing real-time data on the status of work in the canal. He also worked with data from the survey vessel in the office.

Now Bernard is back on the Rollingstone in the Gulf of Mexico working on pipeline protection and preparation for pipe laying. Bernard enjoys participating in all kinds of sports, especially swimming, climbing, and skiing, and he enjoys the travel his work affords him.