This entry is part 6 of 8 in the series xyHt in print May 2015
Above: Ambassador Peter Thomson, Fiji’s permanent representative to the United Nations, presents to the General Assembly the resolution titled, “A global geodetic reference frame for sustainable development.”

The United Nations takes up the call to develop a global geodetic reference frame for sustainable international relief and development.

Geospatial technologies that have quickly become commonplace and essential in industrialized countries can be enormously helpful in developing countries, as well. Crucial applications include economic development, monitoring climate change, disaster relief, emergency response, and precision agriculture. The United Nations has increasingly recognized the importance of geospatial technologies in these roles and especially that of one of their foundational elements, a global geodetic reference frame.

In July 2011, the UN’s Economic and Social Council (ECOSOC) established the Committee of Experts on Global Geospatial Information Management. This committee is charged with the responsibility to devise “a global geodetic road map” to address key elements relating to the development and sustainability of the global geodetic reference frame.

In February 2015, the committee tabled a resolution, sponsored by 43 of ECOSOC’s 54 member states, titled, “A global geodetic reference frame for sustainable development.” The resolution calls on all UN member states to

The resolution talks about the need for “building capacity and sharing of data from ground-based observations, satellite remote sensing, and other sources” and the need to “improve the sustainability and capability of the Global Geodetic Observing System.” It also references the need to “encourage and support the adoption of the International Terrestrial Reference Frame as the foundation reference frame” and the importance of “space-technology-based data, in situ monitoring, and reliable geospatial information for sustainable development policymaking, programming, and project operations.”

It recognizes “the economic and scientific importance of and the growing demand for an accurate and stable global geodetic reference frame for the Earth that allows the interrelationship of measurements taken anywhere on the Earth and in space, combining geometric positioning and gravity field-related observations.” 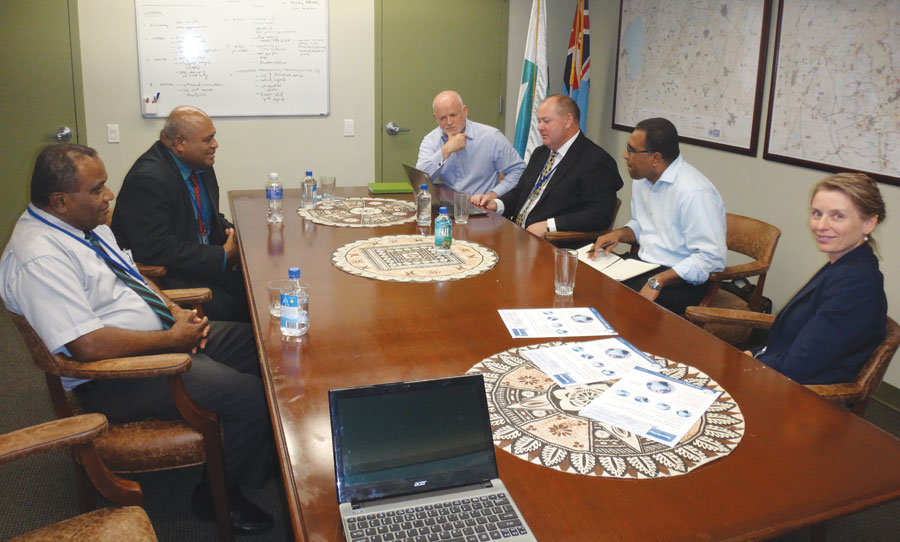 Ambassador Thomson and members of the Committee of Experts (Australia and Norway) discuss the resolution. Credit: the Permanent Mission of Fiji to the United Nations.

I discussed the resolution’s genesis and implications with Peni Suveinakama, second secretary of the Permanent Mission of Fiji to the United Nations, who led the negotiations on the resolution.

“The idea of having a resolution,” he tells me, “was conceived after the committee of experts commenced substantive work on a common blueprint on geodesy in August of last year. The committee put forth the resolution, which ECOSOC adopted in November of last year.” This began generating a lot of momentum. Realizing the need for consensus on global geospatial issues, the committee approached Fiji, one its member states, to shepherd the resolution from ECOSOC to the General Assembly, which is made up of all 193 UN member states.

In introducing the resolution to the General Assembly, the permanent representative of Fiji to the United Nations, ambassador Peter Thomson, said that, “Fiji, along with many other small island developing states, is vulnerable to the severity of natural disasters common to the region, including flooding, drought, hurricanes, and sea-level rise. As a member of the UN Committee of Experts on Global Geospatial Information Management, we fully realize the importance of such critical infrastructure and information in order to help countries and policy and decision makers make more informed, evidence-based decisions on policy planning.”

Fiji, Suveinakama explains, hopes that the resolution could help mainly with geospatial capacity-building for developing countries and lead to greater international standardization for geospatial data. “We should seriously look into data interoperability,” he says. “Countries like Norway or Canada will not be able to use the data being collected by countries from our region simply because it is in different formats and reporting systems,” he says.

Data for Disasters and Peacekeeping

Fiji also hopes that the resolution would help reap the benefits of geodetic information for disaster reduction preparations and climate change mitigation. “Climate change is a very big issue that we are currently facing in the Pacific and is resulting in extreme weather conditions,” he says. “Cyclone Pam, which hit several countries in the Pacific two weeks ago, affected more than 90% of the population in Vanuatu. We believe that geodetic information will help national planners and townships prepare for this sort of extreme natural catastrophe.” At the United Nations, he points out, all countries are now recognizing the usefulness of geodetic information for disaster preparedness.

Some countries, including Fiji, have an additional reason for caring about geospatial data: their involvement in UN “blue helmet” peacekeeping operations around the world. “The international community is now waiting for a road map to help us move forward on this geospatial work,” Suveinakama says, adding that the endorsement of the General Assembly will place much greater emphasis on the important mandate placed on the committee of experts.

One significant challenge in achieving a broad consensus on the resolution was its call on member states to “implement open sharing” of geodetic data. On this issue, according to Suveinakama, most of the countries became protective, despite the fact that the secretariat clarified that this critical information was not to be misconstrued as confidential data for domestic use only. However, in the end, on February 26 the General Assembly adopted the resolution by consensus.

Most diplomats are not conversant in geodesy and geospatial technologies. After his first briefing on the subject, Suveinakama recalls, he told colleagues, “I was talking to people about this issue but had no idea myself what the issue was or what geodesy was in the technical sense.” To help generate momentum through better understanding on the matter, he used examples, such as the fact that the 2011 earthquake in Japan caused some major geological shifts in continents.

Suveinakama was grateful to the committee of experts and the secretariat of the UN Department of Economic and Social Affairs for the support and guidance they gave him throughout this process.

“Some countries have very good national geodetic infrastructures, some countries don’t,” Suveinakama concludes. “For countries that don’t, this resolution could be a starting point. Now they can appeal to relevant stakeholders, including to governments and the private sector, on what was agreed to in the General Assembly and we need to start working on it.”