With a set of eyes that had focused on survey lines through several eras, the Old Man (Glenny Dale, also known as Glutton), took one look at the cluster of three monuments along a right-of-way fence line. The site of three pins at a point where there could be only one legal property corner did not surprise the Old Man; the spectacle didn’t even make him blink. It took just one look for him to compute the history of the scene.

Eager, the Kid (also known as Igor Kidinsky), was puzzled by what he saw.

“This doesn’t make sense! Our survey is going straight to the lawyers!” he whined, as if scolding the pins themselves. “Now we have legal problems from our first step.”

Both surveyors beheld the debacle before them: 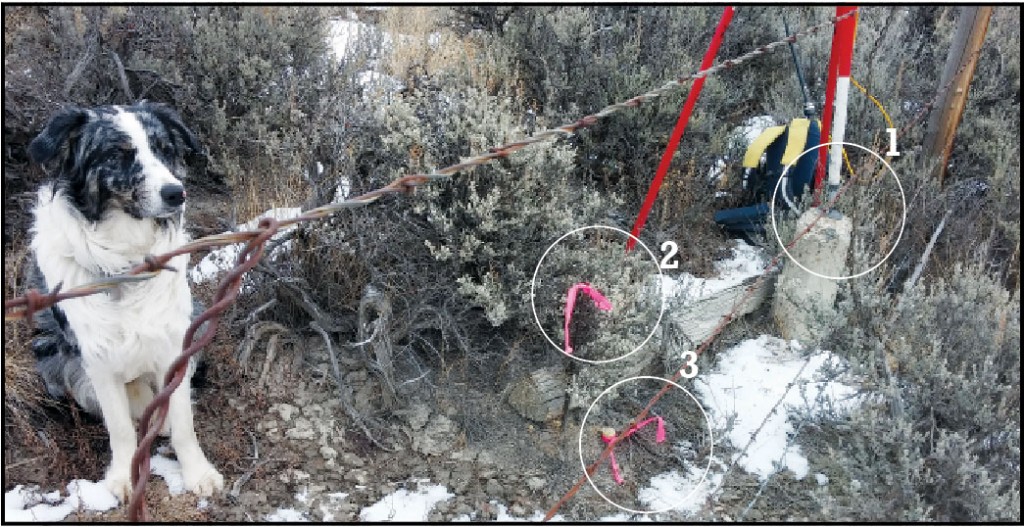 They were attempting to retrace a stone section line, established in 1882, where it intersected the 1932 right-of-way line.

The 1932 right-of-way plat referenced the section line and that this point was the Point of Curve.

The 1969 subdivision plat noted the stone section corner and that this rebar was “set” at the intersection of the section line with the point of curve.

The 2004 GPS survey noted the stone section line and that both pins were “off” the true intersection, where this pin was set, finally, in a precise position. The math of the right of way had been meticulously recalculated between two “good” right of way monuments found far away.

It was cold, gray, and cloudy. The only form of wildlife to be seen was a perched crow, laughing at the spectacle of two surveyors looking at three monuments.

Eager’s mind focused for a few moments until he saw a theory. He let out a laugh, which sounded just like the watching crow.

“These two pins are so close together that the 1969 and the 2004 surveyors almost totally agree, and that is with vastly different instruments. It’s obvious that the 1969 surveyor did a very good job of tracing this section line,” concluded the Kid.

He continued, “The 1932 road crew made a blunder with this brass cap. We can’t follow it when it’s outnumbered two to one.”

The Old Man spoke: “I’ve worked on road crews long ago. It was hard work. The men who built this road followed the survey crews, who led them through these rugged mountains. They were often the first surveyors to recover these stone corners, and they had to look far and wide for some of them, while at the same time blazing trail and keeping ahead of the relentless construction crews.

“Without these highway surveyors, nothing got built. Transportation in America stopped. These road surveyors did a great job, and they deserve as much credit for the building of America as the original pathfinders, such as John C. Fremont.”

The Old Man continued with his epistle, hoping Eager wanted to know more about Fremont.

“Captain John C. Fremont seized what is now the state of California during the Mexican-American War. He became its first governor, then its first senator. He was the first Republican to run for President.

“General John C. Fremont, as commander of the west, issued orders to U.S. Grant in Missouri. He ordered the emancipation of all slaves in Missouri, months before Abe Lincoln could make it official. He also commanded armies in Virginia and Tennessee during the Civil War.

“Despite these great accomplishments, he was instead known and loved by America as ‘The Pathfinder.’ As a surveyor, he found a route to the west in Wyoming, near a 13er named after him by Congress. He discovered that the Sangre De Cristo Mountains in Colorado were not the way for the railroad. His discovery was near a county later named in his honor, and there are three other states that have Fremont counties. Three of his survey expeditions included Kit Carson. His surveys, maps, and personal accounts of the Missouri River, Columbia River, Snake River, and Oregon Trail are American masterpieces, which effectively lured countless numbers of settlers across the West to the Pacific Ocean.”

The Old Man then offered a few hints. “There is no specific law that requires retracing surveyors to change a monumented section line by making it straighter. Surveyors serve no useful purpose when they run a new, straighter line that disagrees with established property rights. In fact, this practice usually causes unnecessary legal problems for landowners and is sometimes outright illegal.

“Always, this practice of setting multiple monuments drags this profession backward, not forward.”

Eager (The Kid), listened carefully. Even the crow stopped laughing as he responded. “It’s true that since 1932, there has been no problem identifying this huge right-of-way monument. The amount of work required to cut this road, find the section corner, then place this monument, with transit and chain, through uncut, rugged territory, far exceeds that of later surveyors with GPS who have the gall to inform us that their measurement of a straight line is a bit more perfect than the trail blazers of 70 years earlier. In 1932, society needed this road, and this here monument has served its purpose well!

“I’m proud to follow the great work of these 1932 pathfinders,” the Kid cried, pointing to the brass cap.

“You have great vision, young man,” said the Old Man with a congratulatory slap on the shoulder, as a ray of sunshine cracked through the clouds.