Above: Isometric view of 3D model of centralized benches, barbeques, and gazebos at Prescott National Forest.

The Prescott National Forest (PNF) is a 1.25-million acre United States National Forest located in north central Arizona, with more than 20 developed recreation sites and an estimated 800,000 visitors each year. 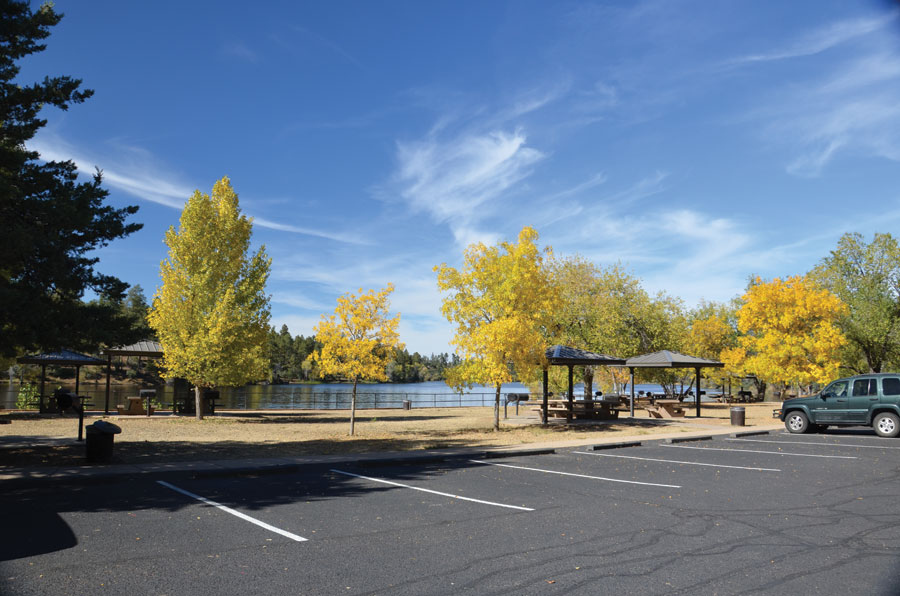 The south shore of Lynx Lake in Prescott National Forest has a mix of conditions for scanning.

This high user demand leads to the need for much change in the recreational sites, such as improvement, expansion, and modernization of many popular campgrounds, trailheads, and other day-use sites. Yet, Forest Service personnel developing these improvements face a lack of relatable, as-built plans.  Many improvements have been conducted in a piecemeal fashion due to budget constraints or planning approaches.  This has led to a large number of data sets that have used different, random coordinate systems and vertical datums or benchmarks.

The PNF wanted a full dataset that could be used for design purposes, so they teamed with Azimetry, a geospatial provider based in Bellevue, Washington (where we work), to test the capabilities and applicability of using lidar technology for this.

Many of the common recreational sites in the PNF have a mix of modern amenities such as pavilions, picnic areas, and restrooms and are surrounded by forests of ponderosa pine, manzanita, and other vegetation.  In addition to a challenging viewshed, the site has varied and mixed terrain, all in a compact space.  Due to the often-mild climate, there are users at many sites 365 days a year.  This combination makes efficient, low-impact data collection highly desirable.

Isometric view of Lynx Lake south shore DTM with 1 foot contours (all other features have been removed.)

For this project we selected the south shore of the Lynx Lake recreational site just outside of Prescott.  The PNF originally proposed two sites: south shore and the Lower Wolf Creek campground. Because Lower Wolf Creek campground has a dense canopy, we had concerns about attaining the necessary GPS lock (and having to deal with multipathing  errors) to facilitate mapping.  Though this was not a deal-breaker with the technology, it did make the project more difficult even with the onboard IMU.  Lynx Lake was ideal because of the large amount of assets to map and an open tree canopy. It provided an excellent mix of the conditions that a surveying and geospatial firm would be challenged with logistically.

An overhead view of lidar data with planimetric overlay.

In late spring of 2014, Azimetry enlisted the Phoenix office of WHPacific to complete the scan, which turned out to be an extremely successful process.  In less than a day, WHPacific collected data using an Optech Lynx Mobile Mapper with a high enough resolution to develop plan-quality data.  Because of the speed of the lidar collection, there was low impact on the day use of the site.  In fact, some members of the public were interested in the collection, and WHPacific was kind enough to speak with them about the process.

Upon completion of the Lynx Lake south shore lidar scan, WHPacific submitted to Azimetry a geo-referenced point cloud to begin the data-extraction process. The first step to data extraction was a firm establishment of relevant data needed for extraction. After working closely with the PNF, Azimetry concluded that a broad as-built analysis of the area would be the best approach.

Upon completion of the planimetric stage of the data extraction, Azimetry initiated classification of the point cloud data.  Classification consists of defining very specific portions of the actual point cloud, for example: a scan of a boulder and the lidar returns that comprise the boulder can be called out as any identifiable trait (such as boulder, rock, permanent object, etc.).  Thus, the points that encompass the boulder are classified as “boulder,” while other features are classified respectively in this fashion.  Classification of point cloud data helps isolate the data into categories and allows the data to be more manageable. 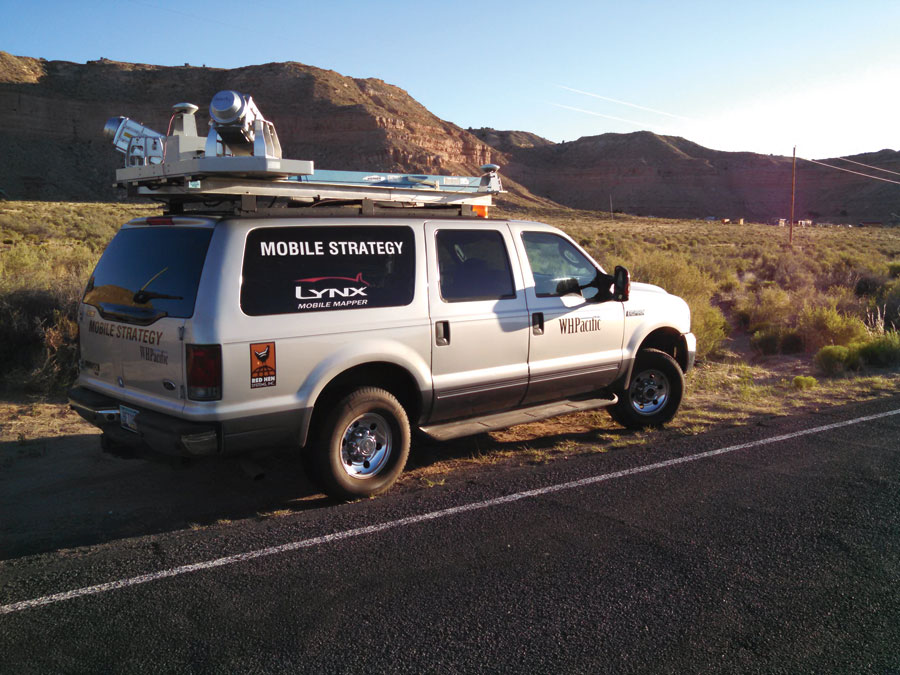 Azimetry took an additional step to create 3D models of some of the centralized benches, barbeques, and gazebos surrounding the boat launch area. 3D modeling is essentially the mathematical depiction of a 3D surface of an object.  Because lidar is basically a multitude of X, Y, and Z coordinates, this opens it up to many 3D modeling opportunities, including but not limited to engineering, graphic design, rendering, etc.  Modeling allows for a crisp and concise understanding of the item being interpreted and has become an industry standard in design and engineering.  Inspirationally, the advent of the 3D printer has allowed models to be realized outside of the computer screen, so you can actually print the object you scanned.

Finally, lidar is a perfect platform to employ the appropriately named triangulated irregular network, or TIN.  A TIN is a digital data structure used in computer-aided drafting for the representation of any surface.  This methodology is used in the creation of a digital terrain model, or DTM, a topographic model of the bare earth (terrain relief) and a common deliverable created from lidar data.  Azimetry created a DTM of the surrounding area and overlaid it with 1 foot contours.

Taking into consideration the sensitivity of sites like Lynx Lake in conjunction with the expansive data needs for the area, lidar was clearly the preferred data collection choice for this project.  Older methods for data collection (such as total stations and RTK GPS) would have taken many days to collect the necessary data and would have yielded only a fraction of the information.  Also, lidar opens itself up to a “data cross use” element; the deliverable data to the Prescott National Forest is not necessarily limited to as-built and elevation information. Because of the high data density of the lidar scan, the PNF can use the same point cloud for applications such as volumetric analysis, forest biomass (in immediate vicinity), cursory engineering data, etc., without having to revisit the site for additional data collection.

Ultimately, WHPacific was able to complete a high-definition survey of the entire Lynx Lake boat launch area (south shore) with a one-man crew and in one afternoon. To complement that cost-effective approach, Azimetry completed a deliverable package of: classified lidar data, a DGN with vectorized features, DTM, contours (1ft), and a GIS database of vectorized features. Post processing was completed by two drafting associates over the course of three business days.

With variables such as site sensitivity, possible safely concerns, and budgetary constraints, the usefulness of lidar becomes abundantly clear.