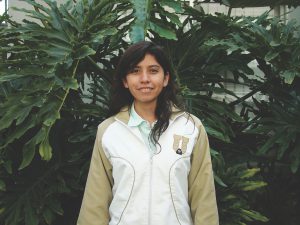 María Tai’s nominators characterize her as modest as she walks from her research office at the Atmospheric Sciences Institute to the engineering department at UNAM (to teach GIS, numerical and mathematical modeling, and geodesy), but they say that behind her demeanor is a great scholar and researcher known as “Master Tai” by her students.

One of Tai’s significant contributions happened after the earthquake in September when many of Mexico City’s buildings suffered structural collapse. Tai was in charge of coordinating the topographic work for constant monitoring of at-risk columns that still held weight. Her work helped rescue victims and prevent deaths, and she included her students in this constant and committed work for their society.

With a master’s degree in earth sciences in ocean-atmosphere interaction, Tai’s achievements have contributed enormously to updating and automating limnological systems (the study of inland waters as ecological systems interacting with their drainage basins and the atmosphere) at UNAM. As a student she received the highest award as the most outstanding engineering student in Mexico.

Tai’s research has included implementing the Weather Research Forecasting Model and developing GIS with meteorological and oceanic forecast data for many regions and for oil spill reconstructions. She participates in conferences and has earned scholarships and awards too numerous to list. Above all, Tai is known for being a person with great common sense.