SPL collects massive data from the air, uses less power, and can see through semi-porous objects with green lasers.

Technological advances in our industry have truly been a sight to behold. It seems like when you blink, already there’s a faster, smaller version of the instrument you just bought. Look at aerial lidar, for instance–who would have thought that data collected by a moving airplane, way up in the sky, could rival ground-based data in accuracy and density? Ten years ago you would have been laughed out of the peanut gallery for mentioning the idea.

Here I describe a brilliant new way of collecting massive amounts of data with a new method that differs from legacy linear and Geiger methods and is widely viewed as a significant advance.

Back in the Day

My first laser scanner was a Leica HDS3000, and it was pretty cool! It was the reason I got into laser scanning in the first place 12 years ago. I loved watching that green laser zip up the side of a building or across an empty parking lot.

On a good day I could get about 10 scan locations in. The setup process was pretty tedious and lengthy: it was about 15 minutes from the time you booted up the scanner to when you could actually begin scanning. Once the scanning began, the internal mirror would reflect the laser out, starting down below it at its feet, then lift it vertically from there. Once that line was done, it would shift the laser over slightly, then, once again starting at its feet, lift the laser vertically. It would slowly spin clockwise until it had mapped everything you asked it to. Power down, move to the next location, rinse, and repeat.

As technology got better, we started upgrading our laser scanners. Each scanner iteration brought a boost in efficiency. The laser could spin faster and collect many more points per second. You no longer needed an external power source or laptop.

Nowadays, you don’t really even need control targets, thanks to powerful software upgrades using cloud-to-cloud registration. I can easily get in more than 100 scanning locations in one day. It has been so much fun witnessing the progression of terrestrial lidar.

Aerial lidar, on the other hand, has always been kind of a specialty product. Its cost and limitations made it appealing only for large-scale, often remote projects.

The technology behind aerial lidar has improved, but it’s nothing like we’ve seen in our little ground units, at least nothing on the commercial level. So, imagine my excitement when I first heard about a new high-density lidar technology called single photon lidar, by the company Sigma Space, which could detect individual photons and could shoot through water!

What Is Aerial Lidar?

Much of the following information is from Ron Roth, Leica Geosystems SPL product manager.  Simply put, aerial lidar is 3D mapping that’s done in the sky, usually from an airplane. For typical linear-mode lidar, a laser is emitted, then timed for how long it takes to bounce off something and return. The laser is emitted as a single beam and needs to be powerful enough for a photo-detector to pick up its reflection, usually off not-very-reflective objects like tree bark. Because of the power needed to blast that laser, it requires a bunch of energy as well as heat dissipation. 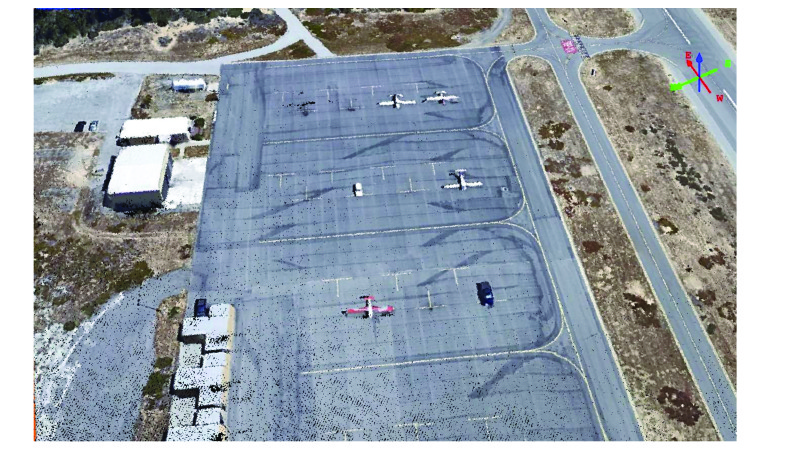 This image of an airport in MD was created with SPL data and colored with imagery.

What Is Single Photon Lidar?

Photon-counting techniques have been used for decades by Sigma Space, NASA, and others, mainly with satellites, in an effort to measure atmospheric particles such as water, aerosols, volcanic ash, as well as wind.

The technology is gaining acceptance for large-area regional and national-scale mapping projects, such as the USGS 3DEP program that is mapping the entire United States in eight years using lidar.

Single-photon lidar, or SPL, is like linear-mode lidar but cranked up a notch. The way it works is actually pretty cool. The scanning head is mounted looking down out of the bottom of an airplane. A laser emitter gets cocked at an angle between 10 to 30 degrees. The scanner then spins around in a circle, shooting the beam out in an upside-down ice-cream-cone shape. The reason for the angle and shape is to be able to see along the sides of objects; in just two passes you can scan all four sides of a building. 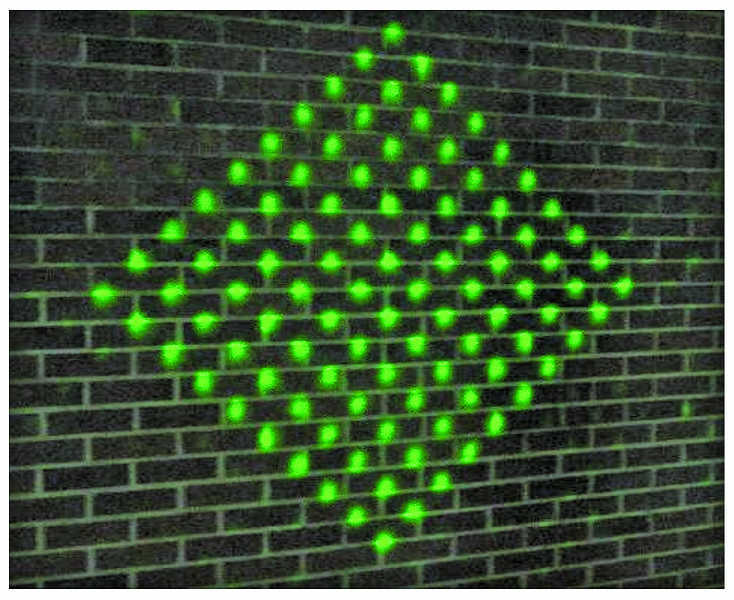 In SPL, the laser pulse is distributed through a holographic optical element to produce 100 individual beamlets.

The beam starts out by going through a splitter that divides it into a 10-by-10 grid of 100 separate beamlets. The beamlet pattern blasts out, pulsing through the air 60,000 times each second. With 100 of those beamlets, that’s a total of 6 million data points per second!

Each beamlet pulse is anticipated by separate photo-detectors that begin counting like stopwatches as soon as the beamlets leave. The detectors are so sensitive that they can detect if only one single photon of the beamlet returns, and they can determine how long each photonÕs round trip took to an accuracy within about 20 picoseconds, or twenty-trillionths a second.

The detectors continue to wait for a certain amount of time and gather multiple returns of that same pulse, because the beamlet is large enough (almost 1′ wide) to touch multiple surfaces at once. By doing this, it’s able to detect the canopy, branches, bushes, and ground all in one single pulse. Data points are recorded based on the time it took the beamlet pulse to return, meaning the longer the beamlet takes to travel to the ground then reflect off something, the farther away it must be.

In just two passes you can scan all four sides of a building.

A huge benefit to SPL is that, because the photosensing detectors are so sensitive, not as much energy is needed, which cuts way back on the power consumption as well as the heat. Sigma Space’s (the company that developed SPL for aerospace and then for the commercial industry; see sidebar) SPL system uses a visible green laser with a wavelength of 532 nanometers as opposed to the 1024nm near-infrared beam used by many traditional lidar units. The main determining factor of using this color is that the highly-sensitive detectors appropriate for single-photon detection typically have peak sensitivity in the visible wavelength range, close to the color green. Pulsed lasers producing green 532nm light are readily available, too, so that makes production cheaper.

One of the benefits of the green laser is its unique ability to see through semi-porous objects such as clouds, fog, vegetation, and even water up to about 40 feet deep. Its bathymetric abilities are only a side bonus for now, though, as specific design efforts towards that application have not yet been undertaken.

So, how much can it gather in a day? Generally, the airplane flies at 12,500 feet above the ground at 230 miles per hour. If the laser emitter is set to the standard 40 degrees, the width of the scanning swath on the ground is almost 2 miles wide!

The 10-by-10 grid of beamlets is about 16.5′ by 16.5′ on the ground. Each beamlet is 1.5′ apart. Because the airplane is moving forward and the scanner is spinning around in a circle, the grid comes back around and places the next grid just 4′ ahead of the last one, causing it to overlap the grid from that last pass. That’s some pretty dense point spacing for a plane flying more than two miles up. Using overlapping passes, the SPL system could map over 300 square miles per hour. That means it could map all of Switzerland in less than a week. 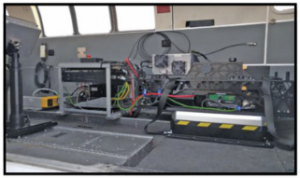 The SPL can be mounted on any small aircraft.

When the scanner begins to record data, it gathers more than just the point information. The scanner’s vertical angle is recorded as well as its horizontal position as it spins around in a circle. The horizontal and vertical position of the aircraft is tracked by GNSS. The plane’s pitch, yaw, roll, and acceleration are all monitored and recorded by an IMU (Inertial Measurement Unit) sensor that will adjust the data depending on changes in the plane’s orientation. Position correction data from either a ground GNSS reference station or PPP (precise ephemeris) is also collected and applied to the data as needed. All this data is typically compiled at 1/200-second intervals. A camera can be used to provide color information that can be overlaid on the point data to achieve a true-color point cloud.

One downside of detecting light is that, while mapping during the daytime, light from the sun can make it into the detectors, causing false readings. This solar noise can be dealt with optically through filters on the scanner as well as digitally in the software. Random light from the sun can be distinguished as noise by looking for random points that do not fall in the generally consistent patterns received by the laser reflecting off hard objects on the ground. Light bouncing off the ground returns more or less at the same time, making it easy to pick out random points. The solar noise is also less dense than a typical pulse return.

When flying, good visibility is definitely desired, although exceptions can be made. SPL systems have proven the ability to be able to “see” through limited amounts of fog and haze. This ability gives the operators a greater window of time because they do not need to wait for the ground fog to completely burn off. The height and speed of the aircraft is determined by the point-cloud density required for each project. The slower and lower the plane, the denser the points will be.

The data can be collected between 10,000′ and 13,000′ above the ground. The SPL unit can be mounted on any small aircraft like the Cessna 206, but due to the altitude that can be achieved, a larger pressurized plane such as the King Air A90 is better for the comfort of the crew.

The collected data is exported as the industry-standard LAS format, which can then be imported into point-cloud software where it can be classified and utilized.

Sigma Space (headquartered near Washington, D.C) has been in operation since 1998, developing aerospace optical instruments and providing design and integration support to NASA and other government agencies.

Single-photon range measurement is a core technology of Sigma Space, developed originally to measure the range from the ground to satellites orbiting above the Earth. This technology was eventually combined with scanning and position/orientation measurement subsystems to create airborne mapping systems.

Hexagon acquired Sigma Space in February 2016, and Hexagon Geosystems have since migrated their efforts toward full commercialization of an SPL-based sensor system and workflow to support the announced Hexagon Elevation Program (HxEP). In a similar business model to the Hexagon Imagery Program (HxIP), technology from Sigma Space will enable Hexagon to extend its content program beyond its precision imagery available on the HxIP steaming service with subscription license options. The HxEP extension will offer the market precision elevation data for large areas using licensing options similar to HxIP for customers.

Sigma Space continues to support and innovate SPL-based systems and solutions in the core government business in parallel with the commercial HxEP business.