As commercial drones begin to fill our airspace, Switzerland is figuring out how the skies will remain friendly

By 2035 more than 19,000 commercial drones per hour will be flying over urban cities the size of Paris, sharing the skies with commercial airplanes, helicopters, and other general aviation aircraft. This will amount to tens of millions of drones flying in commercial airspace each day. With most airports using the same VHF radio technology that was being used in WWII, the need for a global, network-based traffic management system has never been greater. 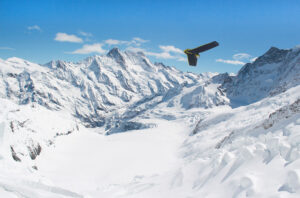 A senseFly drone soars through the Swiss Alps. Credit: Commercial UAV News & sensefly™ At top: A drone flies over Lugano, Switzerland, in the Alps near the border with Italy with the glacial Lago di Lugano in the background.

In Switzerland, it’s already happening. Commercial drone flights have been op­erational over cities since 2017, when the Swiss civil aviation authority granted the world’s first authorization for unmanned vehicles to fly beyond visual line of sight (BVLOS) over a city in controlled airspace.

Today, Switzerland remains a leader in the development of nearly every aspect of UAV operations, standards, and technologies.

For U.S. companies looking to expand or expedite their UAV and UAS product development, research, and testing, Switzerland offers unparalleled opportunities in a thriving environment of innovation with limited tolerance for red tape and bureaucracy.

A declaration of intent between Switzerland’s Federal Office of Civil Aviation (FOCA) and the United States Federal Aviation Administration (FAA) was announced in July 2020 to further develop standards and measures for integrating commercial drones into shared airspace. The coopera­tion will allow valuable steps forward such as implementing remote identification, enabling a UAS in flight to provide identification information
that can be received by other parties.

This capability will help to increase the effectiveness of airspace control, oversight, and law enforcement, therefore improving the safety of UAS operations.

This partnership — in concert with innovative, established companies and groundbreaking startups — is helping to build a real-world environment in national airspace for military and civil­ian UAV and UAS development and the creation of an “Open Skies” ecosystem that will foster innovation while ensuring public safety.

There has never been a time when it made more sense for U.S. companies in the UAV and UAS industry to consider Switzerland as their drone playground where they have more freedom than any other country to develop, test, and bring their products to the global market.

“We have the mandate to foster innovation while ensuring public safe­ty by implementing a comprehensive strategy to position Switzerland at the forefront of disruptive trends,” says Marcel Kägi, manager of the Innovation and Digitalization Unit and head of strategy for the Federal Office of Civil Aviation (FOCA) in Switzerland.

Why do global companies flock to Switzerland to test and develop UAV technology? One of the driving forces is the country’s Specific Operations Risk Assessment (SORA). The Swiss approach is purely outcome- and risk-based, non-prescriptive, and constantly evolving. FOCA’s Innovation and Digitalization (ID) unit has created regulations for the UAV/UAS industry, where none previously existed, with this approach.

He continued, “It’s also risk-based, which means that the requirements are easy to fulfill if the risk of an operation is low, like not flying over a city with lots of people or with a heavy drone — we want them to access the skies at the lowest cost and with the least amount of red tape.”

Switzerland, a small country with a modest authority, has developed tremendous influence and stature through its strategic alliances that drive the space, aviation, and drone industries.

Through its public-private partnership, Swiss U-Space Implementation (SUSI), Switzerland has developed a platform to ensure transparency and inclusiveness in the way drones can access airspace, working toward a set of decentralized services created to integrate drones in the airspace and to enable them to operate together with manned aircraft.

Users of U-Space are not required to be a part of SUSI, but the platform has attracted a body of industry luminaries such as Airbus, Swisscom, Microsoft, and a bevy of emerging players such as Matternet, INVOLI, and Drone Harmony, among others.

The sheer scope of global companies participating in SUSI is a testament to its viability and importance for the future of the UAV and UAS industries.

A commitment to cooperation through alliances

Switzerland is active in all international bodies expanding and regulating the drone industry. These relationships, along with the strong relationships between Switzerland’s government, universities, and institutes with counterparts worldwide, ensure that businesses that leverage Switzerland to expand or expedite their UAV or UAS ventures will have access to the entire drone ecosystem as they enter the process of commercialization.

FOCA is Driving a Digital Infrastructure

While Switzerland has been successful with pilot implementations of UAVs in limited operations, such as delivering blood samples to labs, it was recognized that more work needed to be done in order to scale for safe, widespread UAV travel.

To this end, in 2018 FOCA brought together the most important global stakeholders in the industry to work toward establishing a digital infrastructure that will make it possible to fully integrate drones into manned airspace.

The public-private partnership, SUSI aims to identify, quantify, develop, and effectively implement the U-Space capabilities and technologies in Switzerland and beyond, including the development of a network-based remote ID.

SUSI’s success in developing this remote ID will be a huge milestone for the industry, as it will allow companies to continue their growth trajectory by testing and conducting field research at a level unthinkable just a year ago, with drones safely integrated into commercial airspace.

Even with the tremendous growth of the global drone industry, there is still no system that allows robots or unmanned vehicles access to airspace.

What does 2021 look like for drone development with remote ID in Switzerland?

Thousands of jobs have already been created in the drone industry in Switz­erland in just the past few years. These jobs are in companies that develop robotics hardware, sensors, flight systems, propulsion, data analytics, air traffic management, and much more.

Fast tracking the availability of remote ID technology for companies developing commercial drones in Switzerland will help them succeed faster, and this will benefit the entire supply chain.

Examples of companies that will benefit include INVOLI, which has developed a ground-based network of sensors on existing large-scale infrastructure in Switzerland; and Drone Harmony, which uses 3-D technology to digitize such infrastructure. As Switzerland enables companies like these to grow and prosper, the profound economic implications will extend globally throughout the field.

The Silicon Valley of Drones

Switzerland has been called the Silicon Valley for drones, with numerous inno­vation parks that offer a highly-skilled workforce, research facilities, academic resources, and full government and administrative support for companies looking to offshore or do business in Switzerland.

PX4, the ubiquitous open-source software for drones and unmanned vehicles, was developed at Switzerland’s Federal Institute of Technology, and Swiss universities continue to serve as a hotbed for new UAV technology and aircraft systems.

The beautiful landscapes of Switzerland with its alpine regions and changing seasons allow real-world field testing of hardware in rugged terrain, in harsh and changing weather conditions at varying elevations, and offer areas that allow flying beyond line of sight not available elsewhere.