The oddity on the map of the Middle Atlantic states on the U.S. eastern seaboard goes unnoticed by almost everyone—except surveyors and cartographers. In almost every other instance where a river divides two states, the state border demarcation line is the geographic center of the river. But the Potomac River has—since the English charters that granted land to the two states—been owned entirely by Maryland. The line has triggered numerous legal battles, and three times the U.S. Supreme Court has been asked to issue an opinion. All three times it upheld the colonial charters that gave every drop of water in the Potomac to Maryland.

The fact that Virginia had a constantly fluctuating border in the tidal areas of the Potomac (or in drought situations further upstream), caused problems.

So, in 1887 the two states formed a committee that decided the state border would be in a straight line from one headland to the next on the southern shore of the river. That left Virginia with a few cups full of water in the mighty Potomac behind those straight lines, but interpreting exactly where those lines fell created more problems.

In 1927 the states assigned their geologists to survey straight lines from fixed points to create a definitive state line. Edward B. Mathews from Maryland and Wilbur A. Nelson from Virginia identified specific headlands, marked points on those headlands, and established a straight line between them, eliminating the need to interpret how the location of the riverbank changed by natural processes.

While less famous than the Mason-Dixon line that established Maryland’s northern border, the Mathews-Nelson line is every bit as significant.

There are five other exceptions to the centerline rule of rivers, but none have caused the tension or created such interesting oddities and history as between the two states divided by the Potomac River.

Some of these oddities are humorous but have no lasting consequence. For example, three golf courses have holes that run along the edge of the Potomac creating scenic splendor for players but making it possible to tee off in Virginia and lose your ball in Maryland.

Or, let’s say a Virginia couple wants to get married on a boat while cruising on the Potomac past the beauty of Mount Vernon and then have their wedding reception at George Washington’s opulent Virginia estate. Very romantic, but they will need a marriage license in Maryland.

Or, Virginians can spend a hot summer day lounging on the white sand beach of Westmoreland Park, but when they jump into the water they are swimming in Maryland.

On the other hand, some of these border quirks have huge consequence. In April 2020 a group of teenagers was swimming near the intersection of Goose Creek and the Potomac when one boy went under and didn’t come back up. Another of the teens called 911 and identified the spot as the Potomac River, causing confusion as to which state’s emergency services should respond. It is doubtful that the boy’s life could have been saved without that confusion, but after that Maryland and Virginia agreed to respond first and solve territorial questions later. 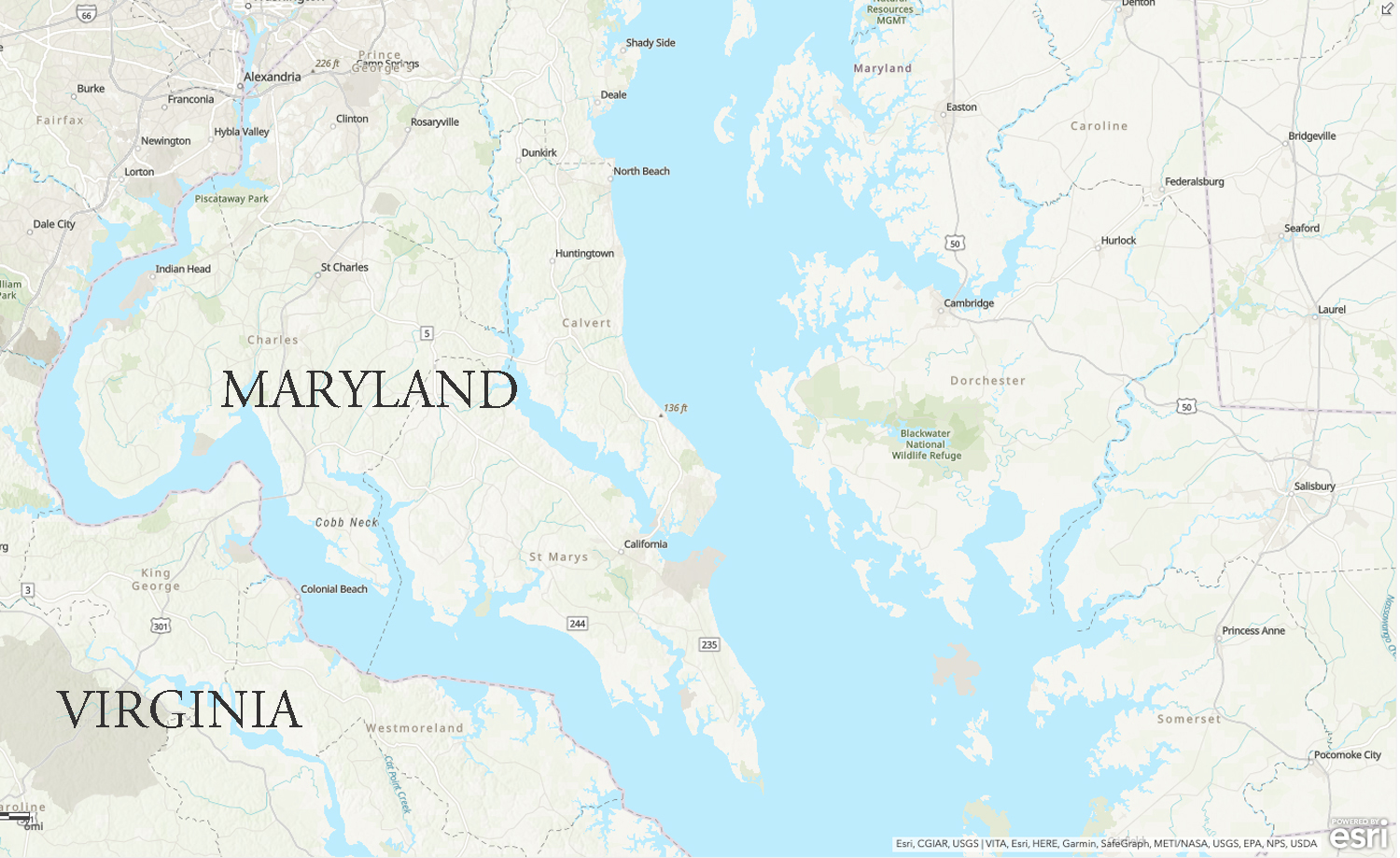 This ArcGIS map shows the Mathews-Nelson line, surveyed in 1927, which show how almost all of the water in the Potomac River belongs to Maryland, not Virginia. The survey designated straight lines between headwater point to provide a definitive line in the river’s tidal areas.

Over the years, opportunistic Virginians have taken advantage of the unusual border situation. During Prohibition, an entrepreneurial Virginia named Earl Batt recognized that if the entire river belonged to Maryland, so did its islands. Batt ran moonshine, a vocation taken up by quite a few in rural Virginia during Prohibition.

While most spent considerable effort dodging the law, Batt outsmarted the law by building his still on Tenfoot Island and transporting his product to Virginia via a small boat. Virginia authorities had no jurisdiction on Tenfoot Island, and Maryland authorities would have to travel 35 miles via the Chain Bridge to come after him, far too much effort to chase a single moonshiner selling his white lightning and breaking the law in another state.

On at least one occasion, Batt got wind that the Montgomery County sheriff was sending an arrest warrant to Virginia authorities. He dismantled his still, boated it in from Tenfoot and assumed his legal occupation as a stone mason for the time being.

When Batt’s operation was in bloom, he brewed and bottled whiskey on Tenfoot and brought it into Virginia to sell a pint jar for $2 and a half-gallon for $3.

In another affront to morality in the Potomac River, Maryland legalized gambling in 1949, and it didn’t take long for Virginian Del Connor to realize he could capitalize. He built a pier as long and wide as a football field and made sure his slot machines were out over the water and, therefore, in Maryland.

Colonial Beach was already a resort town, having been built as a riverside retreat by a group of well-heeled Washingtonians. By the early 1950s Connor owned three casinos and three more had been built over the river by other entrepreneurs. Some say 20,000 gamblers a weekend came to Colonial Beach, where they lined up awaiting their turn at one of the hundreds of one-armed bandits dangling over the water. The Sept. 7, 1957, edition of the Saturday Evening Post dubbed the town “Las Vegas on the Potomac.”

The casinos made Connor and others wealthy, but the rising gambling tide floated many boats as hotels and restaurants rode the wave and jobs for locals were plentiful and paid well. But all tides have to go out and in 1958, after years of complaints from Virginia lawmakers, Maryland amended its laws to require customers to enter Maryland gaming establishments from Maryland soil, sending Colonial Beach into an economic tailspin.

Forget tailspins, how about fender-benders? You’ll find plenty during the madness of a Washington, D.C., rush hour, where Maryland and Virginia highways and byways often inch along at the speed of two old-time surveyors moving a Gunter’s Chain. For decades both states have recognized the need for improved roads and one way to ease the trraffic burden would be to build another bridge over the Potomac River.

The only bridges over the river that handle suburban traffic are the two which carry the circular Capital Beltway between the two states. The next closest bridges are more than 30 miles away.

Virginia lawmakers have, again for decades, have made overtures to build additional bridges, offering several different plans and locations. But Maryland lawmakers express their clear opposition each time because the most logical place for such a bridge would mean a highway would have to be built through an agricultural reserve.

Maryland doesn’t want that area turned into suburban sprawl. Logic would dictate that the highway itself wouldn’t take up that much land, and if avoiding suburban sprawl is the concern, just build the highway without any exits as it passes through that land.

In most cases, state borders are simple lines, long established and rarely argued about. But the case of the Potomac River has been anything but simple.

“The Oddities of a State Border” Comments