The town of Milton Keynes is at the heart of the UK’s transport revolution. It’s home to several tech start-ups and major transport-related brands, such as Network Rail (the UK’s rail authority), Leica Geosystems, Mercedes, VW, and Red Bull F1. Its location, 40 minutes by train south to London, between Oxford and Cambridge (potentially the UK’s future Silicon Valley), makes it the perfect setting for the Transport Systems Catapult (TSC), the UK’s not-for-profit innovation center for intelligent mobility. 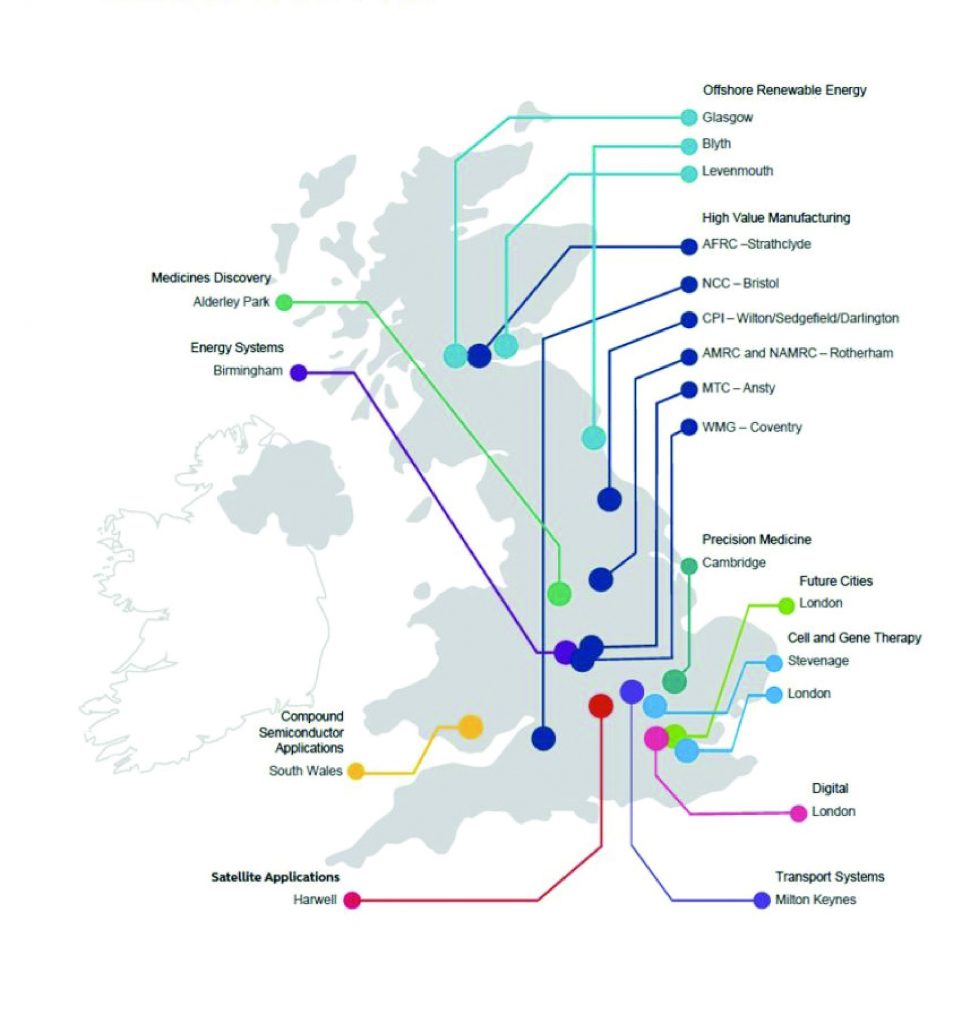 Locations of the UK Catapult Program.

Here are the basics. The TSC is a part of a UK series of 11 elite research centers in the Catapult Program, all not-for-profit and focused on specialist areas such as offshore renewable energy, future cities, and satellite applications. The organization was founded by Innovate UK, the UK’s agency for enhancing the economy by bridging the gap between small to medium enterprises (SMEs), universities, and big industry.

At The TSC, new ideas are labeled on a 1 to 9 scale system called the technology readiness level (TRL).

Ideas at 1 to 3 are early theory and experimental research, the domain of universities.

Ideas from 7 to 9 are well developed, tested, and widely adopted by industry and present a low financial risk for private investors; thus they’re the playground of big industry.

This system reveals a gap in the development cycle where good research is still too risky financially to develop. This is why we say that Catapults bridge the gap, as they help to develop those early, high-risk concepts into proven technology that the wider industry can investigate.

SMEs play a vital role throughout the process, and Catapults regularly seek to promote SME technology and capability to big industry where they can create positive impact. The TSC works across all major forms of transport, with an emphasis on seeking solutions that can be applied to multiple modes.

The TSC’s focus, the emerging market of intelligent mobility, is fast-growing and lucrative with an estimated global market value of £900 billion by 2025. Essentially, this market is underpinned by new and emerging technologies and services that can help make transport better for everyone.

High-precision location information and the tools that have been developed over the years in the survey and GIS industry have a pivotal role to play in this new market.

Connected and autonomous vehicles (CAVs) are making rapid progress towards realization. In late 2016 the Transport Systems Catapult, along with Oxford Robotic Institute (ORI) (Oxford University) and RDM Ltd (an SME based in Coventry) completed the LUTZ pathfinder project that designed autonomous vehicles and tested them in a shared space environment in Milton Keynes.

LUTZ pods navigated around the Milton Keynes train station area using the UK Selenium system (developed by ORI and Oxbotica, a UK SME and spin-off from Oxford University). They have used advanced perception and path-planning algorithms to take advantage of sensor feeds including camera and lidar, which re-creates the environment they’re in via an onboard digital map around which the vehicle can navigate. 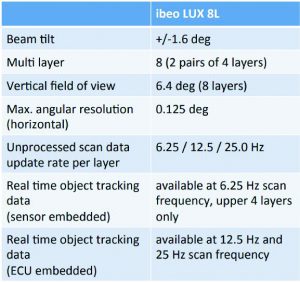 This approach is particularly adaptable for urban navigation and has no reliance upon GPS or other offboard systems. Objects such as people and other motorized users are detected dynamically by the analysis of the visual scene and comparing with onboard digital maps of the area in which the pod is operating.

An example of the kind of lidar sensors that industry are looking at include LUX 8L created by ibex, which provided an additional software capability called Fusion that enables realtime data from the sensors to be joined to enhance the object recognition and tracking capabilities of the pods. The LUX 8L sensors have a tilted mirror that spins to differentiate more effectively between changes in ground mapping and changes above ground, such as pedestrian identification.

Further experimentation of the pod concept is expected to take place in 2018 under UK-government-grant-funded projects such as UK Autodrive. They will provide links between the train station and other parts of Milton Keynes such as the shopping center. This kind of ferry service is one of the growing business cases for CAVs as a part of the “last mile” service. The idea is to link the very start and end of a multi-modal trip to the large part of the journey in the middle.

Imagine going from your house to a train station, taking the train to your destination station, then getting to your actual destination. The start and end travel methods could be linked via CAVs such as the pod concept pioneered by the LUTZ pathfinder project, and perhaps all three parts of the trip could have a single app payment system.

This connects to a concept called Mobility as a Service (MaaS) that involves the provision of entire journeys across multiple modes of transport via subscription or interaction with a single service provider through a digital interface.

The geotech industry has a big part to play in developing autonomous vehicles and helping them interpret their surroundings and where they are going, but also in driving advanced analytical platforms that aim to make all our lives much easier on that morning commute.

MaaS with autonomous vehicles in the mix will no doubt change the way we navigate our daily lives and how society develops in general. To envision these changes, consider the five levels of automotive automation, with each increasing stage shifting control away from human to machine control.

Right now, most public vehicles can be categorized between no automation and levels 1 or 2, with features such as ACC and automated parking becoming more available. Some car manufacturers such as Tesla have pushed beyond that, enabling their latest generation of cars to control speed and direction on specific roads. However, drivers are still required to keep their hands on the wheel and eyes on the road.

We are likely to see the biggest change in our daily lives when we switch to levels 4 and 5: full automation, where the car becomes a new space rather than just a way to get from A to B. You’ll be able to watch a film, take that important business call, or read the latest xyHt issue from the car rather than dedicate time for these activities before or after your journey. For example, in London drivers on average waste 100 hours a year in traffic, time that could be better spent.

Your car in the not-too-distant future may not be your car. A popular view is that cars will be owned by companies or governments and operate like a personalized taxi service. In terms of pure efficiency this makes sense, as 90% of a car’s currently life cycle is spent parked. With this model, urban space currently reserved for parking could be transformed into new living space, increasing the capacity of the world’s rapidly growing cities.

The pushback tends to be that most people like their cars to fit their tastes and needs individually. Designers are looking at configurable spaces that could change between a seven-seater to pick up the kids on the weekend to a single mobile office with a chair and desk space for the morning commute. (The real trick will be getting the cars to show up clean every time.)

The LUTZ Pathfinder project is but one of many projects Transport Systems Catapult has been involved in as milestone projects to keep the UK at the head of the automotive automation industry.

To find out more about the innovative work at Transport Systems Catapult and see how you can get involved in the intelligent mobility industry, check out Catapult online.

Click to watch Jan Van Sickle of Here Technologies talk about “GIS and the Autonomous Perspective.” on xyHt’s YouTube channel.