When rescue and recovery crews make their way through communities devastated by hurricanes, tornados, and wildfires, what they need are maps to help them to get around safely. One of the most relied-upon sources of these maps has been the U.S. Army Corps of Engineers, Geographic Information System (GIS) Cadre. The cadre has successfully created maps to assist many federally declared disasters since 2002, including Hurricane Katrina and most recently Superstorm Sandy.

Stephen McDevitt, a former action officer for the cadre and former coordinator for the Enterprise GIS for the corps’ New York district, has been active with the cadre since it was created 11 years ago. Now as he nears his retirement he says he hopes the cadre, unique from other GIS teams, will continue well into the future.

Stephen McDevitt, former action officer for the U.S. Army Corps of Engineers GIS Cadre and former coordinator for the Enterprise GIS for the Army Corps’ New York District. He has been active with the Cadre since it was created in 2002. Credit: Dan Desmet, Public Affairs, USACE, New York District.

“I am proud to have had the opportunity to serve with the GIS Cadre since its creation. After 30 years of service with the federal government, I can honestly say it has been one of the most rewarding experiences,” said McDevitt.

The Corps already had Planning Response Teams for disaster rescue and recovery, including teams to perform temporary housing, power, water and ice missions.  They thought having a GIS team to support these other teams would be very useful.

The cadre is a team of Army Corps employees from throughout the nation who are GIS subject-matter experts. When a federally declared disaster occurs the team gets ready to deploy and can be on the ground in just hours, setting up their own equipment even before other agencies are on the scene.

At the disaster location, they provide their GIS expertise in support for USACE Emergency Support Teams and for the Federal Emergency Management Agency (FEMA) and other state, federal, and volunteer agencies.

Says McDevitt, who was one of the national action officers responsible for deploying and managing GIS teams during nationally declared disasters,

“FEMA has called us for every major disaster since the team started in 2002.” These missions have included ice storms, hurricanes, typhoons, tornadoes, floods, wildfire disasters, and could also include man-made terrorists events.

For these missions, a wide variety of maps have been created to help agencies to make important decisions to support relief and recovery efforts after a disaster strikes. Following are a few of these maps.

Rescue & Recovery:  The cadre creates maps using geospatial information on where hurricane victims are located so that search and rescue workers can locate and recover stranded individuals.

Building Temporary Homes & Critical Facilities: Temporary housing and critical public facilities can’t be constructed on flood-prone land. The cadre creates maps that show agencies where there are flood zones. In addition, they create maps that show where there is safe land to place housing and facilities that is away from the devastation and near water, sewer, and electric lines and services, such as schools and hospitals.

Identifying Impacted Communities: The cadre can create maps that show the locations of damaged homes and businesses. These maps show agencies, like FEMA, where displaced citizens requiring assistance may be located and where recovery centers should be stationed. The cadre can also create demographic maps so that agencies know where economically challenged individuals may live who do not have transportation to reach the nearest recovery center. In these cases, a mobile center can be sent to these areas.

Preventing Future Safety & Environmental Problems: The cadre creates maps that can help communities prevent future dangers. For example, in the aftermath of the Southern California wildfires in 2008, the cadre created soil burn severity maps. These maps show where the fires burned the valley the most and where there is soil erosion. These large pieces of hardened soil can cause mudslides down hills during the rainy season, creating dangerous landslides. These maps also show agencies where people should be evacuated.

The Army Corps’ GIS Cadre is unique from other national GIS teams because these individuals are not only GIS specialists, but are also from other disciplines with the Army Corps. These professions include geographers, cartographers, physical scientists, civil engineers, park rangers, environmental scientists, and others.

“Because of this they bring a lot to the table,” said McDevitt. “We have engineers and hydrologists who use GIS to support District projects. These additional skills are very valuable when it comes to disaster situations.  For example, if flood zones need to be identified before temporary housing can be set up, those with both GIS and water resources skills are especially useful for working with this data.”

He added, “If there wasn’t a GIS cadre, FEMA would be constantly contacting the Army Corps for information needed during a disaster, pulling Army Corps personnel away from other important projects.  By having this specialized GIS team, the team can focus their time and energy to the mission on hand.  This is more efficient and makes better use of tax payer money.”

McDevitt said that the cadre’s future is bright, and he hopes it will continue strong for another decade or more. He says what will contribute to its success are team members who have GIS skills. These skills can come from having experience working with remote sensing and Computer Aided Design (CAD) and other geospatial data and systems technology.

There is also an increased need for individuals with advanced computer skills because much of the new mapping applications are web-based. This includes knowledge of HTML 5, Java, and Silverlight as well as good database skills, such as working with Oracle, because the team works with large data sets.

McDevitt said, “The Army Corps’ GIS cadre stands ready to serve the nation, whenever and wherever there is a need for dedicated GIS subject matter experts.” 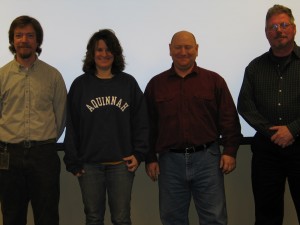 McDevitt (Far right) when he was an action officer with members of his GIS Cadre team. Credit: U.S. Army Corps of Engineers.