Above: You can connect to Esri’s ArcGIS directly from inside Autodesk’s Civil 3D.

The Autodesk-Esri collaboration continues to lead the way in AEC+GIS with the announcement of significant, direct—and lateral—developments.

Now entering its third year, the Esri-Autodesk collaboration launched in 2017 with great enthusiasm, as many practitioners in respective disciplines had been struggling with legacy barriers to CAD-GIS integration born of structural differences and (at times) a bit of tension between companies and user communities. But struggle no more: the partnership has already proven fruitful.

First steps included the Autodesk Connector for ArcGIS, with Autodesk Infraworks as the first product to incorporate these new features for live and seamless bi-directional GIS access and update.

More recent is a similar addition, the Autodesk Connector for Civil 3D, that is really huge news, and I’ll elaborate later.

But first, note that there has already been an update to the connector for InfraWorks as well as some lateral developments, particularly in the realm of improving the precision of GIS asset mapping, that speak to this timely trend in cross-pollination between the worlds of AEC and GIS.

The Autodesk Collector for Infra- Works enables direct access to the contextual richness of GIS thematic data in this popular software used in large-scale civil design and infrastructure management. It also enables updating the linked GIS themes. The September release of InfraWorks 2020.1 has enhanced this even further with new capabilities to publish to ArcGIS.

Beyond the GIS connection, they’ve added more network license support, and now you can reimport road and bridge alignments as they are updated in Civil3D and Revit, avoiding prior workarounds. And while it might sound trivial, I do like the enhancements to the interface; the improvements result in ease of use.

Though InfraWorks was the first of Autodesk’s major AEC products to get such a connection to ArcGIS, speculation was that Civil3D would be next. Yes, on September 4, 2019, Autodesk Connector for Civil3D was announced and is a significant element of the Civil3D 2020.1 release.

It is safe to say that many of our readers in surveying, civil engineering, and digital design/construction have had experience with operating (or have worked with data from) Civil3D. Thematic data from GIS have always been (at differing levels) part of design engineering/construction/operations. But, the significance of this release is in ease of accessing, using, and updating such data, without relying on complex import/export routines that in the past might have resulted in losses of data.

Specifics of the new Civil3D 2020.1 release are best detailed in a recent blog post by Autodesk’s Bobby del Rosario, including new features beyond CAD+GIS. His post includes links to informative videos.

I also asked Wes Newman, a technical marketing guy at Autodesk, about his insights on this latest development. Newman has a lot of hands-on user experience and was heavily involved in the ArcGIS+InfraWorks integration.

“Much of what we did, working closely with Esri for [integration] with Infraworks, served as a basis for what we have done with Civil3D and Map3D; a lot of the core code was done,” says Newman.

He explains the GIS-to-CAD workflow: “From inside Civil3D and Map3D you can connect to ArcGIS, log in to your account, and browse. And if an enterprise, like a city or county, is publishing public data sets, you can browse without a login.

“With this [release] you can bring in GIS data [in the form of] cogo points, features, lines, alignments, parcels, and pipe networks.” And he notes that you can work with geodatabases. More will be added in future releases.

The CAD-to-GIS workflow allows you to add new feature layers to ArcGIS, but not individual entities yet, though you can edit and attribute or update a location. Newman says this is being looked at for future releases.

Many Steps Leading Us Here

CAD+GIS and GIS+CAD (I had to flip a coin to decide which one I’d write first so as not to slight either side) is about removing the “sides” when it comes to AEC design, construction, and operations. Being able to access broader contextual site and regional data and networks of utilities and transportation to inform civil design has always been a goal. There have been ways to get the data to and from GIS and CAD, mostly by import/export routines—but they were often cumbersome and came with compromises.

Decades ago, there was an early collaboration between Esri and Autodesk on ArcCAD. And for the DIY crowd, there were command line routines like SHP2DXF. As the roots of Civil3D evolved from DCA to Softdesk Civil to LDD, Autodesk MAP elements were integrated. Users were hungry for GIS data in civil design and to be able to add, for instance, surveyed or as-built data back into GIS.

Shapefiles often became the common currency. I can write about some of the legacy “workarounds” from first-hand experience (I still have scars). The situation we were trying to address (about 20 years ago) was supporting engineering design in a dense urban environment that had rich GIS with dozens of data themes (layers) that would be useful to the civil design teams.

Such data provides valuable “context” to the “content” of CAD designs. Designers are well aware that the GIS data may not be as spatially accurate as, say, surveyed data, but even if coarsely located, the attribute data could be key in decision making and in developing design alternatives.

The solution for us at the time was writing multiple Avenue scripts for ArcView to clip out mini shapefiles from multiple themes and a 14-page AutoLISP routine that would write, then run, a custom script each time to import them via “aeccmap” sub-routines as AutoCAD entities with attributes as extended entity data. There have been great improvements in the Map features for connection to GIS data and popular third-party geo-data “universal translators,” but nothing quite where we are now.

We’ll be reaching out to users and taking new developments out for test drives, as the road to CAD+GIS nirvana will involve many steps to come. But, in my view, this addition to Civil3D is a mighty big one. 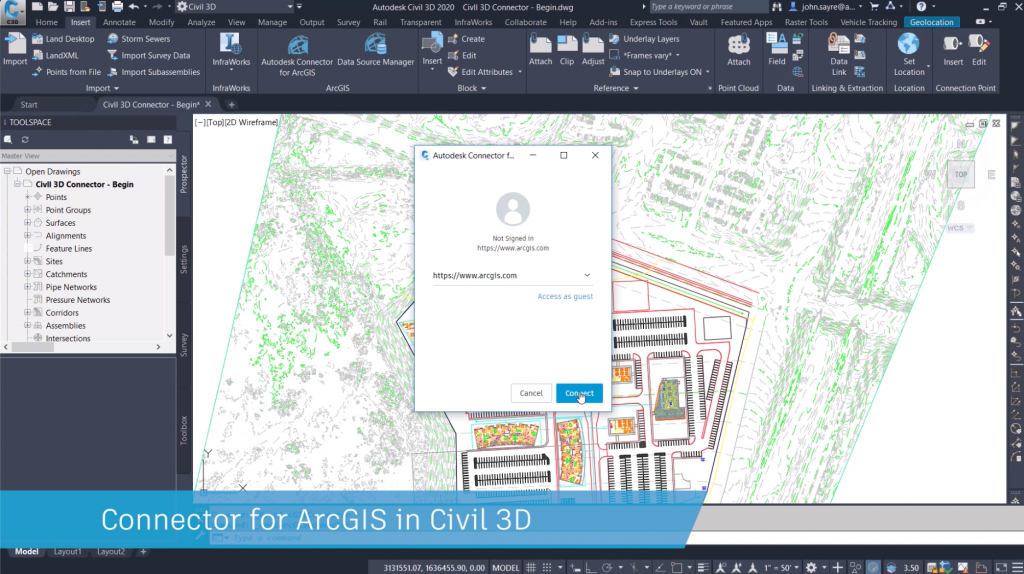 You can connect to Esri ArcGIS directly from inside Autodesk Civil 3D.

If the data and workflows for AEC and GIS continue to come together, so should the underlying positioning, locations, and measurements. Across the industry, the worlds of GIS and high-precision positioning, surveying, and field asset mapping continue to merge.

For example, there is now a Trimble Positions Desktop plugin for Esri ArcGIS Desktop and enhanced support for Trimble “R” series high-precision GNSS receiver/antennas in Esri Collector. The use of Collector is booming for asset inventory and updating GIS, not only with attribute data, but also spatially—even to the centimeter or survey grade (depending on GNSS peripherals utilized). This grows the list of Collector support of GNSS peripherals (of many brands/models) ranging from sub-meter to centimeter.

The beauty of this type of configuration—namely a mapping app that can run on standard mobile platforms for phones and tablets, getting its position data from a connected high-precision GNSS system—is that more people can get more data—accurate data—quickly and affordably. This has been dubbed the “bring your own rover” trend.

One of the misgivings that some in AEC disciplines had about legacy GIS was that it was not often spatially accurate and certainly not as accurate as the surveyed data they were accustomed to using. Of course not: GIS may have had to cover large areas, and high precision did not come cheap. Even when field asset collection was done in past decades, it might have involved, say, an intern with a very rough, meter at best, GIS handheld. Not anymore. For the same amount of labor, you can get high precision and accuracy—and the prices for such gear keep dropping.

AEC and GIS, CAD and GIS, CAD and BIM, GIS and BIM, geodesign: these are different ways of characterizing what has become a timely and inevitable trend. Talked about in the abstract for decades, any realization would not be possible without the kinds of collaborations we are seeing from folks like Autodesk and Esri.

In a post earlier this year I likened this new openness to collaboration to a couple who had been eyeing each other for a long time, tried dating in the past, had a few misunderstanding along the way, but finally decided to “go steady” (happily walking off, hand-in-hand into the sunrise of a bright future together).

Other examples outside of this specific collaboration solve other big “plus” conundrums. For instance, Autodesk and Leica Geosystems collaborated on the BLK360 + ReCap Pro to improve workflows for reality capture for the BIM market. A recent example is the integration of scan data from the new Topcon GTL-1000 (a scanner that sits atop a survey total station) in ClearEdge3D Verity software to automate elements of comparing design and as-built features in Autodesk Navisworks. Plus, there’s a big new wave of reality capture, BIM, and workflow management solutions from across the industry—growing faster than we can keep track of.

The Autodesk and Esri partnership formed from a mutual recognition that the two worlds of AEC design and GIS involve structurally different platforms, different strengths, different areas of expertise, and different markets. More importantly, such collaboration was an imperative, a critical evolutionary step in infrastructure design, construction, and operations.

This collaboration comes as the demands of global infrastructure development are now far exceeding the capacity of legacy workflows and the compartmentalization of geospatial data. AEC and GIS are growing and evolving together to meet these needs.