Unmanned aerial vehicles (UAVs) or drones, as they are commonly called, are mostly electric-powered aircraft, which do not require a pilot onboard and are used to perform tasks that are either too dangerous for humans to do or too expensive with other methods.

Today drones are used to make deliveries, inspect infrastructure, perform public safety functions such as monitoring of active crime scenes, fire detection and even fire suppression, but one area that has particularly benefited from the drone revolution is construction.

Construction is and extremely complex series of different responsibilities that must be carefully choreographed to avoid unnecessary waste of time and resources, especially money. Different contractors must perform delicate tasks in close coordination with multiple suppliers whose work needs to be performed at exactly the same time or in close sequence.

There are many phases or stages in the life of a building, from site surveying to architectural and landscape design, followed by construction and eventually management and the inevitable change of ownership that real estate assets are subject to. That is why we have selected four key stages in the life of a structure which have been impacted by the availability and affordability of UAVs.

SITE SURVEYING
The first step in any construction project, from a modest house in the suburbs with a quarter-acre lot to a large highway interchange occupying hundreds of acres and millions of tons of concrete, is the surveying, or mapping of the site.

Since their inception into our lives in the early 2010s, drones were identified as magnificent surveying platforms and mapping was one of the first commercial uses of these small, unmanned marvels. Capable of flying at relatively high speeds and low altitudes and equipped with high-resolution cameras and geodesy-grade GNSS receivers, drones can achieve amazing precision of a construction site at a fraction of the cost and time of manned aircraft and even ground crews. 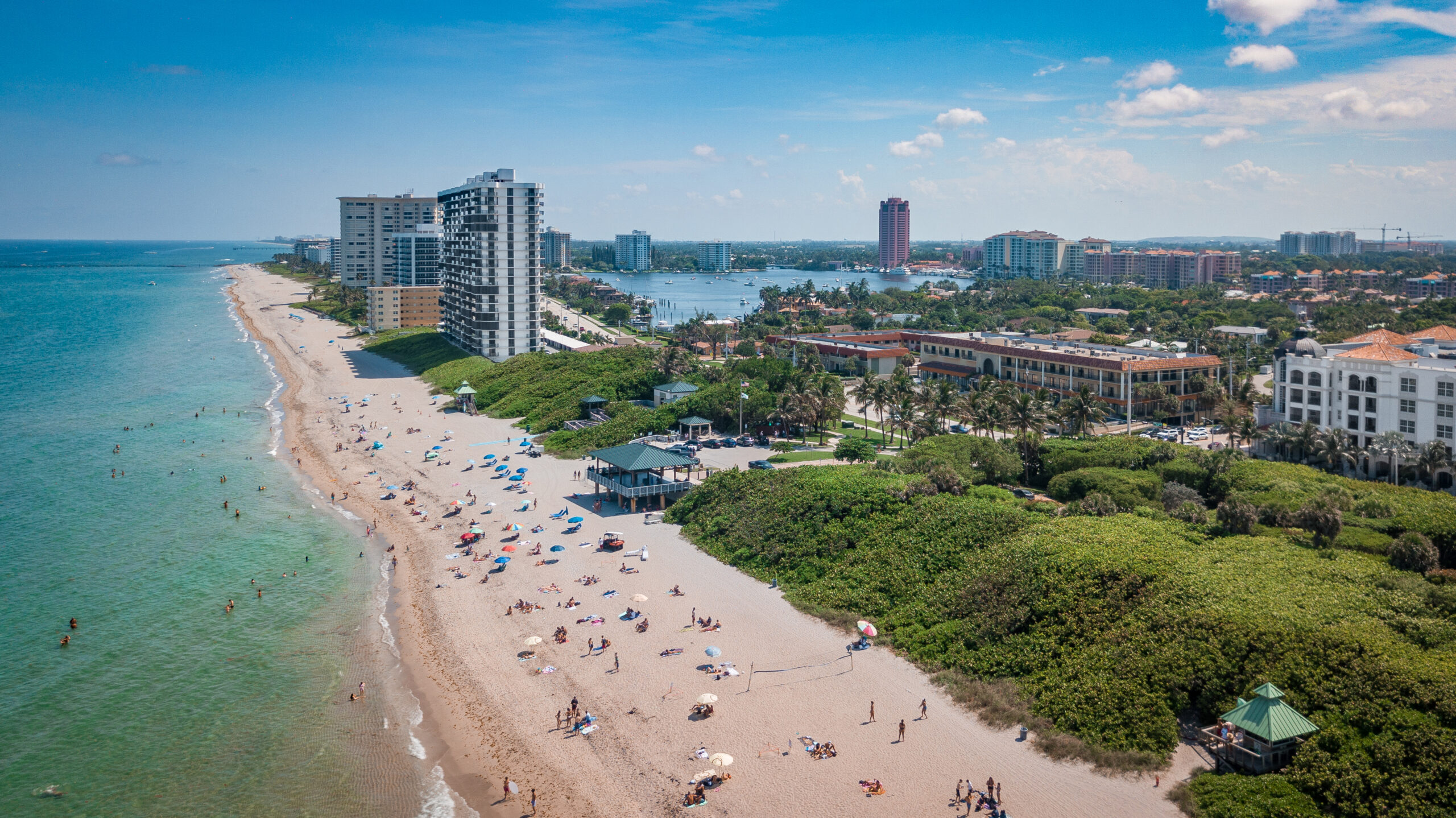 Real estate photography is one of the fastest growing segments of drones in the construction business. Image courtesy of Eyes in the Skies.

Today unmanned aerial mapping platforms are a business niche that has sparked the creativity and entrepreneurial spirit of many young professionals who are developing the next generation of mapping drones. Kyle Miller, director of business development at Florida-based Censys Technologies has had a close look at the impact that these new tools are having in the construction business.

“It’s amazing how the last 10 years have changed in the construction industry with the introduction of mapping drones,” Miller said with enthusiasm. “Today surveyors can arrive at a potential site and have the entire area mapped to precision in a matter of hours. Not only that, but they can also derive complex products such as digital terrain models (DTM) and contour lines, all from the same set of images.”

“We are at the threshold of the next major revolution in drone mapping in construction.” Miller said. “Once surveyors can map a site in one session, regardless of size, the promise of potential savings of time and money will be completely realized.”

INSPECTION OF CONSTRUCTION
Once the site has been surveyed and the architects and engineers have agreed on a design, construction starts and dozens of different contractors descend on the site to begin the complex and tightly choreographed task of erecting a structure that contains electric, water, drainage, electronics, and many other services and amenities included in a modern building.

Drones are playing an innovative role in the constant monitoring of large construction locations from the day the activities begin. They track everything from coordination of activities at different areas of the site to volumetric calculations of consumables such as land fillers and gravel.

Companies are now creating revenue streams by adding innovative processes involving drones. Beginning in 2015 creative enterprises in the construction industry saw an opportunity to add a competitive advantage by adopting an unproven device, considered until then simply as a toy.

“It was a slow and painful process, but we knew that it was the future.” Scaperrota said. “In 2015, when we started using drones for certain activities around a construction site, most people were skeptical and the doubts were persistent. But eventually individuals and the industry as a whole saw the benefits in terms of safety and money, and today it will be difficult to be competitive without drones.”

Government organizations have also found a way to use unmanned platforms to perform tasks that improve efficiency and worker’s safety. One great example is the Mississippi Department of Transportation (MDOT), which uses lidar to improve road construction efficiency and safety around the state. MDOT has purchased lidar drones to add to its fleet of vehicles that use lidar to take measurements and map out road construction projects.

Mississippi is one of the first states in the southeast to use lidar drone technology in state construction work. These drones allow MDOT workers to perform their fieldwork much faster than traditional measuring tools. The technology also increases safety for MDOT workers, greatly reducing their time on the job near or in moving traffic.

INSPECTION POST-CONSTRUCTION
The comparison between the design/construction phase of a building versus the maintenance of that building is, in an optimistic way, one-to-40 or more. In other words, for every year invested in designing and constructing the edifice, there will be 40 years of maintenance. This immense disparity led to the creation of BIM (Building Information Modeling) in which software companies such as Autodesk saw an opportunity to extend their involvement with construction and administration companies from the pure design phase into the longer and potentially more lucrative area of asset maintenance.

The same applies to unmanned platforms in which startups are forced to investigate new areas of innovation in order to survive. One such area is post-construction inspections, and the best example is roof inspections. This market niche has exploded in popularity thanks to a couple of factors-speed and safety. Climbing to a roof is never safe, now imagine doing it when its slippery or being accurate with your measurements when the sun is up and the temperature is more than 100 degrees F.

Roof inspection by drones is a business that has grown more than 1,000 percent over the past five years thanks to the availability of affordable platforms, incredible advances in sensor technology, and the formalization of the flight itself, in the form of the FAA Part 107. Today, established roof maintenance companies can pivot from using workers to climb roofs to using drones to perform the same task in less than half the time and with increased accuracy while eliminating the risk of worker’s compensation claims that had plagued the industry for decades.

New applications are being discovered and implemented almost daily. In New York City, for example, companies are beginning to inspect high-rise exteriors after winter to find cracks in the bricks or any other potential hazard to the building itself or pedestrians hundreds of feet below. The same applies to faulty windows, external air conditioning units, and any other feature located so high it makes it difficult for humans to inspect.

REAL ESTATE
And last, but not least the issue of real estate photography by drone, which has taken the industry of buying and selling property by storm. Today it will be rare for a house listing not to include and external panoramic flight of the property.

There is no doubt that real estate photography today is more than just taking pictures of a property, surveying tools such as laser scanning are revolutionizing the way we evaluate buildings by providing online 360-degree views of every room in the building.

Drew Birch, owner of Eyes in The Skies, a real estate photography company in Palm Beach, Florida, has seen drones and other sensor technologies change his business.

“For decades real estate photography was just about a couple of external images plus the inevitable interior pictures of rooms and features. But with the adoption of drones, the entire industry pivoted to a high-tech niche in which various technologies with degrees of complexity mix to provide a 360-degree view, externally and internally, of a property.”

When the conversation turned to competitive advantage, Birch joked about his decision to get into real estate photography.

“It’s funny but I entered the real estate photography business because of drones,” he said. “Before drones and the other tools we have today, real estate photography was relatively dull, but after the introduction of technologies such as Matterport 3D Tours and drones, it became a highly sophisticated and competitive landscape. I love to present my customers with complete inside and outside views of their properties and enhance the potential value of the sale.”

Regardless of what aspect of construction you are involved with, it is inevitable that you will encounter drones in one form or another. An industry that has been around for more than 100 years rather unchanged is now thriving with innovation and technology. From design to the use of BIM to the sale of the finished product, drones have been a key component of this transformation and the forecast promises more innovation. 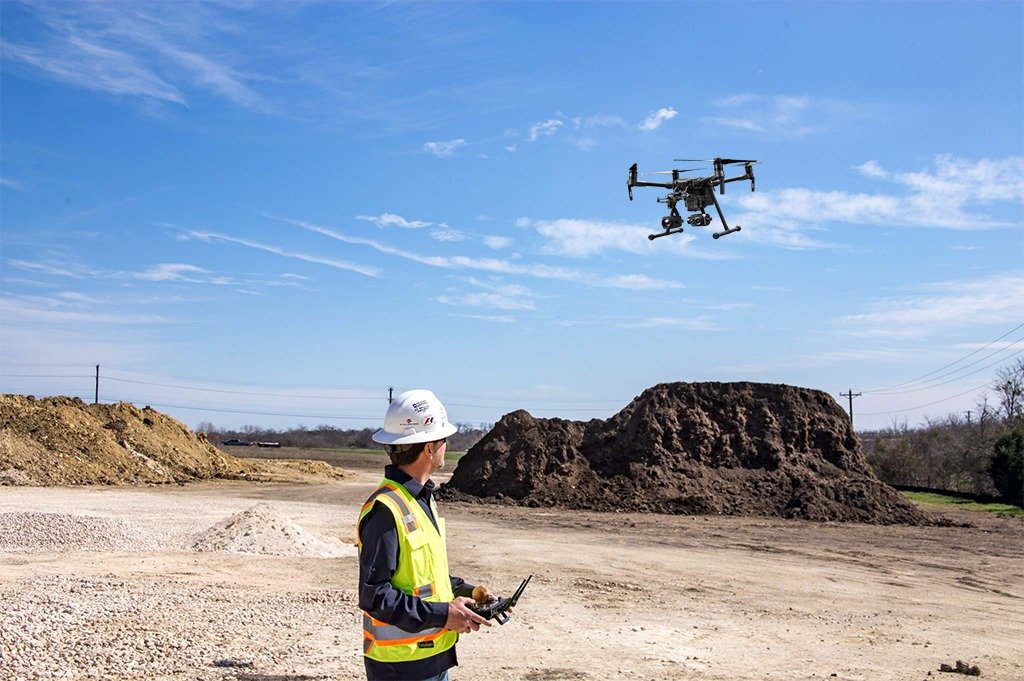 Drones are being used during construction projects for a variety of tasks, including monitoring volume of consumables such as sand and gravel. Image courtesy of Connexicore, a Volatus Company.