Editor’s Note: The field of ground-penetrating radar (GPR) is experiencing a new wave of development. For many of our readers, first impressions of legacy GPR gear included a lot of limitations and confusing images. The following is an examination of a new technique called HyperStacking and is also a good primer on the fundamentals of GPR technology. The author works at Geophysical Survey Systems, Inc. that produced their first GPR system in 1971.

Ground-penetrating radar (GPR) is an electromagnetic imaging technique that allows users to see beneath the surface through soil, pavement, concrete, ice, and even water. GPR is widely used for utility mapping, concrete inspection, forensic investigations, geological surveys, and archaeology.

Now, new technology has been developed that meets even the most stringent GPR emissions regulations, including those of the U.S. Federal Communications Commission and the European Telecommunications Standards Institute, while operating at similar or faster speeds than conventional systems in difficult soil conditions.

This new HyperStacking technique allows users to see deeper targets and operate in conditions considered too “noisy” for conventional systems. 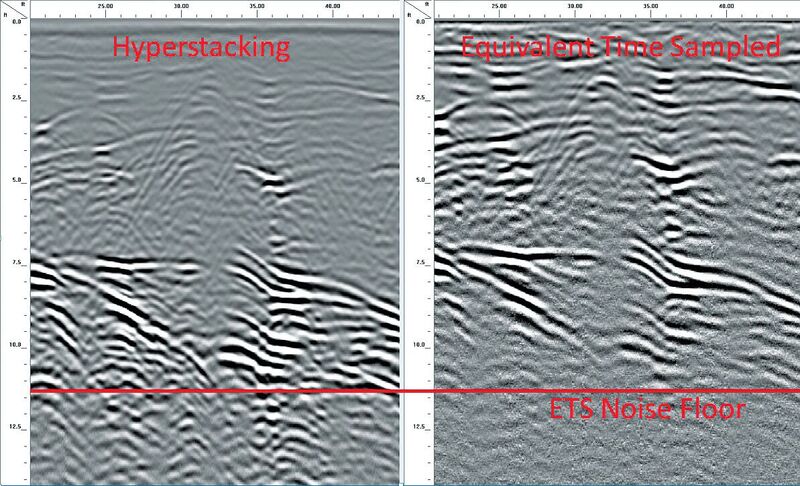 Two GPR files taken at the same location at the same time with identical processing. At left is HyperStacking, at right is conventional (ETS).

GPR is an electromagnetic technology that uses the same kind of radio waves as microwave ovens, cellular phones, and broadcast radio and television. GPR systems operate under the same principle as other radar systems, medical ultrasound, and even fish finders.

A GPR system includes an antenna, a power supply, and a control unit with electronics that trigger the pulse of radar energy the antenna sends into the subsurface. The antenna receives the electrical pulse produced by the control unit, amplifies it, and transmits it into the ground or other medium at a particular frequency.

Subsurface variations will then cause these signals to bounce back. The strength and time required for the return of the reflected signals is then recorded on a computer integrated into the system.

As the technician using the GPR equipment moves along the area being scanned, items detected are revealed and information is displayed on the computer screen in real time. The data collected is then analyzed and used to make specific recommendations.

For example, a GPR wave directed through the soil towards a piece of buried PVC pipe would reflect some of the signal towards the surface. The magnitude and timing of this echo will be proportionate to the size and depth of the buried pipe.

Because electromagnetic waves travel at the speed of light, if this pipe were buried at three feet, a typical echo will occur just 20 nano-seconds (billionth of a second) after the signal is sent. This means that exceptionally fast receiver circuitry is required to correctly estimate the timing and scale of the signal.

The samples taken from each acquisition are put together and reconstructed. Multiple triggers are required to capture enough points to reconstruct the waveform. The technique is most useful when capturing repetitive signals. (For more on the primary differences between real-time sampling and equivalent time sampling, we recommend this paper.

Like a camera flash, which can make a fast-moving object look frozen in time, electrical waveforms can also be captured at just one precise instant. By repeating the transmitted signal many times but moving the exact instant of capture, one can simulate the echo response.

It can be likened to making a 100-frame motion picture of a bullet travelling through the air–but doing so by firing the gun 100 times and triggering the camera at a different time for each firing. Although stroboscopic techniques can be effective for capturing extremely fast-moving events, they are not the best or most efficient way.

Just as modern high-speed video cameras now exist for capturing a bullet in flight in real-time, we can now also capture an entire ultra-fast radar reflection the same way–by averaging (or stacking) the results of many individual GPR scans. Random environmental and electronic noise disappears through this averaging process, while weak targets emerge from the snow-like obscurity.

Because high-speed GPR systems recover identical radar scans hundreds of times faster than conventional ETS systems, this averaging operation goes on in the background and does not affect the rate of data collection.

The 350 MHz antenna, for instance, is ideal for utility detection in soil conditions in the 0-15 ft range. Lower-frequency antennas, in the 100-200 MHz range, are well-suited for geotechnical applications, such as water-table analysis, characterization of shallow stratigraphy, bedrock-depth analysis, and analysis of deep geological structures. In these applications, traditional techniques such as ETS cannot achieve the same level of precision as HyperStacking.

With the commonly used ETS technique, hundreds or even thousands of pulses are transmitted to obtain a full measurement set over the desired time range. However, most of the received energy is discarded, and the resultant measurement is inefficient, in terms of noise, relative to the amount of energy transmitted.

By contrast, the new technology uses high-speed interpolated sampling, which recovers all or most of the reflected radar information, greatly improving the measurement signal energy with respect to noise. In the past, these techniques have been expensive and far too energy-consuming, but recent advances in integrated circuit technology have enabled the development of low-cost devices that perform at reasonably high speeds while consuming relatively small amounts of power. 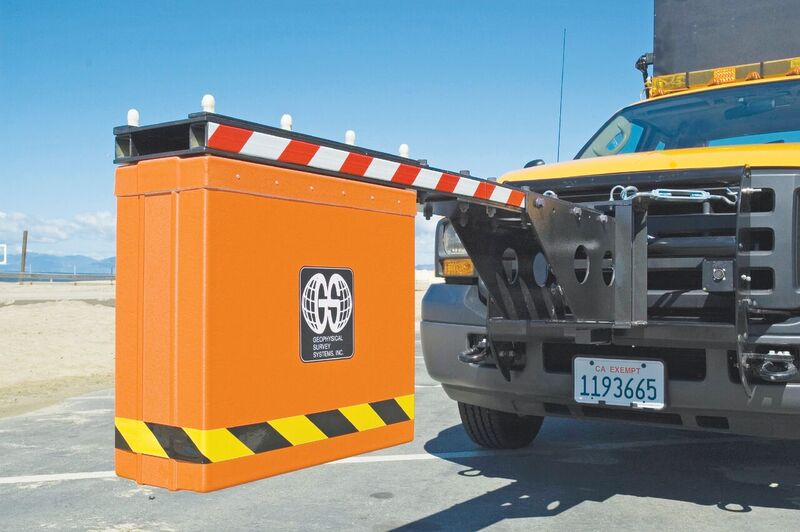 This large, cart-style GSSI GPR unit is mounted on a vehicle for sampling at reasonably high speeds.