A review of Trimble’s R1, a GNSS Bluetooth peripheral for mobile devices, with multiple options for correction sources.

The idea of a GNSS “puck” has broad appeal: a peripheral GNSS receiver to precision-enable mobile devices such as smart phones, tablets, and a variety of purpose-built field-data-collection devices. There is a lot of functional territory between the uncorrected GPS (and A-GPS) readily available on smart phones and car navigation devices and the GNSS for high-precision, real-time corrected surveying rovers. Plus, there’s a hungry market looking for a balance between precision, cost, and operational overhead. 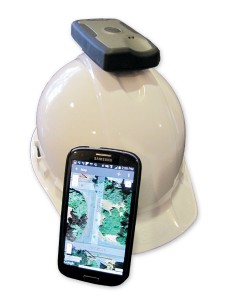 The R1 comes with a mounting adapter for use with a standard pole; I also tried it attached it to a hardhat and with a common smartphone.

In the field, functions such as asset mapping and utilities and infrastructure inventory and management have substantial needs for location and validation. And it seems like the world of apps (and mapping apps) that had traditionally lagged behind positioning hardware has moved far ahead. There are few affordable options for that in-between precision sweet spot—a bowl of porridge that Goldilocks would find just right.

Why not build a solution that leverages the rapid adoption of personal mobile devices? It is nearly a given that field personnel (such as for utilities) are probably already carrying a mobile device or smart phone (to access records, plans, email, or even do their timesheets), but the built-in GNSS on these is disappointing (i.e. +/- a meter one moment and +/- 10 meters the next).

What an untapped potential! The entire enterprise could be “crew sourced”: that’s like crowd sourced but with the infrastructure experts making informed choices in data collection. The marvellous apps for mapping, asset inventory, and infrastructure management have been screaming for higher precision. Work-arounds have been available; many survey-grade rovers can be Bluetoothed to mobile devices (but with a hefty price tag), and there are lower-precision GNSS boxes that can be connected, but usually with a premium on getting it all to work seamlessly. And there are often few options for accessing corrections’ sources to get the precision into that sweet spot of a reliable sub-meter.

The Trimble R1 is not a surveying rover (and does not pretend to be one). It is purpose-built specifically for asset and resource mapping and infrastructure management and is priced in the range of one-quarter to one-fifth of a typical surveying rover. It is rugged (IP65) like a lot of mapping handhelds and surveying rovers; it has a battery that can last a day’s work; and it can connect via Bluetooth to mobile phones and devices running iOS 7 and 8, Android 4.1 or higher, Win 7 or higher, and Windows Embedded.

It is a very simple device—I got it up and running in minutes. The concept is even simpler. It replaces the positioning of the internal GPS in your mobile device, adding that higher precision to any app that uses location (for all but one of the correction source options, but more about that later). I was amused to discover that the app for my local bus system finally puts me on the same side of the street as the actual bus stop.

One characteristic that sets this apart from the work-around systems I’ve looked at is that there are unique options for correction sources. While this is a single frequency receiver, it tracks GPS, Glonass, Galileo, and (Beidou) Compass; this adds a lot of satellites in view to help in canopy or urban canyons, to some degree.

You can run with simply uncorrected GNSS, connect to SBAS (e.g. the WAAS satellites operated by the FAA), or connect to a real-time network (or internet-enabled base) via the built-in NTRIP client. These three options will feed NMEA positions to any app that would otherwise use the built-in GPS on the device.

But when using Trimble mapping apps, like TerraFlex, you have the additional option of receiving corrections from the Trimble’s ViewPoint RTX subscription service (available via internet connection or their geosynchronous orbit satellites). RTX is Trimble’s own real-time PPP (precise point positioning) service, providing enhanced clock, orbit, and other modelled products from their own global tracking network. Though a convergence time is needed at the start of each session of observations (in my tests these were always less than two minutes), this PPP service can deliver high precision anywhere (within the view of the delivering satellites), even where no cellular connection is available.

Precision tests were performed on our local NGS calibration baseline and then on an area where utilities had been previously located with conventional instruments—and under mixed canopy.

Clear sky uncorrected precision would vary between 1.5m and 9m; SBAS (WAAS) would vary from 4.5m to as good as about 70cm. NTRIP connection to local real-time network (RTN) brought this down to a fairly steady 60cm to 1.2m.

RTX (both internet and satellite) fell between 60cm and 1.5m—but generally both RTN and RTX stayed comfortably sub-meter; even in light canopy.

Inverses of observations between the NGS baseline marks confirmed the repeatability of observations taken over several days, as did check-ins to previously observed utilities. I expected and experienced degradation under denser canopy (as one would expect even with a top-end rover), but I noticed a port on the R1 to connect to an external antenna, which might help. 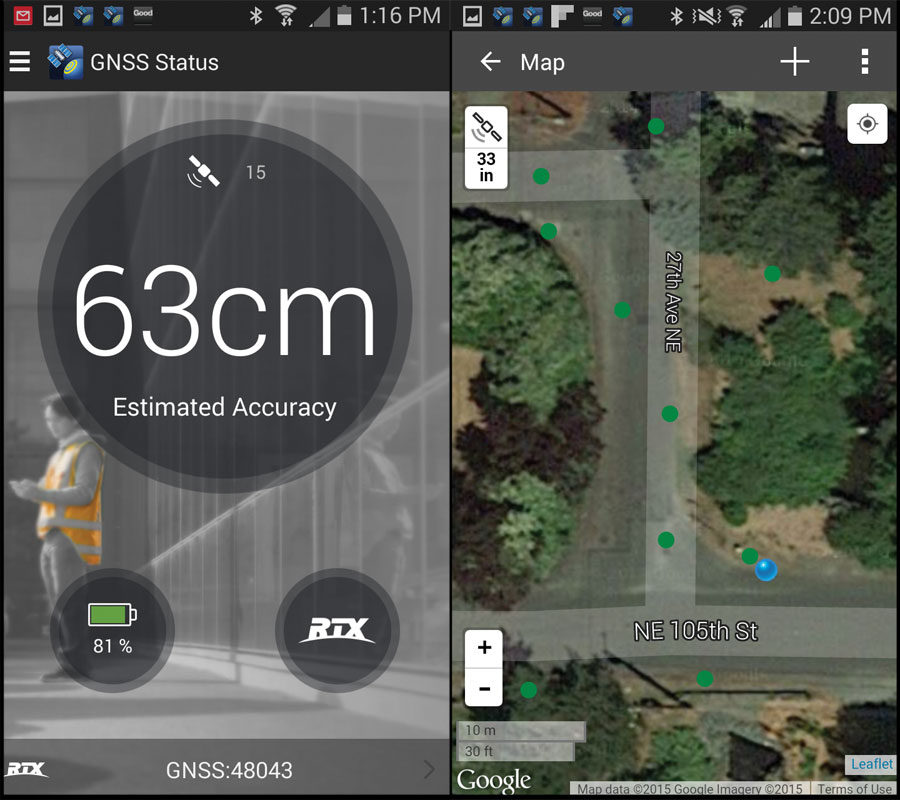 I ran the Trimble GNSS status app to configure and operate the R1; it provided quick as well as detailed status. I did the field mapping tests using the Trimble TerraFlex mapping app.

However, I needed to see the kind of seamless mapping-without-burden type of operations that would be required for broad deployment among folks like field operations crews, asset inventory crews, or drafters/engineers doing preliminary site evaluations. So I ran the R1 while using the TerraFlex mapping app on my smart phone.

I created a mapping task on the online TerraFlex portal (you can import and export many standard geodata formats, even Esri geodatabases), and I created forms by drag/drop into a template with attribute input prompts of data that I’d like collected. This can include automated data (time, date, estimated accuracy, operator name, device ID, etc.), and user-specified mandatory/optional inputs such as ID, type, photo, condition, etc.

I added an RFID tag number that can be gathered with a Bluetooth RFID reader in a “keyboard wedge” mode. This synced up as soon as I opened the app on my phone. I collected the test points, and they synced back to the cloud right away—the software always seemed a step ahead of me. If you have used TerraSync software, you will find this surprisingly and refreshingly simpler and easier to use. (Yay!)

I had a lot of fun with this peripheral, and part of that was the satisfaction that came from being able to see progress towards eliminating many of the frustrations users face trying to find affordable, simple, and task-appropriate solutions for asset mapping. Let’s hope this is only a beginning.