While fertilizer prices have skyrocketed over the past two years, this combination of the two technologies has allowed farmers to increase their bottom line by enabling targeted fertigation that minimizes excessive water and fertilizer use and maintains or increases crop yields. Additionally, the system allows growers and agronomists to make fewer trips to their fields for crop inspections, reducing in-field manhours.

Begun in May, the collaboration between the companies resulted from the small software firm contacting Airbus (www.intelligence-airbusds.com) for help in providing timely, high-resolution imagery to help its clients more effectively manage their crops. Previously, Sentinel Fertigation had extensively used tough-to-schedule drone teams to collect imagery for crop management.

This new collaboration could be less expensive in the long run and promises to continue to offer better results for its farmer clients, Sentinel Fertigation (www.sentinelfertigation.com) officials said. Unlike using drones for these tasks, remote viewing through the company’s platform allows farmers to make fewer trips to fields to inspect crops.

Benefiting from multispectral imagery provided by Airbus, which includes its red edge and near infrared (NIR) spectral bands, growers already are reporting excellent results from the trial run of this tech combo that ran from May to September. Airbus provided the imagery to Sentinel Fertigation by way of an easy-to-use online platform called OneAtlas that facilitates the collection of new satellite imagery from Pléiades Neo to be processed and delivered via the cloud into the N-Time platform.

Sentinel Fertigation’s platform was developed from research done by company founder Jackson Stansell at the University of Nebraska. The company was launched in late 2021. Its N-Time FMS platform was a product of years of combined research done over past decades at the university.

The collaboration of the companies is an early adopter case featuring Pléiades Neo in the U.S., but Airbus has been providing imagery services to agriculture customers in the U.S., France, and other regions for decades, said Darin David, senior director of commercial sales, North America, for Airbus.

“We connected with Sentinel Fertigation prior to the growing season. They’re targeting corn and needed to start imaging in May,” David said.

The past two years have seen fertilizer prices drastically increase. Additionally, excessively and untimely applied nitrogen fertilizer goes unused by crops and makes its way past crop roots and into groundwater. Because of that, Nebraska has an exceedingly high level of nitrates in the groundwater. 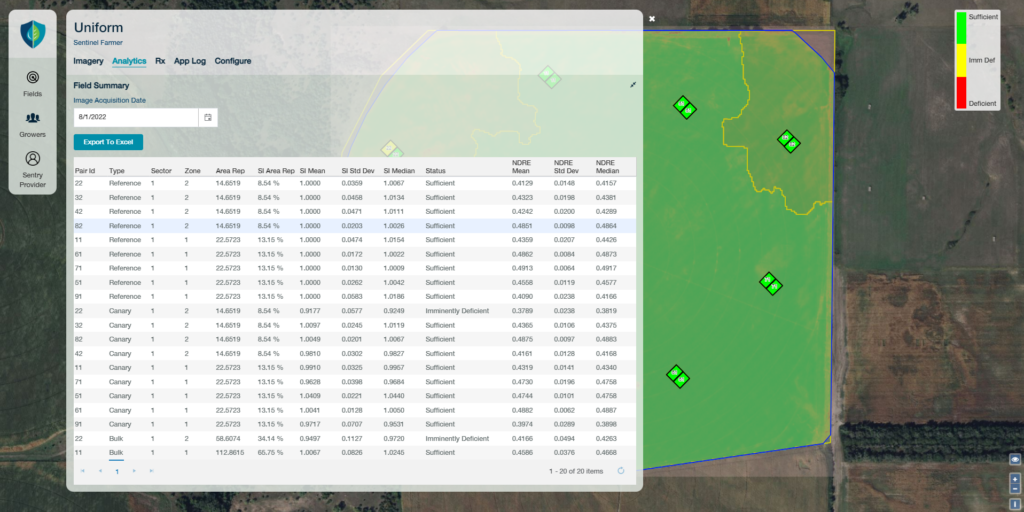 Image from the N-Time platform show the full analytics output using 30cm Pléiades Neo imagery, and provides a view of the insights that are gathered based on the image data.

With targeted fertilizer application enabled by the two-companies’ collaboration, growers are less adversely impacting the soil and groundwater.

Airbus provided weekly monitoring of fields and crops for Sentinel Fertigation using satellite imagery tasking services from Pléiades Neo. The reactive tasking capabilities allows for last minute imaging requests and rapid delivery of the imagery. The results from growers are very good. While 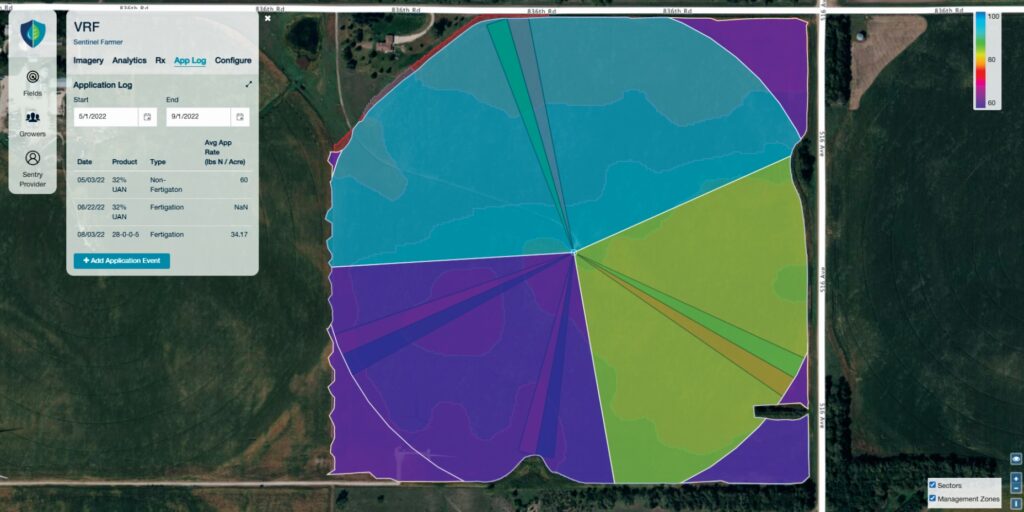 Image from the N-Time platform showing the application log of N-Time from May 1 to Sept 1 and how many pounds of fertilizer used in the given area.

in the past fertigation has been used to feed crops frequently and heavily, this new process saves on fertilizer and water costs by more accurately targeting fertigation applications.

“They were happy with the results. The feedback has been positive. We exceeded on the weekly monitoring of their fields, with a high collection rate,” David said. “Few high-resolution commercial satellites have that red edge spectral content, which is critical for estimating vegetation health and early detection of stress and disease.”

In addition to fertilizer and water savings, this test case has shown the technology also preserves yield potential as a result of being more prescriptive in fertigating crops.

“This application is not specific to corn, this analysis will benefit many kinds of crops,” David said.

The easy collaboration between the companies has helped Sentinel Fertigation make the most of the information it’s gotten from Airbus.

“Airbus has been willing to adapt and mold data sets to what we require as an agricultural company,” Stansell said. “It’s really been an awesome partnership. We’ve had constant contact with their tasking team on new imagery coming in… We’ve been working with other satellite imagery providers, but the Airbus team has been exceptionally responsive. Others don’t provide exactly the right spectral bands at high spatial resolution, which is what led us to Airbus.”

Though the core of Sentinel Fertigation’s technology was derived from unmanned aerial vehicle-gathered data technology, morphing it to work with Airbus satellites is working well, according to Stansell. The information provided is also offering a better value for growers.

Economies of scale and sustainable practices are more important than ever in agriculture, due to increasing prices.

“Fertilizer prices have been at an all-time high. Large corporations and ethanol companies who use agricultural goods are prioritizing sustainable production,” Stansell said. “Here in Nebraska, we have nitrogen concentrations [in the ground] that exceed Environmental Protection Agency regulations… We now can provide more accurate fertilizer scheduling recommendations that help solve these issues.” 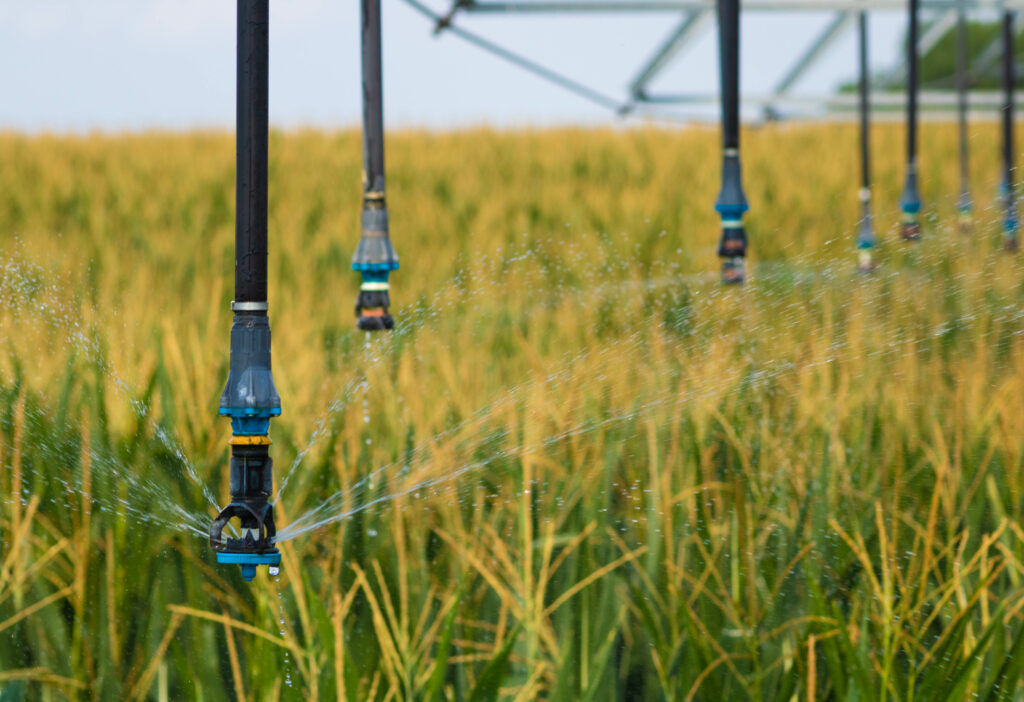 Another benefit of the collaboration is the speediness with which data can be gathered, analyzed, and used by clients. While effective drone teams providing such imagery may take 96 hours or more to turn around the data, Sentinel Fertigation can get such data almost instantly now, with high geospatial accuracy in the satellite imagery.

The increased use of such satellite technology in agriculture has meant more satellites in space to service it and a lower cost for users to obtain it.

“The price of entry has been a restraint for a long time. Now, with more satellites in operation and ease in access, a smaller company can use it,” David said. “Our customers can task a satellite themselves on demand in the OneAtlas platform when and where they need it.”

Of course, too much fertilizer, or too little, affects not just a grower’s bottom line but also the growth of crops. Accuracy in application is paramount.

“The number one benefit for our clients is the fertilizer accuracy recommendations. Since integrating Pleiades Neo imagery, we’ve gotten comments on how much additional information farmers can get—like over-irrigating crops and being able to tell where there are fertilizer skips and planting gaps,” Stansell said.

With this pairing of technologies, fertilizer savings are substantial—about 43 pounds per acre.

“We essentially have a UAV-data quality resource, which can replace drones with something that’s also scalable,” Stansell said.

David underscored the benefit of the technology’s scalability, which neatly serves a logistical pain point.

“Broadly speaking, the ability to scale is powerful. How many sites can a good [drone] crew manage each week as your coverage expands?” David said. “Managing drone crews can become very difficult. Also, drone crews staying put for months at a time is costly.”

“We can revisit any area regularly. We are excited about this use case and want to expand on it,” David said.

Usability of the data collected by Airbus’ satellites is also very encouraging to Sentinel Fertigation.

“The imagery is awesome. Enabling a farmer to identify problems accurately and quickly is a huge advantage,” Stansell said.

Sentinel Fertigation’s grower customers are pleased with the technology and have even reported higher crop yields because of it. This pairing of technologies might well become a new paradigm.

“It’s a game-changer. The data itself is full of potential here. The imagery is as good as UAV imagery and can be captured from space, at scale, and in less than 24 hours,” Stansell said. “It’s as close as you can get to real-time crop management with imagery.”