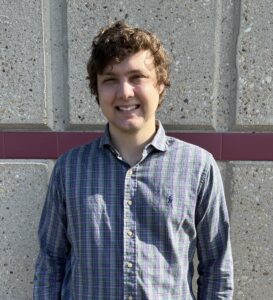 While at Texas A&M, Holliman worked on a case study that showed the potential for satellite imagery to model the discharge rates of larger rivers. The results of this study indicate that the Landsat archive is, on average, representative of the temporal frequencies of hydrological conditions present along Earth’s large rivers with broad utility for hydrological, ecologic, and biogeochemical evaluations of river systems.

For his senior thesis, he performed an analysis on a state data base of local well driller logs and converted more than 20,000 qualitative lithology descriptions into a numeric, four-phase sand and clay classification, which showed nicely in a raster image the distribution of sands and clays for several underground formations in the region.

After graduation he worked at an environmental consulting firm, where he did various GIS work and assisted in writing geologic assessment reports. For the last two years, Holliman has worked at Phoenix LiDAR Systems where he is continuing to grow his GIS experience. He has worked in customer support, RMAs and repairs, and assisted with production and manufacturing operations.

He also focuses on developing the company’s bathymetric lidar data processing workflow, and focusing on the trajectory and GNSS processing side of the business.

In his free time Holliman enjoys gardening, raising fish in an aquaculture setup, playing guitar and drums, flying fixed-wing FPV airplanes, and checking out local breweries in the Austin area.