In the late 1980s, the National Geodetic Survey (NGS) launched a program, in cooperation with State partners, to establish a High Accuracy Reference Network (HARN) across the United States. 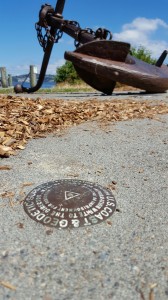 With the rapidly increasing availability and use of GPS equipment, NGS recognized the need to establish a network of high-accuracy, passive survey monuments with reasonable spatial coverage to facilitate access to the National Spatial Reference System (NSRS) by GPS users.

The fist HARN project began in Tennessee in 1986, and the last one was completed in Indiana in 1997. Approximately 16,000 stations were included in this nationwide campaign, and it was the first attempt to develop a truly three-dimensional system that included precise ellipsoid heights.

The epoch date for the California High Precision Geodetic Network (HPGN, instead of HARN—of course, we had to be different!) is 1991.35. A subsequent, regional densification effort, known as HPGN-D, followed a few years later. Very quickly, whether a HARN or HPGN, these networks became the primary control backbone for federal, state, and local surveyors, geodesists, and other spatial data applications.

Not too many years later, NGS began establishing Continuously Operating Reference Stations, or CORS, and the misfit between CORS positions and those of HARN/HPGN stations was exposed, analyzed, and ultimately aligned, with CORS as control. Although CORS stations were emerging as the primary, high-accuracy access to the NSRS, the use and reliance on the passive HARN monuments in the ground was well established and often preferred by surveyors and others.

As the development of Real Time Kinematic GPS surveying developed, the need for marks in the ground with known positions became even more important for training the system collecting data in one reference system to work in another, localized system. Then came Real Time Networks: another need for points in the ground to “calibrate” to. You can’t use CORS for that.

So here we are in 2017, and HARN/HPGN stations are still of significant importance in many areas of the country. Much legacy data has been referenced to these stations, or various epochs thereof, and they still serve as the common connection for thousands upon thousands of datasets.

When the NGS computed the latest realization of NAD83(2011)2010.00, it was based on a multi-year CORS solution. Then, approximately 80,000 passive survey marks, including the HARN/HPGN that had been included in projects submitted to NGS going back to the early 1990s, were recomputed in relation for the CORS-only positions. So, the passive marks, or at least a more modern subset of them, were pulled along into the latest version of NAD83.

As most of you know (or should know by now), NGS will be rolling out a geometric replacement of NAD83 in 2022. For North America, the reference system will be known as the North American Terrestrial Reference Frame of 2022, or NATRF2022.

Many decisions have been (or will be) made about this reference frame, including what will be recomputed or transformed from the latest version of NAD83 to NATRF2022. For some time, it has been speculated that, unlike in 2011, no passive marks would be included in NATRF2022 or have published positions therein. CORS stations/data would be the only way to access NATRF2022 positions.

However, during a recent NGS webinar on the Blueprint for 2022, Part 1: Geometric Coordinates, Dr. Dru Smith, the NGS NSRS modernization manager, revealed current thinking regarding what, if any, legacy passive marks might be included in the NATRF2022 reference frame, which included addressing a question specific to HARN stations.

Dr. Smith stated that, for now, the intention was to reprocess all projects that had been submitted and accepted by NGS post-1997 for inclusion in NATFR2022, including all passive marks in those projects. The 1997 date was not an arbitrary decision, but rather based on substantial improvements in data collection and quality. A similar decision was made regarding the projects that were included in the NAD83 2011 realization. Therefore, all of the original projects and data collected and processed to establish the original HARN/HPGN networks will not be included in NATRF2022, based on the 1997 cut-off date.

Does this mean that all the HARN/HPGN stations will be left behind in obsolescence? No, it does not. But the ones that haven’t been included in a post-1997 project accepted by NGS will be.

If they haven’t been included in a post-1997 NGS accepted project, does that mean they no longer have value at the regional or local level? Absolutely not. The “Bluebook” process to submit projects to NGS for inclusion in the NSRS is neither simple nor without added cost. I can’t guess how many projects have been done that would have met the standard, procedurally, but were never submitted for this reason (but, based on my experience, the number is substantial, even just in California).

I am not sure how it could be determined at this juncture how many HARN/HPGN stations will make it into NATRF2022 via NGS reprocessing. The question is: Can surveyors (and others) who have relied on them for +20 years afford to wait to see if the ones they need will be included? Or, should local, grassroots efforts be mounted to perform a campaign for submission to NGS through the Bluebook process or the successor thereto (part three of the Blueprint for 2022), to ensure that they will be included in NATRF2022?

Unlike the early 1990s when the HARN/HPGNs were established, geodetic-quality GPS/GNSS equipment is now available in abundance. Volunteer partnerships could be formed among regional or local stakeholders, campaigns could be planned in consultation with the appropriate NGS regional advisor or state geodetic coordinator, and the results could be submitted to NGS in the proper format for acceptance.

This seems ripe for local professional association chapters, county governments, and others to step up and lead the effort, if the importance and concern exist. This effort, in addition to ensuring that your critical passive marks are included in the next geometric reference frame, will also add to the data that will be used by NGS to improve various other products and services for your regions, such as improving the transformations tools from NAD83 to NATRF2022 and beyond.

These discussions should be happening now because the work to get it done will take time. Only locals can decide if it is worth it or not.

“Are HARNs on Death Row?” Comments