*A groundbreaking new service turns your smartphone into a high-precision, software-defined GNSS receiver.

The new Trimble Catalyst is a little hard to describe in terms we’re used to regarding high-precision GNSS. Is it a receiver? Is it a service? Do we really need only an external antenna, a subscription, and a smartphone?

The answer is yes to each, and while there are nuances to consider, my conclusion is that this is a very big deal, not only as a specific solution but also as a harbinger of things to come.

Announced at Trimble Dimensions in November 2016, the Catalyst drew a lot of reactions. Some folks were excited at the prospect that the much-anticipated era of commercially available software-defined-receivers (SDRs) had finally arrived (I am in that camp). Others looked at a simple external antenna plugged into a smartphone and wondered out loud, “Could this thing really work?” Shown above, the antenna is about the diameter of a large cup of coffee.

SDRs have been talked (and talked, and talked) about in the GNSS development community for more than a decade, but with little in the way of actual working examples. I had been skeptical of commercial viability any time soon—until now.

Catalyst is still in the early phases of distribution, but I hounded the development team for a quick demo. Fortunately, someone from their team was passing through town with time for a quick afternoon of testing—and there was enough time to establish that it does work and it works well. It’s not marketed as a replacement for a survey-grade solution, rather more for GIS, mapping and asset work. As far as my testing went, however, it did yield high-precision results nearly on par with a survey rover (at the same locations, time, and conditions). 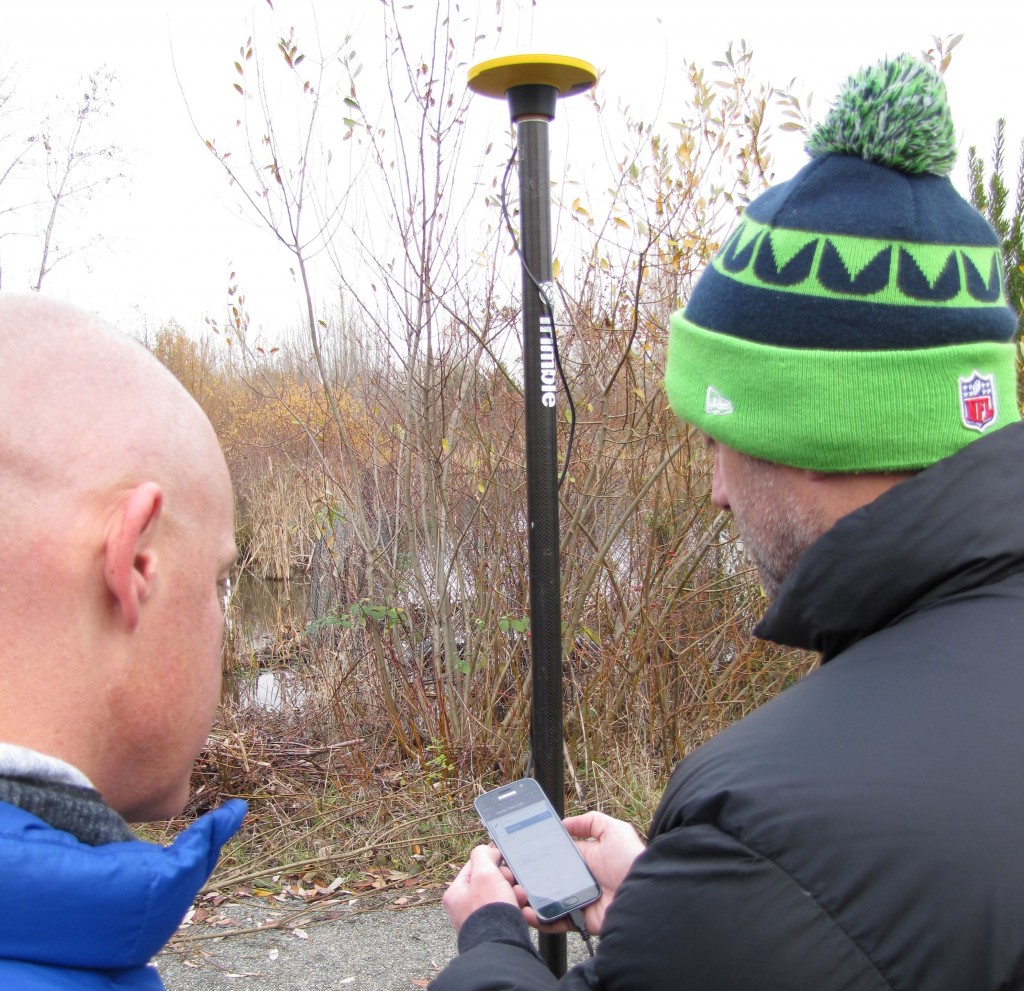 The DA1 antenna is threaded to fit on standard poles and connects via USB-micro to compatible smartphones (in this test, a Galaxy 7). The antenna can get its power from the phone, but there is an auxiliary battery pack for extended use (so as not to drain the phone’s battery).

To understand why Catalyst is a significant step in the development of GNSS solutions, we must look at the subject of SDRs. They are a departure from the architecture of the standard, stand-alone GNSS receivers (rovers) we’ve been using for the past two decades.

A standard receiver is a collection of dedicated hardware, the core of which is an Application Specific Integrated Circuit (ASIC): often a very large chip on the GNSS boards at the heart of standard rovers. These boards typically host several other dedicated hardware components. Each manufacturer has one or more flagship GNSS boards (e.g., for Trimble there are popular boards like the BD970 with a large ASIC on it running their Maxwell technology). Or, an increasing number of third-party rover manufacturers use OEM boards produced by firms like Trimble.

The promise of a future of SDRs is the reduced need for dedicated hardware due to being able to load software onto a wider variety of “generic” processors—like those on your smartphone—and turning those processors into GNSS receivers.

Other advantages over the legacy dedicated hardware units, especially in flexibility, are that new constellations, signals, and advances in GNSS algorithms can be added with a simple software upgrade. This makes the jockeying over how many gazillion channels a receiver can boast a bit moot.

The only limitation is processing power, and it’s likely that smartphone processing capabilities will advance fast enough (or even faster) than changes in GNSS technology. An Achilles heel in GNSS solutions can be an antenna: there are physical limitations. If you are receiving garbage, rife with multipath, you will process garbage. The GPS antenna in your smartphone is (and I think this is the technical term) terrible. A ground plane to mitigate multipath is essential, and size is also a function of the nature of the signals.

There are also Chu limits to consider (i.e., thresholds on how much signal certain sized elements can receive). It can be heartbreaking to see a GNSS receiver hosting great innovation but paired with a tiny or poorly engineered antenna. It was encouraging to see that the Catalyst team put a lot of effort into a decent antenna.

The idea of SDRs is not completely new; software-defined-radios for telecommunications have been in development for decades, and a lot of great work has been done in GNSS SDRs in academia by entities such as the University of Texas and the Universität der Bundeswehr München in Munich, Germany, as well as in the open-source community and by commercial manufacturers.

But this may be the first (mainstream) commercial GNSS SDR. About three years ago, Trimble formed a team to explore SDRs lead by their Westminster, Colorado office, with expertise tapped from team members in New Zealand, Germany, Sunnyvale, and Moscow.

Jason Rossback, Trimble’s marketing director of geospatial field software and mobile computing (who brought the Catalyst for the tests), explained that the team was aiming to build a “receiver-as-a-service” (RaaS). A Catalyst user would subscribe to the software and load it on a smartphone and the only physical piece of hardware they would need to buy would be the external antenna.

A further goal was to keep the antenna under a specific price point because a user would not need to make a major investment to begin working with higher precisions. Rossback  said, “There are so many markets that are underserved, such as developing countries, that could benefit greatly from increased precision but cannot afford the upfront investments, especially for short duration or one-off mapping projects.”

How do the subscriptions work? If you have a smartphone with enough processing horsepower, all you need to do is buy the Trimble DA1 antenna (about $350) and plug it into the micro-USB port of the phone. Presently, Android OS phones are supported, with other OS in the works. We used a Galaxy 7; Rossback said they have successfully tested on Galaxy 6 and 5 models, as well.

You have four levels of software subscription to choose from, depending on what kind of work you are doing. The subscription prices go up with the levels of precision (prices are online at: catalyst.trimble.com):

Okay, how well does it work? Typically, when I test GNSS solutions I visit a National Geodetic Survey (NGS) calibration baseline, and I compare inverses from sets of pairs of observations to the published values. I test at least one mark under moderate canopy, introduce multipath hazards, plus take some static observations with a high-end receiver and antenna as a check.

Catalyst DA1 antenna has an insert for a standard 5/8”-11 threaded pole mount. I attached the antenna to a standard 2m pole w/bipod and wound the antenna cable around the pole to connect to the Galaxy 7. It might be a good idea to take a hardened case for the phone and Velcro that to the pole, but it was simple to just hold the phone and leave enough cable slack.

The antenna needs a little bit of power, and it gets that from the phone, but for extended periods there is a port on the DA1 for a battery pack you can attach to the pole.

We took several dozen observations each on marks about 300m apart. The test app for Catalyst, used mainly for settings and status, displayed a latitude and longitude (WGS84) plus an expected precision (in one sigma). I could immediately see that the values matched my previously derived values (from a lot of testing on that baseline) within a few centimeters. 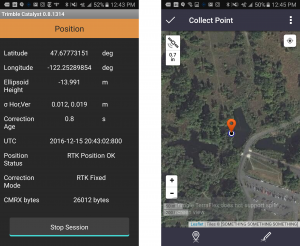 Later, putting the results into a spreadsheet I compared 3D values to the published “mark-to-mark” distances. Inverses checked out to under a centimeter (in the Precision mode). Of course, I would want to do more rigorous testing under more varied conditions, but this was quite encouraging right out of the gate. We connected via NTRIP to a nearby base, using standard RTCM corrections, then switched to RTCM-3 MSM to use additional constellations.

Results were consistent with more rigorous tests the development team had done on their own test courses. Despite the great results, Rossback said they are careful not to oversell the precision capabilities—as results can vary depending on conditions.

The DA1 antenna is a patch antenna with a ground plane, much like most typical survey rover antennas. There are additional hardware elements in the antenna housing; the analog-to-digital conversion is done in the antenna, and there are hardware filter elements. The DA1 is roughly the same size as the Zephyr antenna, or the diameter of the R10 antenna. The DA1 appeared to perform (in the moderate canopy and nearby multipath hazards at the same site) as well as a similar-sized survey rover antenna.

The big question is about multiple constellations. We processed GPS and Galileo, but at the time of testing GLONASS was not being processed. Rossback says that supporting other constellations is a top priority and is expected to happen in 2017. He explained that there are a lot of trade-offs in adding processing for other constellations (such as GLONASS), and these are still being evaluated. GLONASS is a worthy goal as few of the other constellations are in play at this time—though they seem to be launching them at a rapid rate.

What mapping apps are supported? Right now, Catalyst can feed live positions directly to the Trimble TerraFlex asset/mapping app (which we used during the tests). They also offer a software development kit (SDK), which is freely available, and supports Catalyst; the GNSS Direct SDK (same as for their R1 and R2 receivers) is available for third parties to use to integrate their software solutions with Catalyst.

Rossback says they are encouraging new partners to develop function-specific apps, like the Korec Group in the UK is doing for their own mapping app and Precision Concrete Cutting for an inspection app. There is no surveying software at this time.

On the day of the tests I tweeted out a photo of the Catalyst and mentioned we were working on an article about this new SDR. I soon got swamped with inquiries from folks wanting to know more about it (Okay! Here’s the article!☺) It is unique, and likely a first, in many ways: a commercially viable SDR and receiver-as-a-service model, and it performs admirably.

The bigger deal is that the era of SDR has truly arrived, and I can only speculate what possibilities that era might hold.