The intertidal and nearshore zone is among the most ecologically productive and important zones to coastal resource management agencies. However, collecting high-resolution bathymetry in this zone is made difficult by technological inefficiencies and navigational hazards.

Furthermore, the coastal zone is influenced by both terrestrial and marine processes that drive a wide range of changes in morphology and substrate that govern nearshore habitat. Thus, there is need for not only accurately mapping the shallow seafloor but also for monitoring its change over time and space. 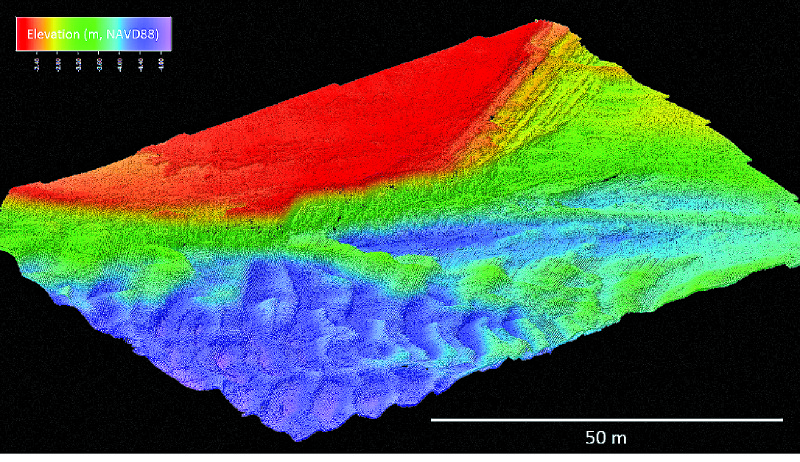 This article describes the outfitting of a shallow-draft vessel with a dual-head, dual-mount (DHDM) multibeam sonar system for surveying in extremely shallow water.

Dual-head multibeam sonar installations and surveys are relatively rare in hydrographic surveying. Due to the necessity for a tight integration with an Inertial Measurement Unit (IMU; aka Inertial Navigation System) and refraction issues relating to water column sound velocity, dual-head systems are typically mounted side by side on a single strut mount or pole using a bracket that holds both heads. Until this installation on the Washington State Department of Ecology’s research vessel George Davidson, the installation of an integrated DHDM multibeam system had not been attempted.

The Washington State Department of Ecology set out to develop a platform for collecting seamless high-resolution topobathymetric coverage along the State’s shorelines. These coastal data are particularly needed along the shores of Puget Sound, with over 4,000 km of shoreline, where the nearshore ecology is largely governed by the terrestrial input of sediment from eroding bluffs that form the beaches and nearshore substrate. 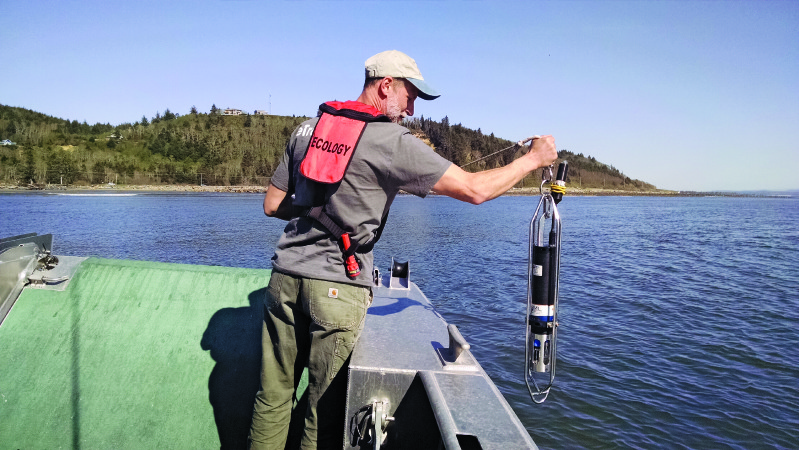 With the area of interest extending from the top of coastal bluffs to the lower extent of the photic zone in water depths of 10-20m, the Department of Ecology Coastal Monitoring & Analysis Program (CMAP) purchased and outfitted a twin-hull shallow-draft beach landing craft for mapping and monitoring the coastal zone. Scientific and management objectives require the highest accuracy and resolution possible in order to detect and quantify changes in morphology and sediment composition and to infer patterns in sediment transport.

Ecology’s 28′ vessel, the R/V George Davidson, was custom-built for coastal zone surveying, including the installation of an Optech Ilris HD-ER laser scanner with motion compensation and an Applanix Position and Orientation System for Marine Vessels (320 POS-MV V5 RTK) IMU-36 on a cabin-top mount to enable mobile laser scanning of bluffs and beaches. 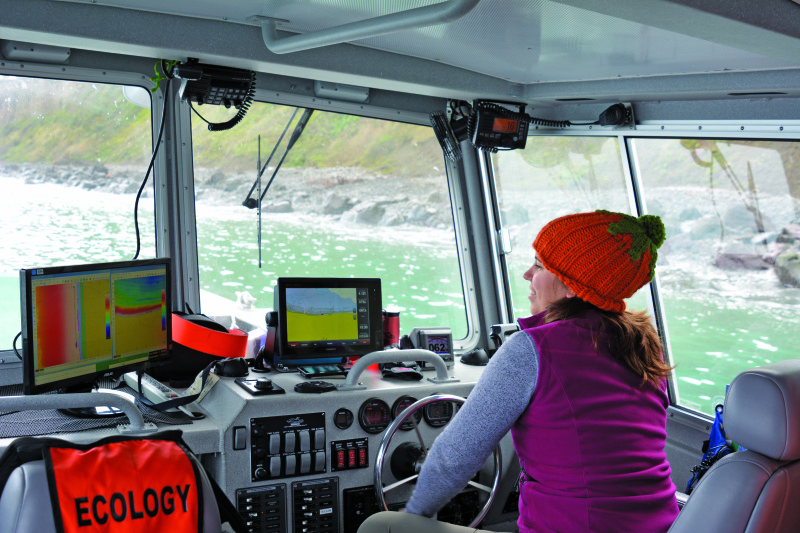 Initially, the vessel was outfitted with a single-head R2Sonic 2022 multibeam sonar deployed through a moon pool along the centerline of the vessel. To increase swath width and improve efficiency of mapping in extremely shallow water, the moon pool mount was replaced with a DHDM R2Sonic 2022 multibeam sonar system with the installation of two side mounts and sonar heads. 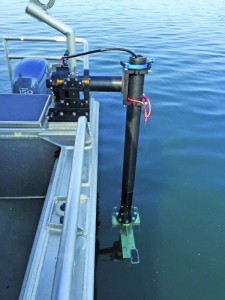 The port side mount with a Simple MEMs sensor attached to the sonar bracket during initial testing.

With a single-head multibeam system and a 120° swath angle for optimal resolution data with minimal refraction effects, the bottom coverage is limited to four times the water depth. In 1 m of water, this means the swath width is only 4-m wide. In the case of the R/V George Davidson, using the moon pool mount in the center of the vessel with a 10-ft beam, a survey with 1 m of water under the sonar head obtains a swath width that extends only 1.5 ft to each side of the vessel.

In order to obtain the highest resolution data, the bottom is pinged twice (initial pass, plus return pass in the opposite direction) such that the outer pings from one pass blend with the nadir pings on the next.

The narrow swath width creates an especially challenging situation for obtaining bottom coverage with 100% overlap. Such a survey requires running tracklines that are little more than a half boat-width apart. And given the need for slow navigation in shallow water and time constraints due to changing tides, the amount of bottom coverage that can be obtained each day in the inter-tidal zone is severely restricted.

Even more important, however, is that with the inherently variable depths and configurations in nearshore morphology, the swath width can vary over every ridge and trough of a sandwave or bedform, making it exceedingly difficult to consistently obtain either the required overlap or to avoid holidays (data gaps) in bottom coverage.

A cooperative effort–among the Washington State Department of Ecology, Universal Sonar Mount Inc., R2Sonic LLC, and Quality Positioning Services BV (QPS, a hydrographic and marine software solutions company)–provided a solution to maximize seafloor coverage and survey efficiency in very shallow water up to 1 m below the sonar heads at high tide. The solution involved two independent, yet integrated, installations (port and starboard) of the sonar heads.

Special considerations had to be taken to ensure extremely tight and rigid installation and performance of the sonar mounts (to minimize dynamic vibrations and harmonics) because a single IMU was being used. The solution also needed to provide forrepeatable deployments (maintenance of precision positioning and alignments) of the sonar during normal daily vesselmaneuvering, includingtrailering and safe stowage of the vessel.

The installation of the sonar mounts took extensive planning, design, and analysis (as well as expert vessel fabricators) to ensure success. Factors included:

It was essential that the sonar mounts provide a robust and extremely rigid mounting solution that is integrated with the vessel and has no independent vibration. In addition, given the navigation hazards inherent to extremely shallow water, it was critical to have an integrated and calibrated breakaway feature of the sonar heads in the event of collision or snag to significantly reduce impact and protect the sonars from physical damage. Moreover, the breakaway design needed to provide for quick, repeatable, and precise resetting and recovery to resume survey operations with minimal downtime.

A thorough assessment of structural support requirements for the side mounts was needed to ensure that the mount platforms would be sufficiently tied to the vessel’s framing and would perform with minimal flex and within the tight tolerance essential for high-resolution sonar data. 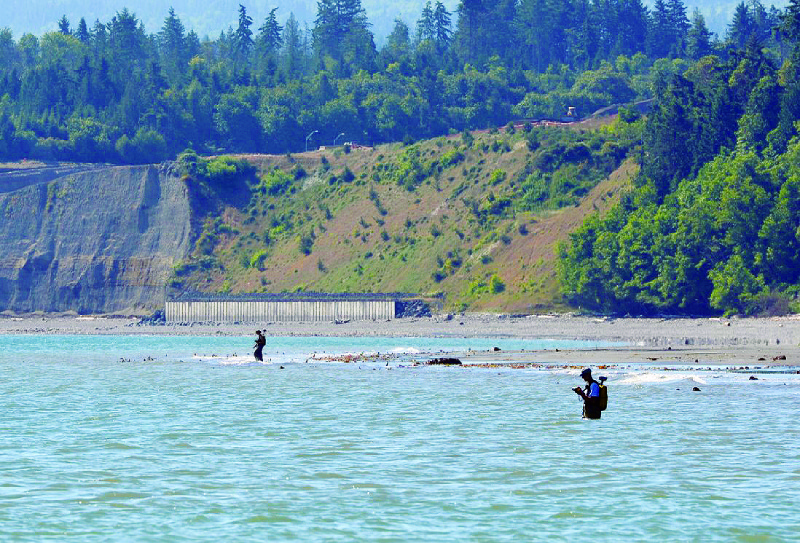 Each of the side mounts was installed on a reinforced gunwale integrated with aft-section rigging lockers, with a 1.5″-thick top plate across the entire top side of the locker. To ensure rigidity and associated sonar performance, the top plate under the sonar mount was further reinforced with vertical members to tie into the transverse and longitudinal substructure framework of the vessel.

The DHM setup conservatively provides seafloor coverage of 6.5 to 8 times the water depth.

Following installation of all the gear, the sonar mounts were set and tested for repeatable alignments, including many deployments of the sonar from their stowed position. Universal Sonar Mount assisted with the final configuration and adjustment of the mounts, development of procedures for stowed and deployed positions, and on-water dynamic load testing with SimpleMEMS sensors in custom under-water housings for recording movement (via signal processing using the Hilbert-Huang transform, HHT) among the different parts of the mounts, the IMU, and the vessel. 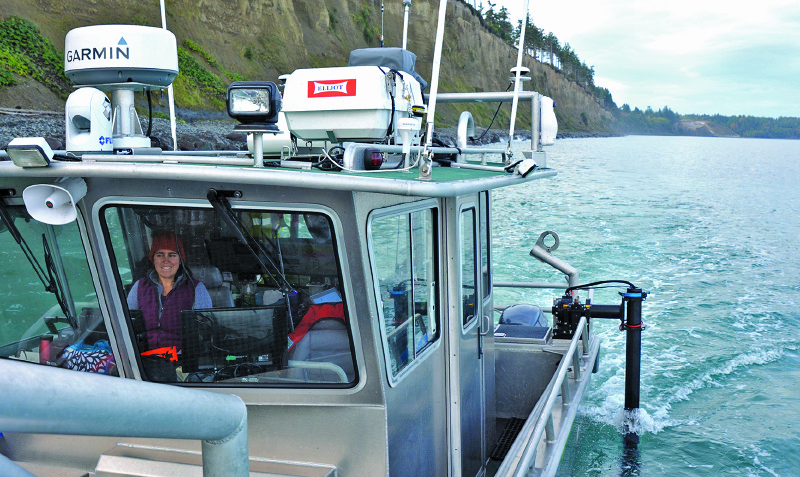 The R/V George Davidson collects multibeam data along the Elwha bluffs, while operating close to shore; the survey team works to obtain overlap of the multibeam coverage at high tide with lidar collected at low tide.

The vessel was then surveyed and calibrated with precise positional offsets of the sonar relative to the IMU. Field tests showed consistent agreement in seafloor depths and positioning of target features.

The R2Sonic 2022 multibeam sonar collects 256 beams with a 1×1° beamwidth at 400 kHz. The beam forming and bottom detection computations are performed internally within the sonar heads. These are integrated with one sonar interface module (SIM), which is the master that ingests all serial data (e.g., PPS, ZDA, TSS1 and SV) from both heads; the slave SIM only provides power to the second sonar head and communicates with the master via an Ethernet cable.

The sonar heads can be operated with either simultaneous or alternating pings. In very shallow water, alternating pings using the same frequency are preferred as the seafloor is easily ensonified to saturation levels. Using simultaneous pinging, the frequency separation depends on the physical relationship between the two heads. In the case of the dual mount separated by the beam width of the vessel, less frequency separation is required than for heads located on a single mount.

QPS QINSy navigation and data acquisition software is used to integrate data streams from the Applanix 320 POSMV 320 V5 RTK position and orientation system and the R2Sonic 2022 sonars. In real time, the QPS swath display shows both raw uncorrected data as well as fully corrected data for motion, refraction, and height independently for both the port and starboard heads, while the sounding grid displays the integrated soundings from both heads along with quality assurance measures such as 95% confidence level and hit count.

For quality assurance, the combined swath solution from dual sonar heads is “ground truthed” with data from overlapping RTK-GPS topographic surveys as well as topographic boat-based mobile lidar surveys, using the Optech HD-ER laser scanner, to ensure integration and agreement between the different systems and data.

The Washington State Department of Ecology is actively collecting nearshore bathymetry data using the DHDM system on several projects, some of which involve repeat surveys for detection and quantification of morphologic change. Multibeam sonar surveys are performed up to the shoreline to the fullest extent feasible as dictated by tide, wind, waves, and other navigation conditions and hazards.

Most projects aim for overlapping coverage with multibeam surveys of the intertidal beach performed at high tide, complemented with mobile laser scanning of beach and bluff or dune topography performed at low tide to obtain seamless coverage across the land/sea interface.

Where conditions do not allow for contiguous overlapping coverage, a bridge between topography and bathymetry is made with ground-based RTK-GPS surveys across the intertidal zone performed to wading depth at low tide.

Data products typically include 0.5-1 m gridded bathymetry and topography, as well as difference surfaces between datasets where repeat surveys have been performed to analyze coastal change.

The success of this DHDM multibeam system is the result of careful planning, analysis, and design; expert fabrication and installation of precision gear; and system integration and calibration.

The DHDM design has greatly increased efficiency and practicability of collecting extremely shallow multibeam data. Compared to the original single head mounted on the centerline of the vessel, the dual heads, each mounted approximately 2 ft to the side of the vessel, have substantially increased swath width such that a holiday is rarely created during a survey. 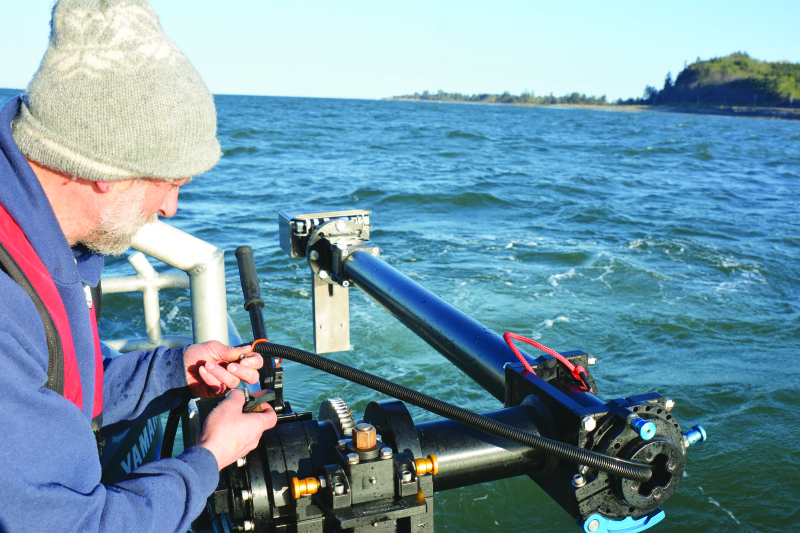 The DHDM setup conservatively provides seafloor coverage of 6.5 to 8 times the water depth. Alternate pinging at 30 Hz in shallow water provides dense and high-resolution ensonification of the seafloor.

Along the shoreline, the beams are electronically tilted toward the shoreline to optimize coverage into shallow water, yet no loss of coverage on the opposite side is experienced. A significant improvement is obtained with coverage while tilting the beams from a side-mounted sonar compared to a center-mounted sonar because the grazing angle is not as severe.

The additional seafloor coverage off to the side of the vessel also provides for safer navigation through detection of obstructions and critically shallow water depth farther from the vessel. Thus far all obstructions on the seafloor have been avoided, but the breakaway feature of the sonar mounts was tested and functioned perfectly when the sonar mounts became entangled in crab pot lines.

Repeatability of the system has been shown to be outstanding. 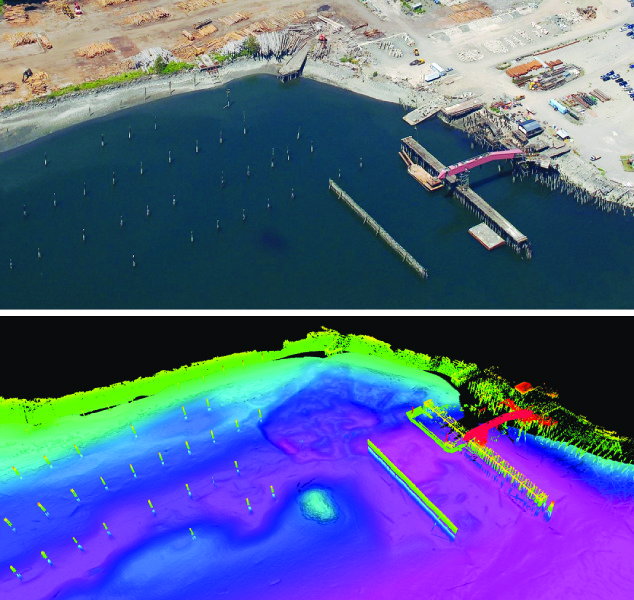