Above picture: Point cloud of full model of castle, shown from the top

I wrote a review of Pix4D’s Mapper software in the November print issue of xyHt; check it out. Here’s Pix4D’s sample project to showcase the power of their software.

They chose to create a model of Switzerland’s most visited site: the Chillon Castle, also known as Chateau de Chillon. It’s an island castle of 21 interconnected buildings located on the shore of Lake Geneva, next to Montreux. It is the result of several centuries of constant building, adaptations, renovations, and restorations and has been around since roughly 1100 AD.

This is a perfect location to test the software because of the castle’s complex geometry, location, and all-around awesomeness factor. The location itself renders mapping a near-impossible feat due to the fact that one whole side of it abuts the open water. How could you possibly map that side of the castle, not to mention being able to accurately model its complex structure with any kind of accuracy? The logistics alone would scare off most consultants.

I imagine if you were able to occupy the adjacent shore, if it was within a reasonable distance, you could set up a long-range laser scanner and let it burn for a couple hours. But you would be at the mercy of any obstacles that might cast a shadow on the castle. You may be able to get in two occupations, tops, with a laser scanner, but the resolution and return would make me very nervous due to shadows, distance, wet surfaces, and angle of approach.

The team began by setting ground control points. They were not allowed to set anything permanent because it is a historical site, so they had to use natural features on the building and grounds that could be easily located in the photos. Eleven ground points were initially located with a Trimble R10 GPS unit set to RTK mode. Each point was measured twice, many hours apart, to receive data from different satellite constellations, thus making the coordinates more accurate.

A Trimble 5601 total station was then used to occupy the GPS ground control positions. Using the total station they located certain geometric features that could easily be found from a majority of the photos. These features were the most important since they will be used to tie together multiple sections of photographs.

Georeferencing the exterior of the castle is relatively easy with open skies and long sight distances. Try to move control into interior courtyards and hard-to-see areas, and you’re talking about hours of traversing and special permissions into those private locations. Using inter-visible objects, though, can easily carry control into those hard-to-reach areas: objects like the spires on the very top of the roofs or high window corners, basically anything up high.

With the control set up, the crew was ready to get to work. The equipment they used was easy to acquire: reasonably priced camera gear. That gear included:

The Canon 6D and Sony Alpha were used in the interior of the castle. The wide-angle lens is very important because it picks up much more of the scene and creates greater overlap between the photos. The Phantom 2 Vision UAV was used inside the five courtyards and also the exterior of the castle on the land side and the more difficult water side. On the water it was dispatched and piloted from a boat, while the onboard camera was set to take pictures continuously every one second.

The GoPro was used to take exterior photos and was also set to capture images every one second. Each photo was taken with the intention of overlapping the next by 80%-90%. This was to ensure a very tight model with plenty of local control to stitch the photos together and also to bring control into the interior of the castle.

When all was said and done a total of 5,225 images were taken of the castle. 100% of the exterior and about 50% of the interior was mapped. The amount of time it took to complete the field work: four hours! Granted, there were four people working on it, but that is still an incredible amount of data to gather in one morning. 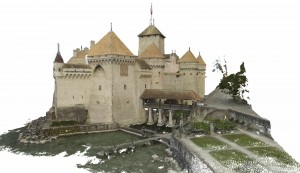 Point cloud of full model of castle, shown from the front

Working with the Data

With all the fieldwork finished it was time to put the Pix4D Mapper to work. The software workflow is a pretty straightforward process. First, you break the castle images into small workable chunks that can be easily stitched and georeferenced. Next, you start merging those small chunks together into a few larger chunks, each time performing QA/QC separately. Do that a few more times, and pretty soon you have a fully stitched survey-grade model of the interior and exterior of the castle.

The accuracy on this particular project is claimed to be about 4 mm to 20 cm depending on the camera used. The software is stated to be fully automated and requires little user input.

“What we did not know before (and that was part of the exercise) was the following: What will be the best camera/lens that has the best relation of accuracy and acquisition time? Now we know that a fisheye lens with a 12-14mm (not a full 180 degree fisheye) has very good properties in that sense. To optimize even more the acquisition and processing time, next time we would use a camera rig of two or three cameras with 12mm fisheye lenses.” 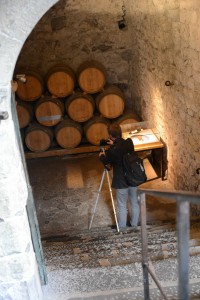 Data acquisition in the cellar of the castle with a Canon 6D equipped with a fisheye lens, on a tripod (image taken every 2 meters)