Above: This bridge in Baltimore took 1 hour and 45 minutes to scan: 550 feet of roadway or 1.5 acres, including all the beams for the underside of the bridge for clearance and engineering design.

As I stood in a courtyard of the Walter Reed National Military Medical Center on a summer day in 2007, my career changed. This was my first time using 3D laser scanning on a project.  At this time, the term “reality capture” had not yet emerged. It was not an instantaneous change, but I had the sense that I’d just taken the first step on a road that I could never return from.

Seven years and several technological evolutions later, I firmly believe that the laser scanner and a host of newly emerging reality capture technologies will be the instruments (pun intended) to bring about the demise of the dedicated field crew.  Doubt that claim?  Let’s examine the state of the technology in late 2014.

An essential element for any reality capture device is non-contact, 3D photo-realism.  We are getting only a very myopic view of reality when we play connect-the-dots with traditional point-by-point topographic surveying. The remote-sensing aspect of reality capture allows a wealth of 3D measurements to be gathered almost instantaneously.

When it comes to 3D laser scanning, a major paradigm shift has occurred in the emergence of targetless registration. This new development is exciting and logical. Just as total station observations are typically more precise than GNSS observations for standard site control, point cloud registrations are typically several orders more precise than standard site control. This eliminates the need for targets used solely for registration and minimizes the targets needed for geo-referencing, therefore maximizing the effective scan time. 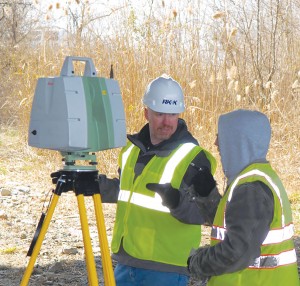 The author and one of his party chiefs scan the underside of a bridge for a bridge improvement project.

A productive goal of 100 scans per day is ambitious but reasonable. This yields field locations of 10 acres per day or 3,800 feet of streetscape in a suburban or urban environment, with far greater detail and safety than could be achieved with point-by-point surveying. This equates to a four- to five-times increase in field productivity versus standard total station instruments.

Conversely, the office time for registration and data extraction dramatically increases to an average of 40 hours (one standard work week) for 100 scans. There are variables, of course, including the complexity of the site and the desired level of detail from the scan extraction. A general building shape is less time-consuming to model than mapping each brick and mortar joint—something that is not even a consideration in point-by-point survey.  Again, the target here is the typical survey.

Therefore, one may surmise that the office-to-field ratio is 5-to-1 for laser scanning, placing a greater demand on the office staff while drastically decreasing the need for field staff. Additionally, experience has repeatedly proven that there are definite performance gains when the individual performing the cloud registration and data extraction is the same individual in the field performing the laser scan. This essentially removes all topographic surveying from the responsibility of a dedicated field crew.

Land surveying is a small industry. IT CAN, however, greatly benefit from other technology initiatives.

There is active development to decrease the size, weight, and cost for laser scanners for use in self-driving vehicles and for placement on small, autonomous, unmanned aerial vehicles.

There is active development to decrease the size, weight, and cost for inertial motion units using technology such as cold-atom interferometry or microelectromechnical systems (MEMS) to provide better positional accuracy for self-driving vehicles, autonomous unmanned aerial vehicles, and smart phones.

There is active dialog regarding policy change throughout the United States for the use and operation of small, unmanned aerial vehicles for applications ranging from parcel delivery to crop monitoring to emergency response to, yes, topographic mapping.

There is active development in the enhancement of the GNSS signals to extend positioning to indoor and underground environments for small, autonomous, unmanned aerial vehicles, smart phones, and emergency responders.

These are not dreams of a future that will be unrealized; these are active programs set to enhance our near future.

What impact would that have on your business?

Laser scanning is not the only reality capture available to the modern surveyor. Close-range terrestrial photogrammetry is emerging as another tool in the reality capture toolbox.  This can come in a variety of forms such as the Autodesk 123D Catch software or the Trimble V10 imaging rover that includes a camera array on the rod for spherical reality capture.

So far, this example has included only terrestrial laser scanning where the instrument is moved from scan to scan.  Placing a reality capture device on a mobile platform, whether it is airborne, water-borne, or a ground-based, yields even higher field results with a 10-to-1 or 20-to-1 office-to-field ratio.

What does the future of field data collection hardware look like for 2015 and beyond?  Smaller.  Faster.  Cheaper.  Programmers are working tirelessly on automated, targetless cloud registration, improved close-range photogrammetric precision, and automated feature extraction from reality capture images and point clouds.

The culmination of these technologies will be a world awash in high-precision, high-accuracy positioning.  When that happens, dedicated field crews will be obsolete. When that happens, only the field technicians who can adapt to the office environment will remain. Likewise, office staff will need to adapt to the field environment. The line between the two will no longer exist. We are close, so very close, to the end of the dedicated field crew.