This entry is part 7 of 8 in the series January 2014
Hardware and software purchases are two of the largest expenses, outside of personnel, for surveying professionals. There was a time when a surveyor could purchase a high-quality instrument and expect to use it for a decade or more. When I was first sent out to perform field surveys, I (as the new guy) got the oldest equipment. I remember turning angles with a Wild T2 theodolite that was only two years younger than me! However, those days are no more.

The dramatic advancements in efficiency and the addition of new features and technological integrations have changed the field of surveying forever. With a modern laser scanner I am collecting more points per second than I could in a year of manual surveying. I am a bit of a tech geek so I love all of these advances. However, I cannot ignore the effect that this is having on the business side of my profession.   This ever-increasing rate of advancement and improvement renders hardware and software purchases obsolete faster than ever before. Managing these assets in a way that ensures an achievable return on your investment (ROI) is crucial to maintaining a profitable firm. I think we can all agree that at some point upgrading hardware and software ceases to be an option. Whether this point comes about because you can no longer afford not to upgrade or because the market demands it depends in large part on how you managed the upgrade last time around. 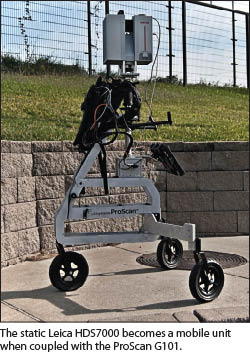 The goal is similar to playing the stock market. You want to hold on as long as possible to wring the most profit, but not a moment too long or you start giving that money back in lost productivity and missed opportunities. Let’s take a look at some of the variables to consider when new hardware and software purchases are on the table.

Sometimes you don’t get a choice when it comes to software. If your clients demand deliverables in a particular format, you have to have the application that authors or converts to said format. However, those changes seem to occur far less frequently than the yearly updates we see in the software world. So, let’s talk about when you do have a choice. For most major software platforms it is less expensive to stay on a maintenance package and receive automatic upgrades than to purchase them outright. This may not be the case if the software is used to produce work product and not the final deliverable, as you can typically run on older versions when work is for internal use only. If what you’re working on is the final deliverable, it comes down to features and interoperability. Will the new feature(s) increase your profitability enough to justify the expense? Perhaps it will on one type of project but not in the aggregate. In that case you may be better off leasing the newest version for that project but waiting to upgrade the shop as a whole until next year. Most manufacturers offer leases ranging from one week to three months long. This lease can be billed directly to a project, and it is also a good way to gauge the usefulness of a new software application prior to the purchase of a full license.Another concern is interoperability. None of us works in a vacuum. We have a collection of hardware of varying ages from various manufacturers and processing software in the same condition. Our success is predicated on all of it continuing to talk to one another. The place I trip up the most is in firmware upgrades to hardware. Quite often, this will have a trickle-down effect on my software. Be sure to run any considered changes through your entire workflow—field to finish—before signing on the dotted line. Speaking of working in a vacuum, it’s a good idea to talk to your biggest clients, subcontractors, and suppliers, as well. Are they upgrading? Will their decision(s) cause a problem in your established workflow?My last software consideration has to do with the skill set of your personnel. When it comes to survey data, the point cloud has opened up more applications to us than any one person could possibly master. The best way to secure an ROI on a piece of software is to use it to its fullest extent. The time and costs associated with training your personnel to master an application have to be factored into the cost. Given the depth and complexity of some of these applications, specialists are popping up who just concentrate on what they do really well, be it Revit or ArcGIS or 3D Studio Max. Developing a network of these specialists can be a great way to have the best when you need it without trying to maintain tens of thousands of dollars in software that you barely know how to use.

While total stations and GPS units typically have a lifespan of marketability that’s more than five years, I would argue that the purchaser of a new top-of-the-line terrestrial laser scanner (Leica P20, Z+F 5010C, Faro Focus X330, etc.) can expect two to three years of billable use before it is superseded by a new unit that renders it unmarketable. That doesn’t mean that it will stop working, just that you are going to have a hard time winning a project when you are basing your field costs on scanning at 50,000 points per second while your competitor is doing so at 1 million points per second. The Apple pricing model seems to have been adopted by most of the manufacturers, so that when a new model is released it is at the same price as the previous “best” model with additional features and improvements, making it a “better” value. Added competition has reduced the prices a bit in the last two to three years, but they haven’t moved much over the past decade. For the most part, speed and compatibility are the variables here, but there are many other things to consider. First of all, can you afford it? Given the two-to-three-year lifespan and current market rates, you are going to need at least 100 billable days per year to get your ROI. Start by planning an ROI schedule.  This is not a schedule based upon “How long will it last?” but “How long will it be marketable?” Timing is everything, so the first thing to look into is the historic release schedule of the manufacturer. While there are no hard dates, it is easy to see if a particular manufacturer typically releases a new piece of hardware every two years, four years, or whenever. You need to know where you are in that cycle, as that will have a dramatic effect on the length of time available to achieve an ROI. If you are later in the cycle, you may need more than 100 days per year to be in the black.  If you need the hardware but don’t have that type of work load, you may be better off using short-term leases or subcontracting the work to a scanning specialist.If this is a replacement piece, check with the manufacturer or reseller to see if they are accepting trade-ins for new equipment purchases. These are rarely advertised publicly but are generally available if you stay with the same manufacturer for your upgrade. Alternatively, you can look to the pre-owned market. You can usually find previous-generation hardware available for pennies on the dollar. However, it’s up to you to make sure it’s in good working order, so insist upon a recent calibration certificate or have it serviced by the manufacturer as part of the purchase price. While we are looking at timelines, consider what you plan to do with the equipment when it is no longer the “latest and greatest.” Reselling it used can help recoup a bit of cash. If you need a tax break, you may do better donating it to an institution (school, law enforcement, etc.) and taking the write-off with a bit of good press. Alternatively, we are seeing mobile scanning systems being introduced that use off-the-shelf scanners (Leica Pegasus, p3dSystems ProScan). These can be viewed as accessories that extend the usable lifespan of some scanners. The last variable to consider is your personnel cost. Skill to do comes from doing, and you have to be honest with yourself about the non-billable hours that will be needed in order to train your personnel to effectively use any new system.  Hardware and software investments are a value proposition. The question is, “Who is receiving that value?” As such, it is important to consider any new purchase from your client’s point of view as opposed to the manufacturer’s. A tool may be smaller, lighter, faster, more accurate, etc., but the market rates for the jobs you are going to perform with it are not going to increase because you have to work less to complete them! Your delivery times may improve. Your out-of-pocket expenses such as hotels and per diem may decrease as your field times do. You consistently get more value per dollar with your ability to perform more work in less time. But, as I said, you will still be paid the same. The added value comes from being able to complete more projects in a given time period. Don’t forget to consider how you will fill that time in order to set aside enough profit to upgrade when the time comes around again.