The 24th bi-annual meeting of the Surveying and Geomatics Educators’ Society (SaGES) took place at Tyler Junior College in Tyler, Texas, June 16-20, 2013. This year it was combined with a FIG (Federation Internationale des Geometres) 2013 regional conference as an integral part, for the first time. The meeting was hosted by Patti Williams and Willace Johnson, both instructors in the Tyler land surveying program. For readers who have not been to East Texas, this is a beautifully scenic part of the world.

The SaGES group had its original meeting at Rainy Lake, Minnesota in 1937.  Out of that get-together, meetings were planned to be every five years and were, more or less, until 1971; then every three years, more or less, until 1993, at which time they began to be held every two years, and have been since.Professor Robert Schultz of Oregon State has reported several times in this magazine, and in 2005 included a succinct and well-researched history of which this is a brief recap.  Professor Schultz included a notable observation that the initiative to create the ACSM came out of that 1937 meeting. 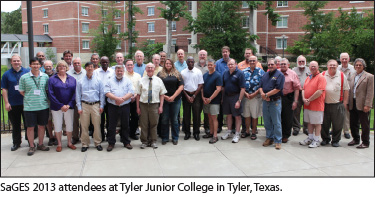 For 36 years, from 1971, the group operated as an entity without any formal existence beyond the desire to meet and share ideas important to the furthering of surveying education. The meetings themselves (whose name varied from event to event) were the group’s core identity. This modus operandi worked and never showed signs of weakening. However, with the surveying profession and its other professional groups in a state of rapid change, the attendees at the 2007 Ferris State, Michigan, meeting resolved and acted to create a non-profit organization and settled on the name Surveying and Geomatics Educators’ Society, with the case-sensitive acronym, SaGES.Since 2005, the meetings have taken place during (or are planned for) June or the summer in the following locations:

The meetings are typically four days long, with attendance between 20 and 50. The group makes an effort to keep costs affordable, since most attendees have limited resources, and the meetings have been informal.  Peer pressure dictates no neckties—shorts and Hawaiian-style shirts being closer to the norm.

Lodging this time was in beautiful Ornelas dorms, and most of the meals were catered locally and served in the dormitory meeting area. As in meetings before, the sessions in Tyler were filled with presentations on new technology, surveying principles, teaching techniques and trends.  One morning was devoted to cadastral surveying in Texas for non-Texans (and Texans, too).  Individual talks are short, 20 minutes each, the recommended attention span well-known to teachers. However, if anyone wanted to know more afterward, there was time to ask during social times. One example of a presentation title to typify the meeting is “Riding the Wave of the Next Revolution: Intelligence and Meaning in Measurement Processes as a Paradigm of Change.” The title sounds abstract, but a 20-minute program presented by professor Bill Hazelton from University of Alaska, Anchorage, is anything but abstract.For years, the meetings have included at least a half day in a purely recreational group activity. This year one day was devoted to a trip out of the piney woods of East Texas into Dallas to taste some of Texas’ finest traditional cuisine and visit local museums and other downtown attractions. On the return trip to Tyler, the bus stopped to allow for an open-air country music dinner at the tiny town of Ben Wheeler, west of Tyler.

Meeting Themes Then and Now

The need for surveying, mapping, and geomatics educators to network has remained constant, even with changing methods and missions. Distance and online education are topics in the forefront of discussion nowadays, but they are not yet the major educational delivery model.  Nearly every degree program represented at the meeting is still in the classroom and lab, with daytime and evening classes.  More common than distance education is the use of web resources and hybrid course delivery (online lesson material that may be used in or outside the classroom).

College program accreditation was an important theme at this meeting, with a full afternoon dedicated to it. Steve Frank (New Mexico State University) and Amanda Reid gave a workshop on ABET, the lead educational accreditation board for engineering, technology, and applied sciences. Many two and four-year surveying and geomatics programs reside outside of engineering departments, and ABET has evolved to accommodate the change, using applied science criteria rather than engineering.College education, especially career and profession-oriented education, has been moving for years in the direction of outcomes-based instruction and grading. This means that courses are designed to assure that students attain to stated learning goals, more specific than and not just the ability to do well on written exams. ABET now expects programs to define their own learning goals and prove that they are following through with them using good assessments (exams, student surveys, demonstrations, projects) and to improve the students and the program.ABET accreditation continues to be well-recognized by the states’ boards of registration.  ABET’s challenge is to keep plenty of evaluators available to meet the needs of new and renewing programs.  Both educators and licensed persons are welcome to consider volunteering.

Of course we need more new, promising entrants into our profession.  All attending agreed that our educational programs look for the magic enticement, which might have to be a popular prime-time television show about surveyors.  Short of the TV show, certain marketing techniques seem to be the silver bullet for a while, but the only continuous theme is that marketing is plenty of work. Self-identity is part of the equation, both who we represent ourselves to be and who we truly are in our college classes and our professional practices.  In recent years, geographic information systems (GIS) has found its place in the sun as an appealing career, but the light doesn’t shine automatically on geomatics, too.

Wrapping Up and Planning Ahead

The fourth day of the conference was the business meeting, which included the decision to meet in Oregon in 2017. But business went far beyond the basics into consideration of SaGES’ relationship to other professional groups, especially NSPS. Educators have the self-evident role of being big contributors to the peer-reviewed journal, Surveying and Land Information Systems (SaLIS), which is an online-only publication of NSPS/AAGS/GLIS.  Although, with no known exceptions, the educators present regard ourselves as educators first, we also need to be leaders, innovators, and learners, and we care deeply about the future existence and quality of SaLIS.  The officers of SaGES agreed that we must do whatever it takes, within reason, to help NSPS bolster SaLIS by increasing the number of high-impact papers in it, improving online accessibility, and raising its recognition level as a journal.

The next meeting, in 2015, will be at the University of Maine, in Orono. As Professor Schultz pointed out in 2005, many good friendships have developed, and those who attend only once have been welcomed. As a group SaGES encourages the faithful core (yes, there is an executive committee), and it encourages new attendees, including those who are not teachers. The SaGES 2013 meeting was as good as any of the six this writer has attended. It ended with an enthusiastic thanks and ovation to Tyler Junior College, Patti Williams, and Willace Johnson, who organized a high-quality, affordable meeting. Last, but not least, the Texas cuisine—slow-cooked barbecue and brewed iced tea—were to die for! And, as this is an education themed article, we wanted to make you look up that Latin phrase as homework.

Read how the SaGES mission has grown over the years in past PSM articles: