This entry is part 6 of 7 in the series March 2014
Monitoring critical infrastructure above the world’s largest tunneling machine in Seattle involves overcoming seismic, geotechnical, and historic challenges.

Seattle’s SR 99 Tunnel Project, which will provide a traffic bypass under two miles of downtown Seattle, employs Bertha, the largest-diameter tunneling machine ever built. Folks can follow the progress of Bertha with her own twitter feed (@BerthaDigsSR99), but more technically, the progress of Bertha will be tracked by an army of monitoring engineers, technicians, and surveyors using a combination of some of the most precise and innovative tools and methods ever marshalled for a project of this scale.Bertha, fondly named after Seattle’s first woman mayor, Bertha Knight Landes, weighs in at 7,000 tons, is 326’ long, and is 57.5’ in diameter. The two tiers of the tunnel—two lanes each way, one above the other—will be housed within the inner 55’ of the tunnel. Curved pre-cast sections of the tunnel are automatically snapped into place by Bertha as she progresses under the city.  Bertha will reach a maximum depth of 200’ below the surface during an expected 14 to 24-month dig. This is not a simple tunneling project. The downtown Seattle corridor is subject to various types of settling and tectonic movement. The tunnel will replace the aging Alaska Way Viaduct, plus there is an unrelated sea wall upgrade going on nearby.

The Team and the Challenge

The team of contractors, dubbed the Seattle Tunnel Partners, is led by Dragados USA, which has experience with massive tunnel projects worldwide, with much of the surface and utility monitoring being performed by Soldata. The team has also enlisted the services of local firms. In addition to the conventional techniques, there is a seismic component and a geotechnical one, and a very complex and innovative system for monitoring the impacts that the tunneling may have on historic buildings and critical utilities. 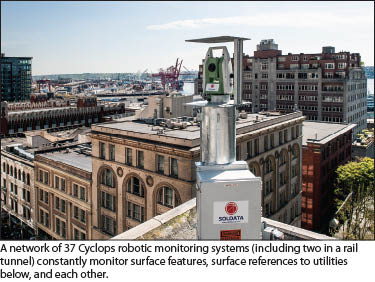 A “plough wave” effect above tunneling activities of this scale can displace surface structures, including buildings and utilities. While most of this displacement is subtle, even displacements of millimeters must be detectable in real-time to preserve integrity of critical utilities and structures. Some estimates of the value of the infrastructure above the tunnel route range in the billions of dollars.  Key monitoring is being performed by Soldata, a company that has perfected their craft on similar tunnel projects in Barcelona, Amsterdam, and other sites worldwide. Soldata has deployed an array of robotic total stations integrated with other sensors on buildings along the tunnel path. These sensors, dubbed “Cyclops,” check in with each other, perform a 3D least squares adjustment to mitigate for any incidental movement of the mount or building, and then run automated series of observations looking for deflections of critical structures and utilities. Soldata has also pioneered new ways to use satellite-based INSAR (radar images) to perform on-going surface change detection.

A total of 158 buildings and nine “special structures” (tunnels, bridges, or ramps) are located within the construction monitoring area of the tunnel excavation. Most of these structures are monitored continuously using AMTS (automatic motorized total stations), also known as robotic total stations. Each AMTS system is composed of reference targets (3D precise reflective prisms), monitoring targets, and a complete data acquisition/transmission/control box. About 99% of the time, the AMTS is located within the area of influence of movements, so in order to obtain absolute movement information, the AMTS shoots reference targets installed outside of the anticipated zone of influence (ZOI) of the tunnel excavation at the beginning of each cycle to correct the position of the AMTS itself. It then measures all the monitoring targets one by one. Depending on the needs or specifications of the client, Soldata has been able to incorporate total stations of different brands into their Cyclops systems for different projects. 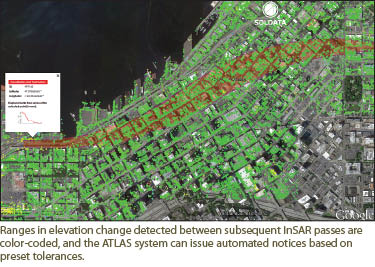 The accuracy of the system does not solely depend on the angular accuracy of the hardware itself (generally 1” or 0.5”), but also on the power of the least square adjustment used at the end of each cycle. After all, there may be incidental movement of any structure within the ZOI, and this must be taken into account before each cycle. An accuracy of 1mm at a distance of 300’ can be achieved in most cases for an hourly data collection frequency. In most cases in urban environments, as it is the case on the SR 99 Tunnel Project, it is sometimes impossible for an AMTS to have access to reference targets outside the ZOI, simply because of line of sight obstruction due to the density of buildings. In this case, Soldata uses its proprietary Cyclops software to enable several AMTS to work as a network, not separately. The power of the algorithms allows consistent accuracy no matter how many AMTS are working together in the same network. On the Alaskan Way Tunnel Project, 35 AMTS will be installed on the surface and two inside an existing BNSF (rail) tunnel located above the tunnel alignment. More than 750 targets are monitored by these devices. In addition, Soldata is using the reflectorless capabilities of the most-recently integrated AMTS to monitor the road surface without installing prisms. This application has been used in Europe for several years on urban tunnel projects and has become a standard. It was first used in the U.S. on the Port of Miami Tunnel Project in 2012. As the same AMTS can monitor 3D prisms and the road without the reflectors, this application usually results in great benefits for all the project players. 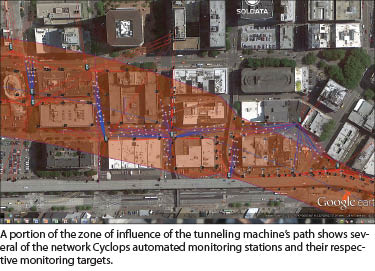 This technique, based on synthetic aperture radar (SAR) “images” (not visible), has only been recently used on urban tunneling projects, but it offers a wide range of benefits. The main and original use of the technique is InSAR (interferometric synthetic aperture radar): engineers are able to monitor relative movements and displacements, sometimes to half a centimeter, over very large areas, like an entire city. In addition, another technique helps to approximate the level of precision required for urban monitoring projects: persistent scattered InSAR (PSI). Precision is improved by focusing on highly reflective points on the image, such as corners of buildings. Soldata’s ATLAS technique is a combination of both techniques, and the relative verticle precision of the method is now close to 3mm, which is usually more than acceptable for tunnel projects. Obviously, this technique does not replace real time monitoring of movements as the frequency of readings depends on how frequently a satellite goes over the same area (usually about two weeks between observations). But there are numerous advantages, because the size of the covered area goes well beyond the traditional scale of zone of tunnel excavation ZOI (in this case 15 miles x 15 miles), and the monitoring does not necessarily require any site installation or references: two of the most complex problems to resolve in an urban environment. 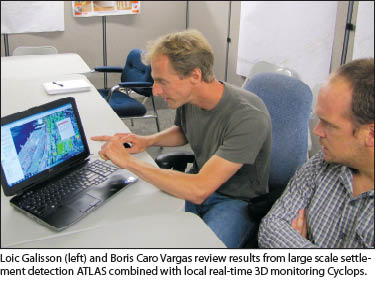 In typical urban environments, the density of points is generally around 10,000 points/km², which makes it an extremely cost-effective way to monitor settlement. Another advantage is that the data is available long before the construction even starts (as far as the satellite images exist), which can be useful to verify that settlement was already happening before the start of the project. All these aspects make it an attractive tool to mitigate any possible litigation beyond the ZOI where no comprehensive monitoring is in place. It can also be used to create a baseline of conditions before the start of the construction for the same reasons. The satellite provider may have many months or years of images available for the period prior to construction, and time series can be developed to look for seasonal or other changes that might continue to affect the same site. During the dewatering process of the south portal (entry point for Bertha’s boring operations), the InSAR was able to detect subtle subsidence of some ground sections. On the Alaskan Way Tunnel Project, InSAR is used to detect any potential settlement beyond the anticipated ZOI and compliments the more localized real-time monitoring performed with Cyclops. Studies have already shown a good correlation between the techniques so their results can be combined to provide redundancy.

The amount of sensors and the density of monitoring on urban tunneling projects is increasing project after project. On the SR 99 Tunnel Project, there are more than 5,000 data points (including geotechnical, structural sensors, and traditional monitoring points). In addition, the data often has to be available as soon as practically possible, meaning data collection frequency is increasing. The combination of both factors creates an exponential growth in the amount of data that has to be collected, transmitted, processed, and reported. Having the latest monitoring hardware is of no use if the way the data is reported is not reliable. Moreover, there is a trend on every new project to integrate the data from all the different sources, whether it is survey data, construction data, monitoring data, or quality control data. The project players want to be able to visualize the information on a single platform. On the SR99 Tunnel Project, the integration software developed by Soldata (Geoscope) is used as the global data management software and integrates the data from the manual survey, but also the AMTS, the geotechnical sensors, and the tunnel boring machine, among other sources. The software also filters the data and manages alerts through email and text messages. The contractor, the owner, and the third parties affected by the construction have a live access to the project data in real time through the internet, with a physical server located in the project’s main office.

Boris Caro Vargas is the general manager and Loic Galisson is a project manager, both with Soldata Inc, overseeing the SR 99 Tunnel Project monitoring. 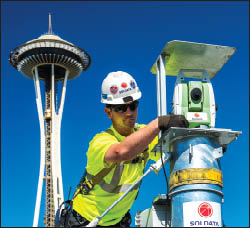 Soldata was born in 1992 in London. Although 20 years is young compared with the age of other construction companies, it is an eternity in the monitoring world, especially automatic monitoring. Since its launch, the company has been working on most of the major tunnel projects around the world, starting with the Jubilee Line in London. Soon after that, a branch opened in Hong Kong to answer the needs related to the boom in underground construction for subways in Southeast Asia. Soldata then continued its expansion, working on other mega-tunnel projects in Europe (Amsterdam North/South Line, Budapest Metro Line 4, Barcelona L9 and High Speed Rail, Toulon South Tunnel, and more recently Cross Rail and the Bucharest Metro), as well as in other parts of the world. Soldata installed the first AMTS to monitor 3D movements in real-time in the U.S. in Puerto Rico in 1998 and has recently been working on major tunneling projects across the U.S. and Canada (Spadina Subway Extension in Toronto, Alaskan Way Tunnel and recently the Northgate Link Extension in Seattle),. Soldata also has experience in other construction fields, such as urban excavation (City Creek Center, SLC and Children’s Hospital in Richmond, Virginia), dams (Big Tujunga Dam and Dover Dam), historical structures (Provo Temple, Richmond Capitol), ports (Freeport Terminal 7 and Port Of Miami), and the 3D absolute deformation monitoring for existing tunnels (LA Metro Red Line and DC Metro Clarendon Station). Soldata has continuously developed new products and services that are now standard in the industry and was a pioneer in the use of AMTS for 3D real time monitoring. With a strong R&D and IT departments, Soldata has developed in-house software to process the data of AMTS and more generally to integrate the information from any external sensor type used in the monitoring industry. In addition to being a pioneer in many ways, Soldata is widely viewed as a global leader for construction monitoring services.