A Phoenix-based landscaping company tries mobile mapping to collect “big data” quickly for a plant density study. Their high-tech solutions illustrate the increasing importance of spatial data management for everyone.

When people think about landscaping, “high tech” doesn’t immediately come to mind. After all, this is work involving dirt, manual labor, and plants. Mechanical engineering may be represented in the form of a backhoe loader, for example, but that’s about as technical as the industry gets. Right?Anyone inside the industry would tell a different story. This is a field characterized by large inventories and a wide range of variables affecting product and service quality, starting with weather and soil. The convergence of these variables creates the need for a great deal of plant-growth monitoring. As a result, landscaping companies that seek to be profitable over the long haul rely on data for decision-making.For landscaping companies that do business in the desert Southwest, such as DLC Resources in Phoenix, the need for monitoring is even greater due to the harsh environment. The area receives only about eight inches of annual precipitation on average, so optimizing the volume of water used for irrigation, for example, is a high priority for landscapers. Here a strong focus on water conservation is a major component of cost control. 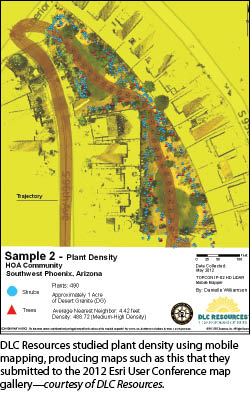 For years, DLC Resources has embraced technology by employing geographic information system (GIS) databases to inventory and monitor thousands of plantings at numerous properties. Its certified arborists have relied on these data to schedule optimal tree maintenance. But DLC Resources has sensed an opportunity to improve its processes, as companies in many industries do whenever technology becomes available to replace manual labor routines, allowing professionals to refocus their efforts on managing outcomes. In this case, an arborist occasionally visiting a site to sample tree condition is one thing; going from site to site and inputting data for every single growing thing into a handheld data collector is quite another.Recently, DLC Resources conducted a pilot study of plant densities at one of its properties to evaluate the water demand of several plant species in the dry climate. At the same time, it was a technology pilot project: The company has taken technology adoption to another level in an attempt to improve data collection efficiency and increase the robustness of its GIS data.

In spring 2012, two professionals at RDO Integrated Controls (RDOIC), a division of RDO Equipment Co., approached DLC Resources with a potential solution for improving the efficiency of gathering data from its considerable inventory. Product specialist Nik Smilovsky, MS, GISP and survey account manager Yon Egusquiza, both of whom had just joined RDOIC, introduced DLC Resources to the idea of using mobile mapping technology to collect “big data” and build an even more robust GIS database of the landscaper’s properties and plantings. Initially at least, RDOIC would provide mobile mapping as a service.For that purpose, RDOIC uses Topcon Positioning Systems’ IP-S2 HD system that they mount on the back of a pickup truck. It consists of a dual-frequency, dual-constellation global navigation satellite system (GNSS) receiver that establishes the geospatial position of the vehicle; an inertial measurement unit (IMU) that tracks vehicle attitude (pose); a long-range lidar sensor head equipped with 64 lasers that captures high-resolution, high-density point clouds at up to 100 meters away that are time-stamped; and external wheel encoders that capture odometry data from the vehicle. In addition, a high-resolution digital camera captures 360-degree images. 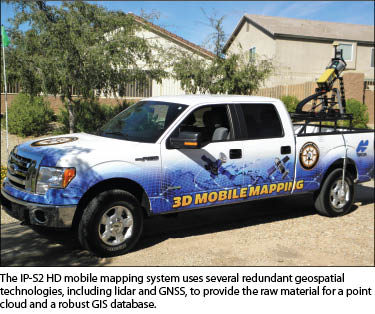 Every second, the scanners collect 1.3 million x, y, and z points that are used to obtain accurate geospatial positions for assets. Integration of these technologies creates a three-dimensional position for the vehicle and provides accurate tracking in challenging or denied GNSS environments. A laptop computer inside the truck uses a Web browser to communicate with the bed-mounted equipment via an ethernet cable; data collection does not require an internet connection.While en route to a property in the southwest valley of Phoenix that DLC Resources manages, Smilovsky pointed out that the company’s mobile mapping pilot project indicates that it is an early adopter of the latest GIS technology. A plant density study that uses mobile mapping follows the spirit of DLC Resources’ WaterRight Program, designed to make better water-management and budgeting projections.At the property, Danielle Williamson, GIS analyst with DLC Resources, looked over a roughly one-acre common area within a homeowners association (HOA). At this development, DLC Resources manages a variety of local climate-tolerant plant species such as Mesquite trees, Oleander shrubs, and Lantana ground cover, in addition to areas covered by turf and decomposed granite. “One of the things we really wanted to dial in a little better was our water budgeting,” she said. “We needed to understand plant densities at our properties a little better.” DLC Resources had traditionally compared plant densities at all of the communities it manages and categorized the density as high, medium, or low. The problem has been accurately identifying the actual density so that each property could be categorized appropriately, though. 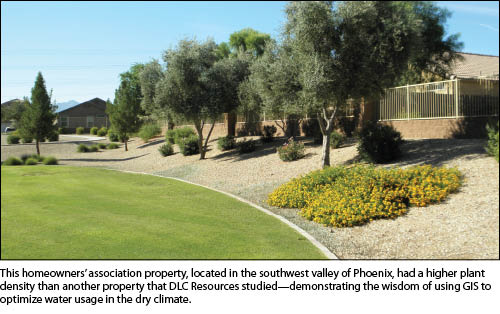 This property appeared to have a higher plant density than most, and Williamson wanted to put the density into an accurate perspective. The onsite data collection and input might have taken a couple of days using the conventional walk-around method, Williamson noted. “They drove through this one-acre area and collected the data in just a few minutes,” she said of RDOIC’s mobile mapping process.After the collection process, the data were exported from the hard drive of the computer in the pickup truck cab. Point cloud and photographic data were imported into Spatial Factory, which merges the imagery and lidar point cloud data layers, allowing Williamson to view, analyze, and extract features from the data. Williamson digitized the plantings, contrasting them with the background. She then exported the digitized imagery as a shapefile and also calculated the plant density for DLC Resources’ water department. The density of a plant every 4.42 feet is medium-high compared with DLC Resources’ other properties. Defining variables specific to this property was critical to calculating the volume of water per acre-foot.

Based on this study, Williamson built density models to allow DLC Resources to make accurate water budgeting projections for its properties. She used Esri ArcMap to calculate the average distance between plants and used Euclidean distance (the distance between two points), which better suited linear distance measurement from plant to plant, as opposed to Manhattan distance, which measures the linear distance between right angles. She also measured the average distance between plants using “nearest-neighbor” calculations and approximated a plant density.In a second sample area, the observed mean distance between plants, i.e., plant density, was 4.42 feet. Williamson calculated the area as 1.14 acres.Comparing the plant density at this property with another of DLC’s communities in the southeast valley of Phoenix, which has a much lower plant density, illustrates the importance of precisely calculating plant density for the purpose of optimizing water consumption. The highest plant density at the HOA in the southwest valley was 606 plants, compared with only 103 at the smaller of two samples at the HOA in the southeast valley. The higher-density HOA needs 1.09 gallons per acre-foot (1 cubic foot of water spread across 1 acre), whereas a lower density HOA needs only 0.19 gallons per acre-foot.The higher-density HOA needs 355,179 gallons per acre; the lower-density only 60,368 gallons per acre. At an average water cost of $4 per 1,000 gallons, DLC Resources can reliably estimate a water cost of about $1,421 per acre for the higher-density HOA and $241 for the lower-density HOA. A water cost difference of about $1,180 between the properties illustrates the importance of customizing water consumption for sites in the desert Southwest according to their unique characteristics.For a company like DLC Resources that manages numerous properties, the need to conserve water and provide more reliable information to customers is obvious. What is daunting is the task of collecting all of the data necessary to accurately project water consumption and costs.Jim Holbert, special services director for DLC Resources, noted that the annual water cost for a property like this one might be half a million dollars. “The study that Danielle is doing here helps us to determine the water budget, but it also helps us project so we can determine in the future how much a community like this needs for its budgeting purposes,” he said of the higher-density HOA.“It helps us bid on new contracts as well,” Holbert continued. “We can say, based on your plant density, based on the acres of turf, we know that you’re going to spend $X and we can use that as a differentiator between ourselves and the competition. We can say that we can save you X% over what you’re spending now.” The study is part of a continuous improvement process. Over time, DLC Resources has reduced water waste with measures such as balancing out its irrigation system and changing out sprinkler heads. “You put it all together—data, expertise, and the people out in the field—that’s where the real savings are,” Holbert concluded.Williamson printed maps and point cloud images from this study for the 2012 ESRI Users Conference in San Diego and submitted them to the conference map gallery.

By early fall 2012, DLC Resources had begun to get an idea of how the plant density study could affect its sales proposals for similar properties in 2013 and beyond. “The math checks out, and there is a huge difference,” Williamson noted.For DLC Resources, using mobile mapping in the plant density study might be a preview of additional data analysis capabilities. The company offers additional site improvement services such as hardscaping and masonry construction, which create the need for more asset inventorying. “They have to come up with a quicker, more efficient way to inventory not only trees but also items such as sidewalks and gutters,” Smilovsky said. “Mobile mapping is just a quicker, more efficient way to catalog the information.” Additional botanic monitoring capabilities present themselves, too, he added. “Change detection” analysis using specially designed computer applications might follow periodic data collection of plant assets using mobile mapping. Using such a process, it would be possible to develop pruning schedules for certain species, Smilovsky pointed out.Holbert said he can see an opportunity to help HOAs enforce homeowners’ compliance with bylaws. The imagery captured by mobile mapping could be used to settle disputes, for example.