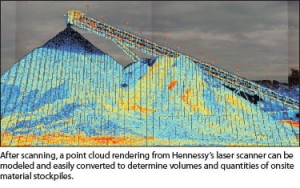 With decades of survey experience under his belt, Barry Hennessy is no stranger to—nor is he resistant to—change. He has seen the industry, the technology that supports it, and his business evolve over time. So when presented with the opportunity to employ new laser scanning technology, it’s not surprising that he embraced it for the opportunities it presented. Today that technology is a major part of his Ft. Branch, Indiana-based construction and land surveying business and has taken it in directions he never foresaw.

Founded in 1988 as a general surveying company, Hennessy Surveying, Inc. has grown in many ways, including adding Barry’s son Kevin, an Indiana licensed land surveyor, to the company. The younger Hennessy specializes in locating and documenting core and section corners for a vibrant Indiana coal industry, while his father has also served that industry—and others—providing myriad services.

“There’s no doubt we’ve evolved as a company since starting out, and a real turning point for us was when we fully embraced GPS as a part of our operation.” Hennessy said. “We‘d used a basic system to get us up and running, but in 2004 we purchased our first Topcon HiPer receiver and, around that same time, became something of a Topcon dealer for this area.

“Our contracts with the local mines afforded us a nice opportunity to show them the benefits GPS and machine control could bring to their operations. Before long we were selling them machine control systems for dozers, excavators, drills, and other equipment. It’s been so well received that the mines, in some cases, have insisted that their contractors also be GPS savvy, often leading to additional system sales.”

He adds that servicing the mines has also allowed his company the flexibility to weather the recent economic storm better than most. “Because the construction sector was hit so hard, having a steady flow of work from the mines sort of insulated us from the worst of it. We felt the downturn—make no mistake about that—but we were in much better shape than a lot of survey companies that were tied heavily to construction.”

One of the keys to Hennessy Surveying’s success has been the ability to recognize trending opportunities and broaden its breadth of services. While adding an area of expertise has often been the result of a client request, there have been times when, recognizing the capabilities available with their laser scanner, they created new opportunities. 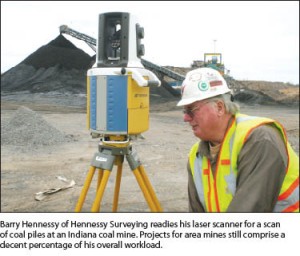 “Just by nature of its function, laser scanning is ideal for as-builts,” said Hennessy. “We do a fair share of construction-based work providing that service. However, we recently finished a project at the former Indiana Army Ammunition Plant in Charlestown, Indiana that involved moving several large powder storage tanks. The customer wanted to make the re-installation process as smooth as possible. So, we scanned the tanks in place before movement, then brought that scan into Topcon’s ScanMaster software, created a CAD file and provided the customer with all the measurements for the openings, heights, and elevations. That allowed them to go ahead and pour concrete in advance, place the necessary mounting bolts—basically have the new site ‘install-ready.’”

He said the size of the tanks—about 40 feet in height—would have made use of traditional surveying techniques nearly, if not altogether, impossible. “And, because the scan essentially gave them a 3D as-built representation, it helped tremendously during the reinstallation process.”

As mentioned, the work Hennessy does for area mines has been something of a mainstay for their operation. That work, however, has been varied in nature and includes creating digital models for use in machine control-equipped dozers, excavators, and drills used as part of the mining operation. 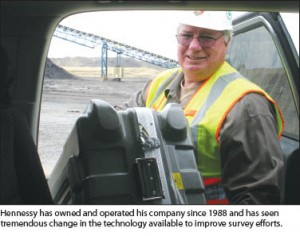 “GPS and machine control are playing a larger and larger role in many facets of today’s mining operation,” he said. “You can put it on a drill and know exactly where you are onsite at all times and know where each and every hole should be drilled.

“There is also a huge push for post-mining land use, so we are taking plans that have been approved by the state and creating models for companies for use in their machine controlled dozers. With that, whether it’s day or night, the operator knows all the cuts and fills and doesn’t have to rely on stakes. It’s really streamlined things for operators and been a nice source of business for us.”

Hennessy says his scanning capability has also allowed him to get directly involved in some of those post-mining efforts. When pits have reached their end-of-life, mining companies often have to fill and develop that hole. Determining the volume of material needed to do that was, in the past, a long, grueling effort. For Hennessy and his clients, laser scanning has simplified that task.

“When the mining operation wraps up, these pits often have water and mud in them—not the best environment for a survey effort,” he said. “However, we can scan that hole, create a CAD file for the mining company, and they can calculate what it’s going to take to fill it; it’s fast, safe and accurate. The laser scanner accurately scans 1,500 feet in any direction, so in just a few minutes we can scan surfaces up to 3,000 meters apart. I actually sat at the bottom of a 40-acre pit one time and scanned the whole thing in about ten minutes. Doing so created a file with about five million points; obviously that wouldn’t even be considered with traditional GPS.”

Hennssy’s idea to employ a laser scanner in his survey business was initially in response to an article he had read in a trade publication. The surveyor in that story said that he used his scanner at every possible opportunity.

“And that’s exactly what we’ve found here; new uses for it appear almost weekly,” Hennessy said. “But for us it’s also been regularly at use helping mining companies generate volume reports and calculations. From a safety aspect it can’t be beat. Most mines don’t want surveyors climbing on their stockpiles; with a scanner we simply set up in two different locations adjacent to the target pile and take our scans.”

From there, he said, the point cloud data from the scanning session is loaded onto an SD card (that’s his preference for data transfer, although Topcon’s GLS-1500 does offer remote transfer of data to a PC through USB or wireless LAN), taken back to the office for downloading, then imported into ScanMaster to assign values to the point cloud data. While ScanMaster is designed to actually develop the volume calculations, Hennessy says that most of his mining clients typically want to generate those numbers themselves—he just makes it dramatically faster and easier for them to do so.

“We take the DWG or DXF file created in ScanMaster, import it into AutoCAD, develop a contour map of that pile—either a grid map or a tin file—for triangulation, and turn that over to the customer. We do have a customer, however, for whom we do all the calculations: we tell them how much overburden they’ve removed, how much coal has been moved, how much is still left in the pit, and so on. We do the entire process for them—and we do it all in one day. Over the years we’ve really gotten this down to a science.”

The versatility his scanner allows the company continues to lend itself well to landing new work. Hennessy said they are in the final stages of a bid for an auditorium construction project that seems well-suited to the strengths inherent in laser scanning.

“This is a concrete structure in which much of the steel has to connect to imbeds in the concrete. So a high-quality as-built needs to be done to ensure that the connections are all correct. Done traditionally, it could be a real headache. For us though, we will simply scan the structure and, using ScanMaster, put intelligence to it. The elevation of every connection—and how each one is lined up—will be available and verifiable. I’m confident we will get this job because of the scanner. Laser scanning is not just a great capability to bring to the table, it’s helped define who we are today.”