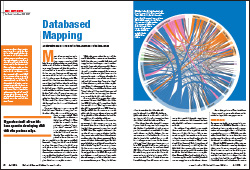 PSM’s April issue begins the series Databased Mapping, about building the ultimate surveying database that not only stores surveying project data but also structures it to be able to produce accurate reports, analyses, and visualizations that do not depend on the way the data itself is stored.The Web of Things
The theme of our Web Waypoints series since the first article in December 2011 has been the impact of web technology on GIS and, in turn, our profession. The initial article discusses the concept of the geoweb: location data married with the power of the internet’s global communications and technology. The geoweb is significantly more than just web-accessible geodata: the ability to dynamically display geographic data from various online sources using open-standards web services means that there is no need to download, convert, and integrate proprietary-format GIS datasets. In fact, you can utilize web technology to work with geospatial data on your local computer, but we’ll leave that twist for a future Web Waypoints article. The web is not only a powerful internet communications protocol delivering content on free browser software; it has also fostered the movement towards open-source geospatial data handling. By being open, as well as an international standard (ISO 15445), the web has spawned internet-technology collaboration efforts on a global scale. This, in turn, begat an abundance of open-source software development, especially in the areas of geospatial data storage and software. Parallel to proprietary GIS vendors, a spectrum of powerful, freely available geocentric software has been created, including:

Many of these have been described in our Web Waypoints series. Our point is that GIS users are suddenly in possession of arguably better tools with turn-on-a-dime development environments that are poised to challenge the established vendors.With the increasing availability of high-speed wired and wireless internet transmission channels, using web services is often just as fast, or faster, than desktop-bound software for many geospatial processing tasks. This is the happy confluence of technologies that makes the web such a game-changer for all modern businesses—including surveyors.

Is GIS Dead?
Notice that we’re not talking about GIS here, per se. “Spatialness” is just one part of the traditional who/what/why/when/where information paradigm. GIS stopped being unique once GPS hardware became a standard component of every smartphone. Positioning knowledge is now consumer mainstream. So, although the GIS ship sailed without surveyors, it may be on its way to being marooned by the geoweb-proficient professionals who are ignorant of the standard that GIS should be used only by database-proficient folks with proprietary software. The true marriage of geospatial data with the internet—via the web—is still in its infancy. This is why you’re seeing proprietary GIS companies quickly changing course to a web-centric marketing strategy.

Long Live the New GIS ParadigmThe focus going forward for positioning experts should be the accuracy and management of geospatial data en masse—leveraged by the web. My crystal ball tells me that these should be the winning short- and long-term bets for surveyors who embrace the web and its open-source software cornucopia as an integral part of their business models.Short-term goals:

In a way, maybe it’s a good thing we didn’t get on the GIS bus after all. We would have been forced to the back and frustrated by trying to adapt our practices to the desktop GIS paradigm. Instead, we’re poised on a new frontier that values data first and foremost, developable by open-source tools that make the data available on an open-standards, globally accessible medium. This time around, we can drive our own bus.